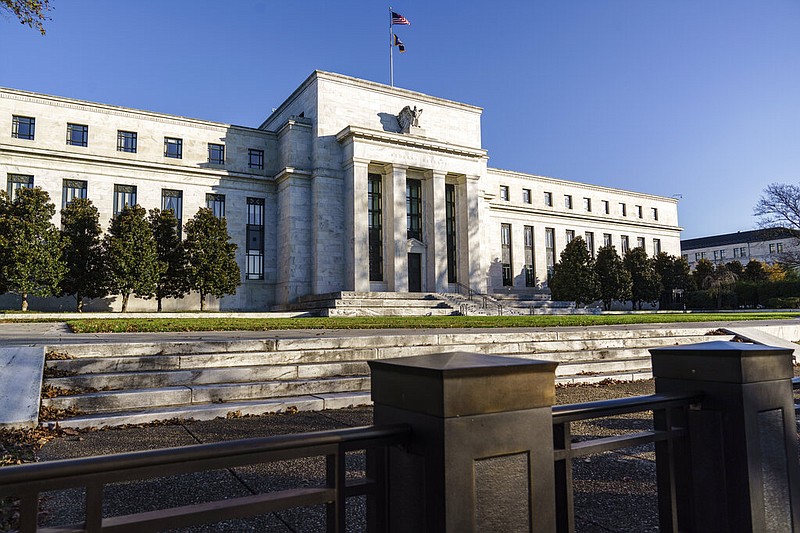 The Federal Reserve building in Washington is shown in this Nov. 16, 2020, file photo. (AP/J. Scott Applewhite)

Manufacturing continues to hum along in Arkansas as other sectors struggle to overcome price increases, hiring challenges and supply-chain disruptions, according to a report Wednesday from the Federal Reserve Bank.

Nevertheless, a regional economist with the Fed office in St. Louis projects employment growth will remain strong in Central Arkansas and other key regions of the state throughout this year.

"We'll probably see a fairly fast track continuing at the 2021 pace over the year," economist Nathan Jefferson said Wednesday, noting that economic growth likely will slow into 2023. "2021 has been a relatively stronger employment recovery but it's likely just to be through this coming year."

Arkansas registered strong job growth in the last few months of 2021 and statewide unemployment dipped to 3.4%, tying a record low going to May 2019. The state also reached a record low number of unemployed in November, when 46,351 Arkansans did not have jobs. The previous month there were more than 50,500 Arkansans without jobs.

On Wednesday, the Fed released its latest Beige Book report that outlines economic conditions across the nation. The Fed reported that the overall economy in Arkansas and the region remain steady and unchanged from the last Beige Book issued in December.

Arkansas is part of the Fed's 8th District, which also includes parts of Illinois, Indiana, Kentucky, Mississippi, Missouri and Tennessee.

"We saw, across the whole district, some continued moderate improvement of economic conditions," Jefferson said. "The two key issues that remain, and that we've seen for a while now, is we have employers continuing to struggle to hire and some supply chain issues."

Even with that, manufacturing continues to improve in the state. "Manufacturing activity has continued to increase at a robust pace since the previous report, although the rate of growth has leveled off," the Beige Book said. "Firms in both Arkansas and Missouri reported a strong uptick in new orders and production."

At the same time, however, manufacturers are being slowed as inventory levels fall and much-needed parts and equipment are hard to replace because of supply-chain challenges.

As for the pandemic, the omicron variant of covid-19 seems to be only producing a "short-term uncertainty" and business owners do not appear to be overly concerned it will have a lasting economic effect, Jefferson said.

There are pockets of the economy where the hiring shortage is crippling. For instance, Jefferson said one Arkansas school district had an extreme shortage of school bus drivers it was working to overcome. "They're pretty much pulling any commercial licensed driver they can find," he added.

Likewise, competition for skilled labor in the construction industry "has become highly, highly competitive," and one manager noted that other builders are going to his work site to recruit craftsmen.

Real estate in the Little Rock metro area, as elsewhere in the district, has seen housing inventories tighten as sales increase and fewer homes are built because of higher prices for materials and delivery delays related to the supply chain slowdown.

Yet the Beige Book also noted there is a "continued high demand" for commercial real estate, especially industrial properties to support distribution, warehousing and manufacturing operations in Arkansas.