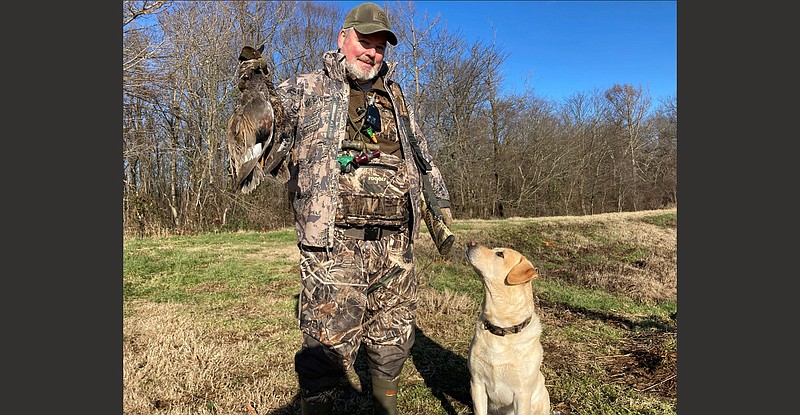 Despite a promising sunrise, Cooper the Labrador retriever only had two gadwalls to retrieve during Wednesday’s duck hunt with Joe Volpe, Shawn Tobin (above) and the author. (Arkansas Democrat-Gazette/Bryan Hendricks)

I thought that Wednesday's breaking dawn would be the spotlight to an epic duck hunting performance.

Instead, it was more like a flash of light from the opening and closing of a refrigerator.

The occasion was an annual duck hunt with federal magistrate judge Joe Volpe and Shawn Tobin. You've got your regular, ordinary hunting companions, the ones that hold ordinary conversations about ordinary topics and tell more or less socially acceptable jokes and stories.

And then you've got people like Tobin, the living equivalent to a giant joy buzzer. In his presence, there is no such thing as an ordinary conversation. With him, conversation is a centrifuge that flings all topics into space like shrapnel.

"His mind is like a hamster wheel," Volpe said. "It's always churning. He worries about everything. The simplest little thing takes on catastrophic proportions with him.

"On the other hand," Volpe continued, "he's also one of those rare guys that, if you call him up at 2:30 in the morning to pull you out of a ditch, he's the one guy that will answer the phone and get out of bed and come help you."

"We need to have the decoys out and be ready at first shooting light," Volpe said. "Whatever happens will probably happen early."

I have hunted this place several times over the years. It attracts mostly mallards and gadwalls, but it also attracts pintails, teal, northern shovelers and assorted diving ducks.

"We had a ton of wood ducks using this place earlier in the season," Volpe said. "They'd pile into that corner over there, and then start leaving in twos and threes. We'd get a limit of wood ducks early, and then finish up with other ducks."

"Yeah, Volpe's been sending his wings to the Game and Fish," Tobin said. "They sent him a letter back telling him to quit shooting so many wood ducks."

"They did not," Volpe said, lighting the fuse for the morning's fireworks.

Ducks showed up immediately at first hunting light. Several groups flew over the decoys but did not work. A duck that appeared to be a merganser landed and swam among the decoys.

A pair of big ducks cupped their wings, dropped their feet, hovered over the decoys momentarily and then flared before flying behind us.

"We should have shot them," Volpe said.

"No they won't," Volpe said. "They landed in the pond behind us."

Two ducks dropped their feet and braked their descent with rapid downward wingbeats before landing in the open space between the decoys. Two shots stilled a gadwall drake and hen, which Cooper retrieved flawlessly.

"I'm telling you the first two were mallards," Volpe said. "They landed back behind us. I watched them."

"Well, if that's true, and I don't concede that it is, then that just goes to show you how mallards have no appreciation or consideration for the hard work of others," I said. "You and Tobin worked your tails off to place those decoys just right ..."

Tobin laughed so hard that he inhaled his coffee and blew it out his nose.

"Instead of arguing with the host, the better thing to is to say thank the host for inviting you out here," Volpe chided.

"As I was saying, you and Tobin worked especially hard to put out those decoys in just the right spot so that no duck could resist them. And I thank you sincerely for the honor and pleasure of hunting with you gentlemen. And unlike me, those mallards rejected your gracious invitation. Only a gadwall has the good manners to reciprocate your hospitality."

"Man, you are so full of ..." Volpe began, but again Tobin choked on his coffee and blew it out his nose.

"Stop it! You guys are killing me!" Tobin said, coughing.

On the drive to the hunt, Volpe marveled at Tobin's propensity to worry some inconsequential picayune of preparation into a catastrophic, hunt-ending disaster. It came to light about 30 minutes after we killed the gadwalls. We saw no other ducks after that, and Tobin began fretting that a lone decoy that strayed from the rest and drifted far beyond the spread would cause any new arrivals to land out of range.

"Here we go," Volpe said. "The hamster wheel is starting to spin."

Volpe's dismissal of the idea provoked Tobin to defend his hypothesis. Somehow, this discussion magically morphed into an argument about whether or not low back pain is a symptom of covid's omicron variant.

"And Tobin always backs these things up with some obscure study from East Timor or someplace," Volpe said.

"Well, this study is from South Africa," Tobin countered.

"As I said," Volpe said, sarcastically.

And thus began a whole new argument that deftly morphed into a debate about something equally unrelated, drifting us ever farther from the discussion about the wayward decoy. The closest we came to returning to that subject was Tobin's speculation that a weighted oil jug bobbing near the bank is a liability because it flares ducks.

"Doesn't seem like a hard thing to take the jug out of the water. I mean, it's like, forty yards away."

"Yeah, but Tobin can't make up his mind about it," Volpe said.

At some point, the joy buzzer activated, most likely with the telling of a couple of jokes unsuitable for polite company.

At any rate, we ended the hunt with two gadwalls and aching ribs from laughing, and with Tobin's lungs coated with inhaled coffee. We suspect that there exists an obscure study that suggests inhaled coffee is an effective remedy for warding off omicron.