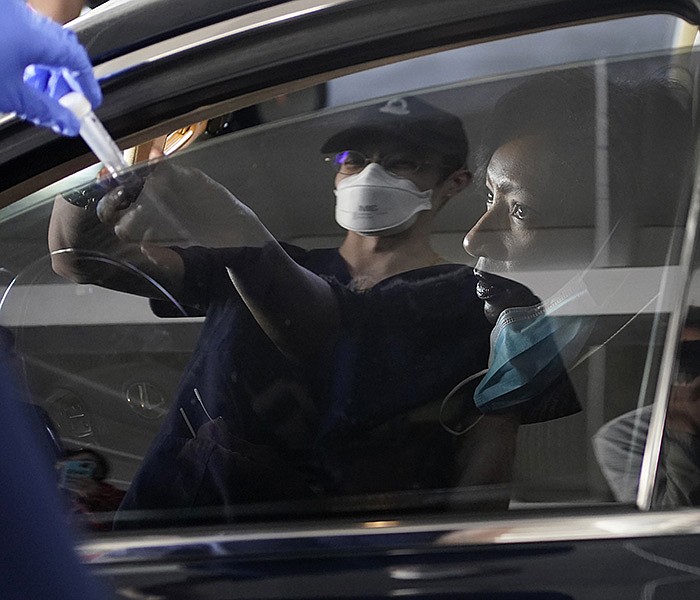 Tanya Flanagan hands a nose swab back to Kenneth Williams after administering herself a covid-19 test Wednesday in North Las Vegas, Nev., during a preview of a testing site. (AP/John Locher)

The White House is promising to provide 10 million free coronavirus tests each month for schools, aiming to help keep classes in person at a time when testing across the country is uneven and, in some cases, virtually nonexistent.

President Joe Biden has pushed schools to open and stay open for in-person learning, saying he is mindful of the academic and social-emotional damage wrought by remote learning. Analysts say there also are political risks among frustrated parents who crave normalcy and fully functioning schools.

The push comes as the Biden administration faces mounting criticism over long lines and supply shortages for testing nationwide. The White House on Wednesday announced that Dr. Tom Inglesby, the director of the Johns Hopkins Center for Health Security at the Bloomberg School of Public Health, is joining its covid-19 response team to oversee its testing initiatives.

Education Secretary Miguel Cardona said students need to be in their classrooms, and the announcement shows the administration's commitment to helping schools stay open.

"We're doing everything we can to make sure that our children have an opportunity to stay in school," Cardona said Wednesday on "CBS Mornings." "That's where they need to be, and we know we can do it safely."

[Video not showing up above? Click here to watch » arkansasonline.com/113variant/]

The administration said it would distribute 5 million free rapid antigen tests to kindergarten-through-12th-grade schools each month. The White House said it also was making lab capacity available to process an additional 5 million PCR tests, which screen for the presence of genetic material from the virus and are more accurate than antigen tests, though they take longer to produce results.

The White House said states will be able to request tests, and the first shipments were expected later this month.

The first days of school in 2022 have been chaotic, with large numbers of teachers and students absent because of illness and some teachers and students campaigning for a return to virtual school. But the vast majority have remained open, and teachers unions in most of the country have gone along with in-person plans.

Tracking by the data firm Burbio found that on Monday and Tuesday, about 2,700 public schools had in-person learning disrupted, a small slice of some 100,000 K-12 schools in the country.

Districts have struggled to set up coronavirus testing and, until recently, many did not see it as a priority. In September, a Washington Post survey found just four of the nation's 20 largest school districts were screening asymptomatic students, who can infect others even though they have no symptoms.

Separately, a review at the time by the Center on Reinventing Public Education found that only 14 out of 100 large and urban districts were screening students routinely.

With the rise of the omicron variant, more schools are attempting testing, but with mixed results. Teachers in Broward County, Fla., were given expired test kits. In Chicago, thousands of at-home student tests conducted as the winter break concluded were destroyed.

Lawmakers at a Senate committee hearing Tuesday repeatedly pressed Biden administration officials on the nation's testing strategy and guidance for schools. Sen. Patty Murray, D-Wash., who chaired the hearing, told officials that she was "frustrated" with the continued uncertainty over how schools would navigate the omicron surge.

[Video not showing up above? Click here to watch » arkansasonline.com/113calif/]

"I'm hearing from schools in my state that they're worried they'll have to shut down again if they can't get the support for testing they need or they have staff shortages because of staff who are ill," Murray said. "When we talk about these problems, we have to be focused on solutions. You can't just say our schools must stay open."

In New York City, an unknown number of students walked out of schools around lunchtime Tuesday to protest what many called inadequate protections against the coronavirus -- and to demand an option for remote learning until conditions improve.

Those who took part in the walkout, which appeared to have been organized by a group of students on social media, called for more robust measures, including more testing and better health-screening measures to identify positive cases. In the short term, the students wrote on Instagram that they seek a return to remote or blended learning.

On Wednesday, students in the nation's third-largest district returned to classrooms after Chicago Public Schools canceled five days of classes amid a standoff with the teachers union over covid-19 safety protocols.

Their return happened the same day the full membership of the Chicago Teachers Union gave their stamp of approval to the hard-fought safety plan that includes expanded testing and metrics to shut down individual schools during outbreaks.

Leaders of the union gave their tentative approval two days earlier allowing children to return. They urged members to accept it, acknowledging that teachers didn't get initial demands including a commitment to use remote learning districtwide during a surge of covid-19 infections.

Union President Jesse Sharkey said the agreement "wasn't a home run" but was "as much as we could get right now."

The strike, roundly condemned by several prominent Democrats such as Illinois Gov. J.B. Pritzker and Chicago Mayor Lori Lightfoot, is being seen as an example of how Democrats are speaking out more forcefully against covid-19 school closures, recognizing a rising anger among parents worried that their kids are falling behind.

But in doing so, Democrats risk angering some teachers unions, which are advocating for more protections for educators as the omicron variant takes hold and whose support helped get Democrats elected.

"When you tell a parent that their kid can't be in school -- a lot of times politics doesn't touch people's lives, but that's a massive impact on parents' lives that p***** them off," said Brian Stryker, a Democratic pollster based in Chicago. "The Chicago strike may be the moment when Democrats said: 'Enough. We're done with all these.'"

In another school-related development, authorities said distrust, misinformation and delays because of the holidays and bad weather have combined to produce low covid-19 vaccination rates in U.S. children ages 5-11.

As of Tuesday, just over 17% were fully vaccinated, more than two months after shots became available to the age group. While Vermont is at 48%, California is just shy of 19% and Mississippi is at only 5%.

Vaccinations among the elementary school set surged after the shots were introduced in the fall, but the numbers have crept up slowly since then, and omicron's explosive spread appears to have had little effect.

Parents who hesitate "are taking an enormous risk and continuing to fuel the pandemic," Murphy said.

Information for this article was contributed by Annabelle Timsit, Laura Meckler and Dan Diamond of the Washington Post; and by Zeke Miller, Darlene Superville, Lindsey Tanner, Sophia Tareen, Kathleen Foody, Nicholas Riccardi and Collin Binkley of The Associated Press