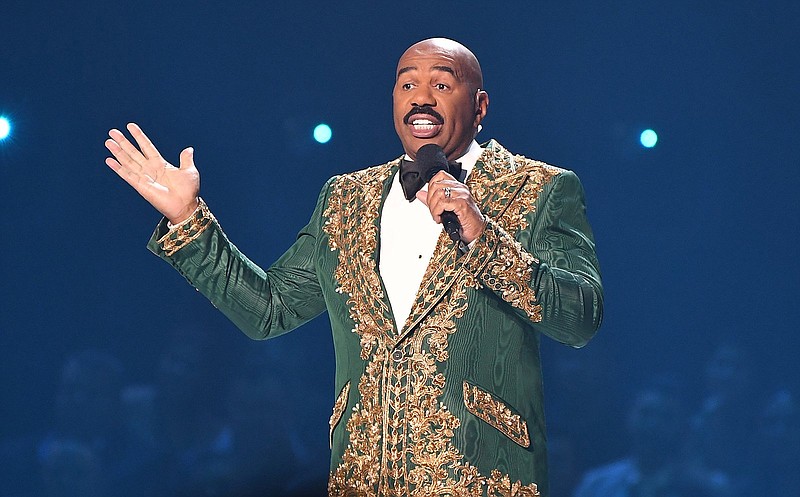 ATLANTA — Steve Harvey has never been to law school. He has no legal degree.

But millions have listened to the comic's advice on his multiple talk shows and bought his many bestselling self-help books. So it only seems natural for the man to star in his own prime-time show on ABC dubbed "Judge Steve Harvey."

The series, now available on Hulu, was shot at Trilith Studios last fall in Fayetteville, just south of downtown Atlanta.

And while the small-claims cases are similar to those seen on the likes of "People's Court," the secret sauce is Harvey's knack for interacting with people and entertaining the audience.

The cases could be two neighbors squabbling over a damaged fence, a son who won't pay rent or a woman who used money her sister set aside for their brother's funeral for plastic surgery.

Myeshia Mizuno, one of the show's executive producers who oversaw Atlanta-based judge shows like "Lauren Lake's Paternity Court" and "Couples Court With the Cutlers," said the basic concept came from the fertile mind of Harvey himself.

"He has a wealth of knowledge," said Mizuno, who splits time between Decatur, Ga., and Los Angeles. "He has such a unique history himself. He went from rags to riches. He relates to people. He can sometimes be unpolished and people appreciate that."

Mizuno said she just had to find entertaining people who could tell their stories succinctly.

(On a more serious note, only 28 states require a law degree for judges to preside over misdemeanor cases, according to a 2019 ProPublica investigation. That's not the case in 22 other states, including Georgia. In Georgia, magistrates aren't allowed to preside over trial juries and municipal court judges must have a law license to handle criminal cases.)

Harvey, 64, during the first episode doesn't even pretend he is personifying an actual judge. When an evasive defendant who had just admitted using funeral money for liposuction utters, "I plead the fifth," Harvey cracks, "You must think this is real court!" He then bangs his gavel several times while laughing.

He then leaves the bench area and summarizes the situation while pacing in front of the plaintiff and defendant as would a real attorney.

During another case, Harvey watches amusingly while the two sides go at each other and takes a sip out of a glass. "If this was scotch," he says, "I'd be set!"

Unlike a real courtroom, the audience is free to stand, cheer, whoop and boo. And Harvey even uses a catchphrase after he makes his verdict: "That's the way I see it!" Indeed, his verdicts are from the gut, based on his own internal logic as opposed to particular case law.

And the always well-dressed comic decided to ditch the traditional robe. Instead, he dons a custom-made black Dolce & Gabbana suit over a crisp black shirt.

The producers did opt for authenticity in one area: a genuine bailiff in 52-year-old Nancy Price, who works at the Douglas County sheriff's office part time.

Price, who has worked in the legal system since 2015, doesn't say anything in the first episode but the cameras occasionally cut to her for a reaction shot. She said she was there to present evidence and verbally inform plaintiffs or defendants if they were getting out of line.

"I just kept it professional," Price said. "I didn't interrupt or do anything I wasn't supposed to. I had to tell myself that this is just a show. I try to be tough in my regular job. But I had to say to myself, 'Don't be that Puerto Rican girl! Don't get all hot. It's all good!'"

She said she learned a lot just listening to Harvey talk about his own life experiences.

While she tried her best to ignore the cameras and pretend it was a real courtroom, some standard judicial protocols were thrown out the window. It was odd, she said, that plaintiffs and defendants would simply address Harvey as Steve. "You don't call a real judge by their first name in a courtroom," she said.

Price said she was amazed how cogently Harvey could grasp a case's nuances, calling him a "quick study."

In fact, she thinks if Harvey had gone to law school, he would have made an excellent real judge. "He's got common sense and he cares about people," she said. "In real court, the judges don't care if the plaintiff and defendant were best friends or brother and sister. He makes this personal connection that's heartfelt."