The world in brief: India train derailment fatal to 5 people 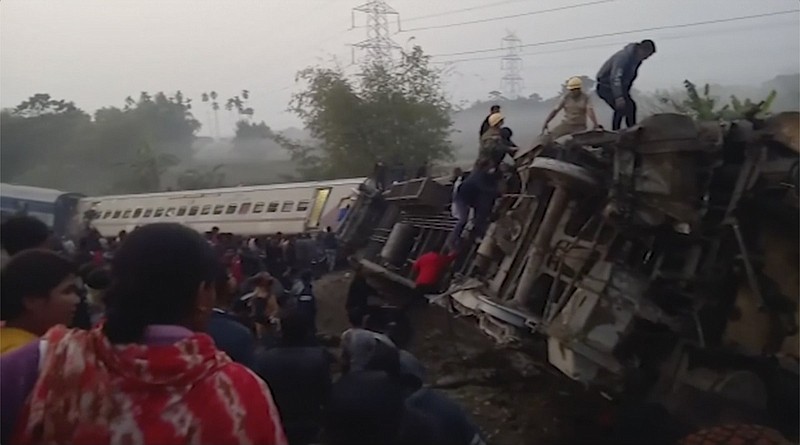 This image taken from video shows rescuers searching coaches after a passenger train derailed Thursday in the Bengal state of India. (AP/KK Productions)

Twelve coaches of the train went off the rails, and three capsized. Images from the scene showed passengers stuck in twisted metal and debris as rescuers rushed to pull them out.

The train was on its way to Gauhati in Assam state from Bikaner, a city in Rajasthan state, when the derailment occurred in Jalpaiguri district.

All of the injured were being treated in a hospital, senior police officer Debarshi Dutta said.

Senior railway official Guneet Kaur said the cause of the derailment was being investigated. She said the government would provide financial compensation to families of the deceased and all of the injured.

Three of the missiles struck within the perimeter of the American Embassy, the officials said. Another hit a school in a nearby residential complex. The officials spoke on condition of anonymity because they were not authorized to talk to the media.

An Iraqi military statement said a girl and a woman were injured in the attack, without providing more details.

The U.S. Embassy in Baghdad said in a statement that its compound had been attacked by "terrorists groups attempting to undermine Iraq's security, sovereignty, and international relations." The embassy's counter rocket, artillery and mortar defense system was heard during the attack.

The top U.S. commander for the Middle East, Marine Gen. Frank McKenzie, warned in an interview with The Associated Press last month that he expects increasing attacks on U.S. and Iraqi personnel by Iranian-backed militias determined to get American forces out.

Travelers to Puerto Vallarta will soon have to follow new vaccination and testing requirements for many activities ordered by the Mexican state of Jalisco.

The state will require proof of vaccination or a negative PCR test result for bars, clubs, casinos and concerts, Jalisco Gov. Enrique Alfaro announced Monday. The requirement, which will take effect today, also applies to other venues such as convention centers and stadiums.

People older than 18 will be required to show proof of full coronavirus vaccination. A negative PCR test result will remain valid for entry for 48 hours.

The new rule comes as Mexico sees a surge in cases, including in Jalisco, after the holiday travel season. According to tracking data compiled by The Washington Post, as of Wednesday, Mexico reported 127 new cases per 100,000 people over the past seven days, with a 174% week-over-week increase in daily cases.

Tlaxcala, a state east of Mexico City, is implementing a similar requirement this week, requiring proof of vaccination to enter places such as supermarkets and hotels, according Forbes Mexico.

Health authorities in Baja California stopped short of a mandate, but they issued a similar recommendation last week. It said businesses such as restaurants, bars and casinos can decide whether to ask customers for proof of vaccination or negative PCR test results.

Crews were trying to clear the rubble to reach the man but had not confirmed that he is alive, said Yoo Man-geun, an official in southern Gwangju city.

HDC Hyundai Development, the main contractor for the project, plans to deploy unmanned excavators to clear the rubble, and use nets and other safety measures in case the structure crumbles further, Gwangju Mayor Lee Yong-seop said. The contractor also plans to remove a damaged crane that had been attached to the building by Sunday to prevent the structure from breaking further.

About 10 vehicles were destroyed, and the occupants of nearly 200 nearby houses and shops were forced to evacuate after the collapse.

The Ministry of Employment and Labor, which investigates industrial safety lapses, said it is questioning HDC's chief supervisor at the apartment project and an official of a partner company that handled the concrete work.

President Moon Jae-in ordered officials to thoroughly investigate the cause of the collapse and come up with new safety measures to prevent similar events.

The Gwangju government has suspended all five of HDC's construction projects in the city as it investigates the collapse. 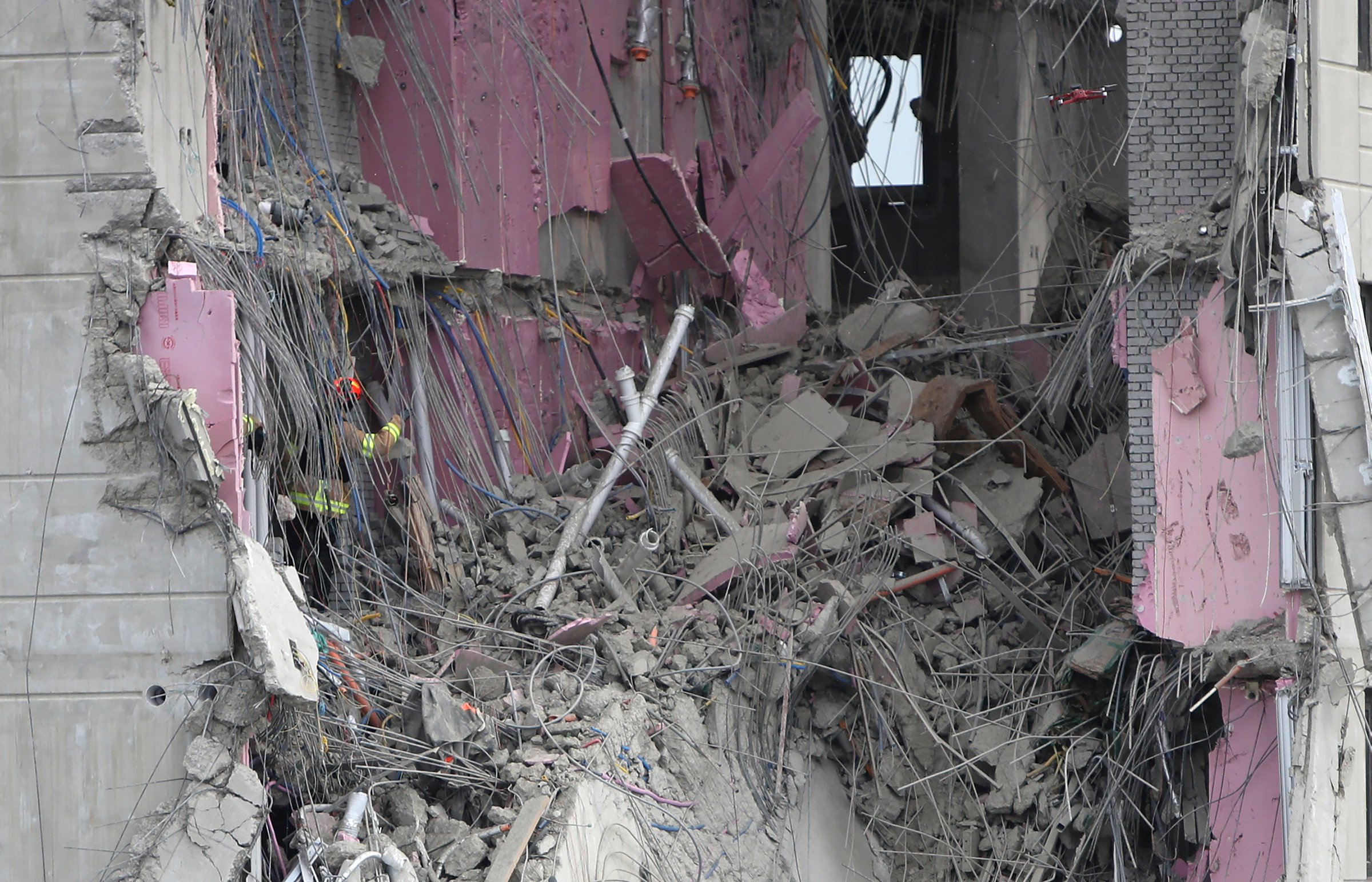 A rescuer searches through debris Thursday for people missing after a building collapsed in Gwangju, South Korea. More photos at arkansasonline.com/114gwangju/ (AP/Yonhap/Chung Hoe-sung)