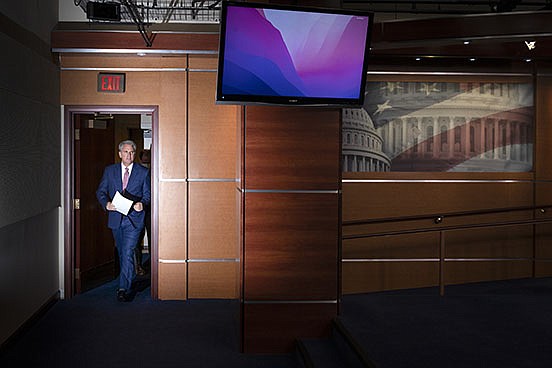 WASHINGTON -- The House select committee investigating the Jan. 6, 2021, Capitol attack subpoenaed four social media companies that have so far provided what the panel called "inadequate response" to requests for information and records relating to the spread of misinformation and efforts to overturn the 2020 election.

"We cannot allow our work to be delayed any longer," said the committee's chairman, Rep. Bennie Thompson, D-Miss., in a statement. "Two key questions for the Select Committee are how the spread of misinformation and violent extremism contributed to the violent attack on our democracy, and what steps -- if any -- social media companies took to prevent their platforms from being breeding grounds to radicalizing people to violence."

Thompson said that despite months of engagement "we still not have the documents and information necessary to answer those basic questions."

In a letter sent this week to Mark Zuckerberg, the CEO of Meta, Thompson cited reports that Facebook disbanded a Civic Integrity Team that was to focus on election misinformation "and reduced the application of tools used to restrain the spread of violent content. However, despite repeated and specific requests for documents related to these matters, the Select Committee still has not received these materials."

A letter to Alphabet asked for specific information regarding YouTube, a platform it described as providing "significant communications by its users that were relevant to the planning and execution of January 6th attack on the United States Capitol."

The letter noted that Stephen Bannon livestreamed his podcast on YouTube in the days before and after Jan. 6, 2021, and images of the Capitol insurrection were carried live on YouTube.

"The Select Committee believes Alphabet has significant undisclosed information that is critical to its investigation, concerning how Alphabet developed, implemented, and reviewed its content moderation, algorithmic promotion, demonetization, and other policies that may have affected the January 6, 2021 events," the letter said.

[Video not showing up above? Click here to watch » arkansasonline.com/114kmccarthy/]

Twitter was similarly reprimanded in a letter accompanying the subpoena. Thompson writes that "Twitter has failed to disclose critical information. ... For example, Twitter has not produced important documents relating to warnings it received regarding the use of the platform to plan or incite violence on January 6th."

Similar complaints were lodged in a letter to the CEO of Reddit, host of "r/The--Donald," which grew significantly on Reddit before migrating to a separate website in 2020. Thompson's letter said that site "ultimately hosted significant discussion and planning related to the January 6th attack" and he criticized the company for not responding to previously requested information.

House Minority Leader Kevin McCarthy, R-Calif., on Thursday continued to defy the committee, claiming Thursday there was no information he could provide the panel about what then-President Donald Trump did that day to stop the attack, although the two men spoke privately.

In a contentious news conference, McCarthy repeatedly evaded questions about whether he would defy a subpoena from the committee, and he accused the investigation of being "pure politics." The committee's leaders said Thursday that they are considering issuing a subpoena to McCarthy after he rejected a request to voluntarily provide information about his communications with Trump and then-White House Chief of Staff Mark Meadows during and after the attack.

The committee is specifically interested in a Jan. 11, 2021, conference call between McCarthy and House Republicans. The GOP leader reportedly said during the call that Trump, in previous one-on-one conversations, had admitted "some degree of responsibility" for the deadly storming of the Capitol by a mob of his supporters.

Around that time, the two reportedly discussed the consequences that the former president could face after the insurrection.

The panel is also interested in a call McCarthy had with Trump on Jan. 6 as the riot unfolded. On Thursday, McCarthy avoided questions about the Jan. 11, 2021, call.

Instead, McCarthy briefly referred to the separate call he held with Trump on Jan. 6, which he said he has publicly spoken about. He said he has no new information to give the committee about it.

"My conversation was very short, advising the president what was happening here," McCarthy said Thursday.

McCarthy reportedly held that tense call with Trump as the riot unfolded. During the call, Trump "initially repeated the falsehood that it was antifa that had breached the Capitol," according to Rep. Jaime Herrera Beutler, R-Wash., who said McCarthy told her about the call after it happened.

According to Herrera Beutler, after McCarthy told Trump it was his supporters storming the Capitol, Trump responded: "Well, Kevin, I guess these people are more upset about the election than you are."

McCarthy also doubled down Thursday on his belief that the Jan. 6 committee is leading a partisan investigation with the goal of damaging Republicans under the leadership of House Speaker Nancy Pelosi, D-Calif.

When asked about McCarthy's defiance of the Jan. 6 committee's requests, Pelosi said Thursday that McCarthy "has an obligation" to cooperate with the investigation. When asked if the committee is justified in using its subpoena powers against McCarthy, Pelosi deferred comment to the panel's leadership and said she "has no intention" of interfering with the committee's work.

"It is up to the committee as to what they do next," Pelosi said. "They know the path that they are on. I defer to their judgment."

She emphasized that the committee has said multiple times it will use all the tools at its disposal to investigate the attack, including its subpoena powers.

"I have confidence in the bipartisan nature of the committee," Pelosi added. "They are working very hard, as we can see in the public domain [and] the product of their work."

Thompson and the committee vice chair, Rep. Liz Cheney, R-Wyo., said they are considering issuing a subpoena not only to McCarthy but also other defiant Republican lawmakers such as Reps. Jim Jordan and Scott Perry -- an option that raises complex legal and practical issues already under discussion.

In a letter to McCarthy on Wednesday, Thompson cited the GOP leader's conversation with Trump on or about Jan. 11, 2021.

McCarthy "may also have discussed with President Trump the potential he would face a censure resolution, impeachment, or removal under the 25th Amendment," Thompson wrote. "It also appears that you may have identified other possible options, including President Trump's immediate resignation from office."

McCarthy, in response to Thompson on Wednesday, criticized the committee for wanting "to interview me about public statements that have been shared with the world, and private conversations not remotely related to the violence that unfolded at the Capitol. I have nothing else to add."

Information for this article was contributed by Tom Hamburger, Gerrit De Vynck, Mariana Alfaro and Amy B Wang of The Washington Post.