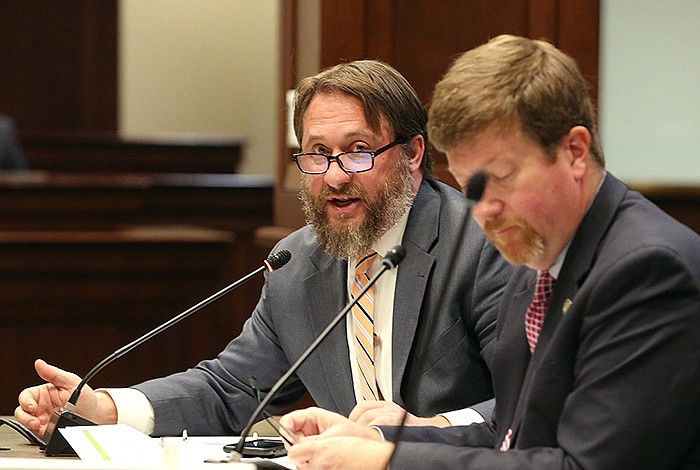 Gov. Asa Hutchinson on Tuesday proposed a $69.6 million increase in the general revenue budget for the public school fund, to $2.32 billion in fiscal 2023, which starts July 1. The fiscal legislative session starts Feb. 14.

The House and Senate Education Committees recommended an $86.7 million increase in fiscal 2023, their recommendation to provide an adequate education for public school students. In addition to funding from state general revenue, money for educational adequacy in the public schools comes from a 0.875% portion of the state's 6.5% sales tax and from the 25 mills of property tax raised by counties, according to the state Department of Education.

During the Arkansas Legislative Council and Joint Budget Committee's hearing on the department's proposed budget for fiscal 2023, state Sen. Kim Hammer, R-Benton, pressed Key to justify Hutchinson's recommendation to increase the spending authority for per student state foundation funding by $70.7 million to $2.2 billion.

"We are going to bump it up $70 million and I understand Lake View's involvement in adequacy and all," Hammer said.

He was referring to lawmakers' biennial review of public school funding under 2003 legislation passed in the aftermath of the Arkansas Supreme Court's Lake View School District vs. Huckabee decision, which found the state's education funding system was inadequate and unconstitutional.

"But we are going to pump $70 million more in and what are we going to get in return for it as far as, how is it going to move the needle for the state with the educational outcome?" Hammer asked.

Key said the House and Senate Education Committees recommended the increase in per student foundation funding as part of their educational adequacy process.

"I believe what we are doing with districts through our ... initiative with reading, you are talking about investments being made now that it is going to take a while to see the incremental impact on those measures that [Bureau of Legislative Research] staff showed during that [recent] education meeting," he said.

"But they're also [initiatives] that we know work," Key said.

"To say that we don't know we need to provide $70 million, that's where teacher salary increases come from, many of the districts, that's where operating expenses are dealt with, " he said. "I probably can't tell you the answer that this $70 million is going to move the needle by X amount. But I can tell you that the things that are in place trying to support the teachers, principals and the students out there, we believe will move the needle."

He said the state has been challenged by, among other things, covid-19 and virtual education in recent years and that has hindered the state from seeing the outcome from efforts such as the reading initiative.

Rep. Johnny Rye, R-Truman, queried Key about what Rye should tell a teacher who makes about $37,000 a year, about what to expect after the 2021 Legislature and Hutchinson enacted a law aimed at increasing the median teacher salary from $49,822 to $51,822 a year over a two-year period.

The law aims to reduce the gap between the highest and lowest salaries among school districts across the state and help districts that aren't at the median salary level to attain it, state officials have said.

"We will be in the second year of the effort to increase the average teacher salary across the state," Key said.

"Many of those districts where their average teacher salary is below a certain level ... somewhere around $51,000, $52,000 ... are eligible for the second year of funding," he said. "We will be adding districts to that. It is $25 million [the first year] and $26 million the second year. That will be part of what we will bring to you in the fiscal session.

"It will be a help, so you can tell them that help is coming."

The governor recommended a $498,150 increase to $13.9 million in spending authority for high-cost occurrences for special education students.

Hammer said some public school officials are concerned about having to absorb a lot of the costs of providing daily high-cost special education needs without sufficient financial support from the state.

He questioned whether the proposed increase in the governor's proposed budget is sufficient.

Key said the proposed increase reflects the recommendation of the House and Senate Education Committees in their adequacy recommendations.

State officials will have information about the "the real needs" to provide to the House and Senate Education Committees for the first time, after they worked to improve the process of funding the high-cost occurrences of special education students, he said.

This funding is provided to reimburse school districts that support special education students who have more severe disabilities and much greater needs, Key said.

"If there are any occurrences of districts not providing the needed services, we are going to hear about it from parents or advocates," Key said. "There are processes in place through our special education unit."

But Sen. Joyce Elliott, D-Little Rock, said she is worried about the presumption that there are advocates and parents who know how to do that.

"I just want us to find out who is checking to make sure things are happening as we assume they are," she said. "I don't want us to have a budgetary convenience because we are not digging a little bit deeper to find out what's going on. I just happen to know there are folks that just don't know how to be advocates."

Key said department officials understand that and he wants his special education team to speak to the House and Senate Education Committees about the changes and respond to questions.

"My team won't let me forget this issue," he said. "We want to get this before you all because we think we are on a better track than we were before."

The governor recommends a $2.9 million increase, to $35.7 million, in the spending authority for alternative learning environments. Those are programs that target at-risk students.

Key said the proposed increase is based the recommendations of the House and Senate Education Committees and on the growth in the number of students in alternative learning environments.

Sen. Linda Chesterfield, D-Little Rock, said she is concerned that alternative learning environments have become "a dumping ground" for certain students and questioned whether districts are being sufficiently monitored to make sure they are spending the funds properly.

"We need to take a holistic look at the [alternative learning environment] process, and how we are funding it, how we are identifying students, how we meet their needs."

Chesterfield asked Key about audits of the Professional Learning Communities program and the Succeed Scholarship program.

The Arkansas Professional Learning Communities program trains educators in collaboration as a way to improve teaching and student achievement.

The Succeed Scholarship program provides private school vouchers to students in foster care, students with disabilities and the children of active-duty or reserve members of the U.S. military.

Key said all of the department's programs are subject to audit by Arkansas Legislative Audit.

But Chesterfield said, "Even though the state is funding them, they are provided by outside sources and so I want to know that those entities are being audited specifically to find out if the monies that we are allocating to them are being spent as they should be."

Key said the state provides about $14 million to the Professional Learning Communities program. Hutchinson has proposed a $2 million increase in spending authority for the program in fiscal 2023.

Hutchinson has proposed providing $3.3 million in state general revenue for the Succeeds Scholarship program in fiscal 2023.

Key said the department has a process to match up on a regular basis the scholarships that are awarded through the Succeed Scholarship program "with those that are on our list of who should be getting it and we make sure we engage with the Reform Alliance and with the individual schools to make sure that the checks that are being written to the schools and the parent or caregiver, because it has to be both, that those are being spent appropriately and directed appropriately." 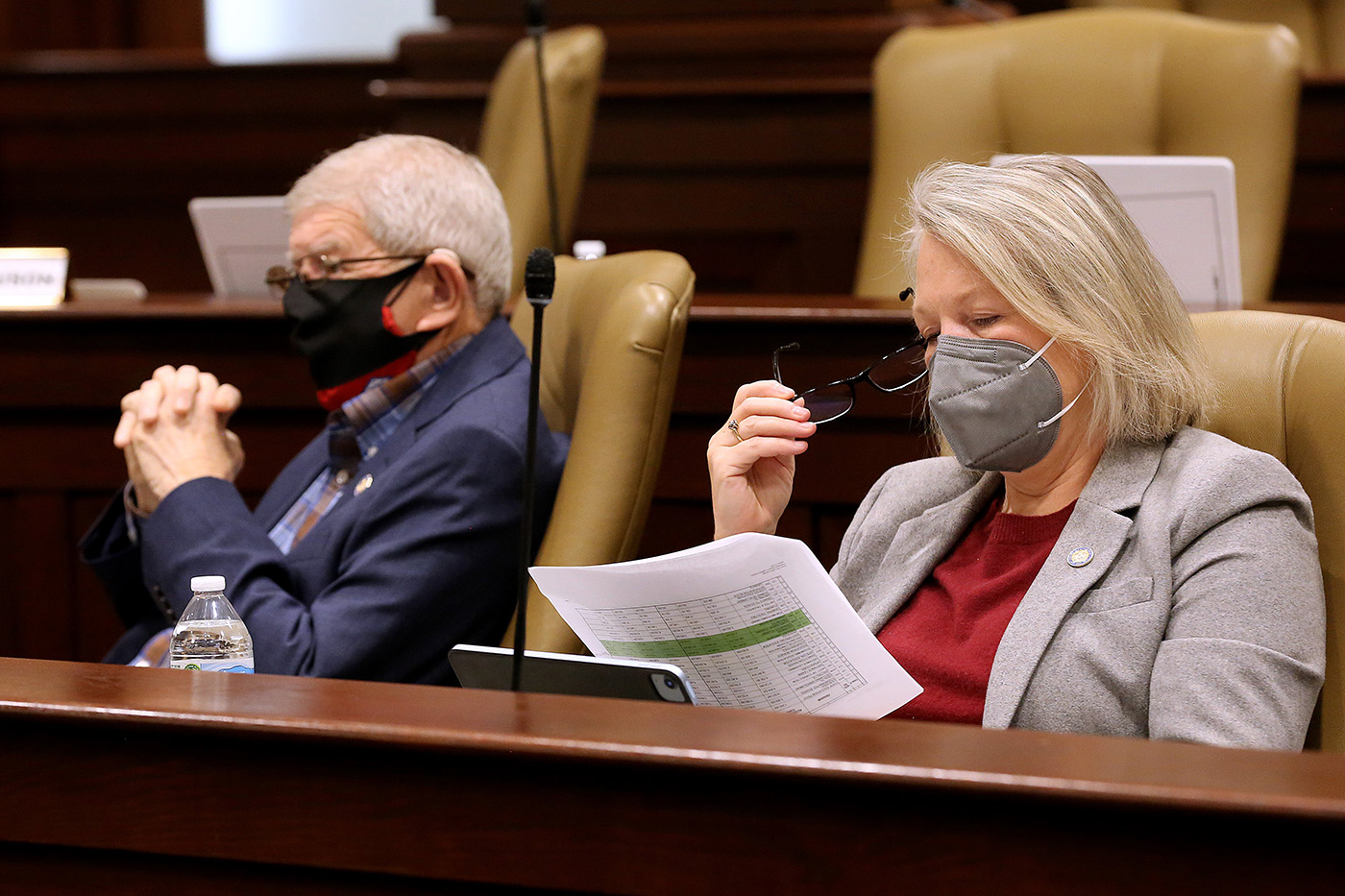