Bikes, Blues & BBQ events to be seen inside, outside Rogers 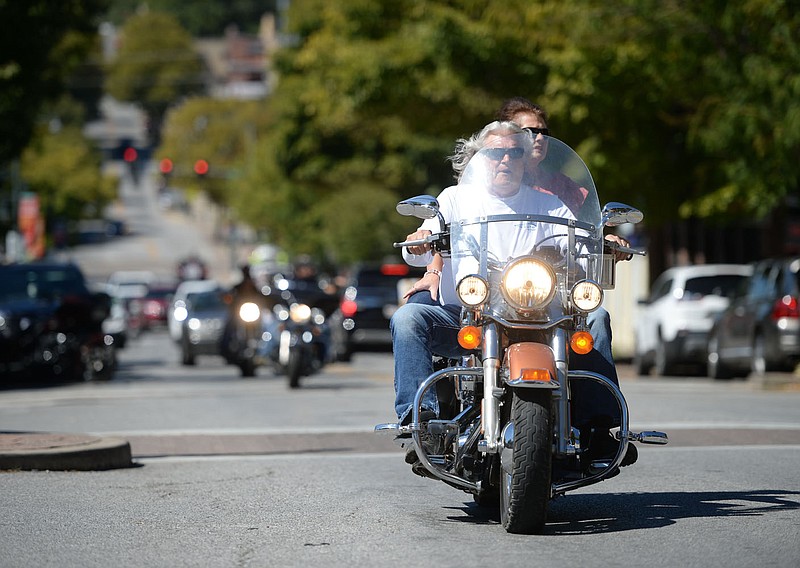 Riders make their way east Sept. 25 on Dickson Street in Fayetteville. The Bikes, Blues &amp; BBQ motorcycle rally was canceled last year after the University of Arkansas rescinded permits for the event planned at Baum-Walker Stadium. The event is planned to happen in Rogers this year. (File photo/NWA Democrat-Gazette/Andy Shupe)

ROGERS -- Space for "social distancing" is one of the perks Bikes, Blues & BBQ got when it moved to Rogers from Fayetteville, organizers said.

The venues for the Oct. 5-8 motorcycle rally will be enjoyed from the Benton County Fairgrounds to Eureka Springs, said Tommy Sisemore on Thursday. Sisemore is the executive director of the charity event.

Even Harrison businesses will welcome motorcycle enthusiasts this fall, he said.

Sisemore said negotiations with various venues are continuing. He expects an announcement of the confirmed sites and events in about two weeks.

Sisemore spoke Thursday at an informational meeting for Rogers city officials and tourism specialists at the Rogers-Lowell Chamber of Commerce building. Most attended the meeting via Zoom.

Raymond Burns, the chamber's president and chief executive officer, listed some of the more probable sites for events, including the Rogers Convention Center, the Arkansas Music Pavilion, downtown Rogers and areas along Hudson Road, where four motorcycle manufacturers sell all year.

The car show at Arvest Ballpark in Springdale will continue there, Sisemore said. And events that aren't officially part of the festival, but draw motorcycle enthusiasts, will continue in Eureka Springs.

For 20 years, Fayetteville served as host city for the event that grew from about 300 participants to around 300,000 in recent years. The rally grew to include official events at Baum-Walker Stadium, home of the University of Arkansas baseball team.

The rally was canceled in 2020 and 2021 in the face of the pandemic, and the baseball stadium wasn't available in 2022, leading organizers to move the event, Sisemore said.

"Downtown Fayetteville had become very compact, and they are infilling most open spaces," Sisemore said.

"In Rogers, we will have room to spread out. It also will give us the opportunity to grow."

Sisemore expects the future will see rally events spread between Rogers and Eureka Springs. He said organizers don't expect motorcycles to overpower the city's infrastructure, like they did in Fayetteville.

"We aren't asking for any road closures. We're not asking to limit traffic on any city streets to motorcycles only," he said.

Burns said the only concerns about the event he has heard focus on traffic congestion and noise.

"But that's every day in Rogers," he said with a chuckle.

Sisemore said he has received harsh comments for organizing an event in the midst of the pandemic, from folks predicting a "super spreader" event. He promised that city officials and event organizers would reassess the situation continually over the eight months before the scheduled event.

"We want to push the experience in Northwest Arkansas as a whole," Burns said of Bikes, Blues & BBQ. "We want to encourage them to shop locally.

An economic impact report of the rally performed in 2013 by the Walton College of Business at the University of Arkansas found the rally attracts about 200,000 people each year from outside Northwest Arkansas to the region. Visitors and local participants pour about $80 million a year into the local economy, Sisemore said.

The event has raised a total of about $3 million for local charities over the years, he said.

Print Headline: Motorcycle rally to spread out from Rogers