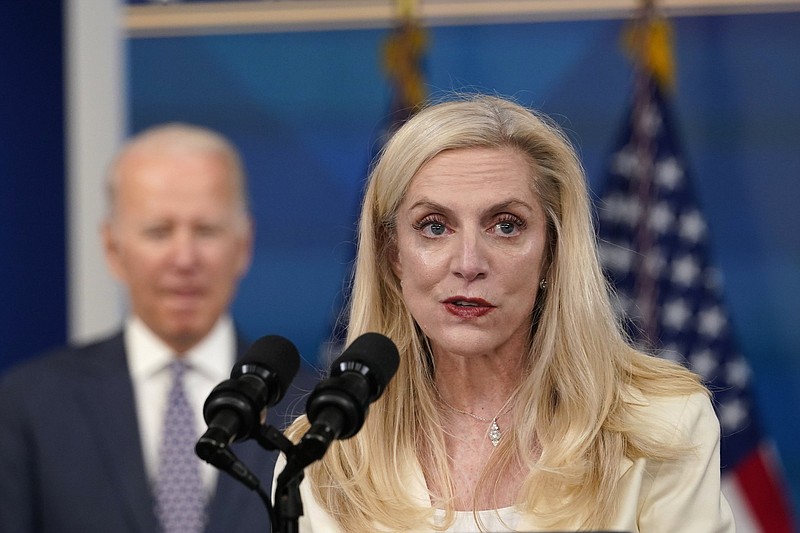 Lael Brainard speaks at the White House complex’s South Court Auditorium in November after being nominated for vice chairwoman of the Federal Reserve. (AP)

WASHINGTON -- Lael Brainard, President Joe Biden's nominee for the Federal Reserve's No. 2 spot, said Thursday that combating high inflation is the central bank's top priority and said she believed the Fed could reduce it without sacrificing economic growth.

Testifying at her confirmation hearing before the Senate Banking Committee, Brainard noted that inflation is "too high, and working people around the country are concerned about how far their paychecks will go."

"We are taking actions ... that I have confidence will be bringing inflation down, while continuing to allow the labor market to return to full strength over time," she said. Fighting inflation is "our most important task."

Brainard's elevation of inflation-fighting as the Fed's top goal is notable given that she is, for now, the lone Democrat on the Fed's board and has long been seen as inclined to keep interest rates low to boost employment, rather than to back higher rates to curb inflation pressures. Her stance Thursday reflects the abrupt pivot the Fed has recently made under Chairman Jerome Powell toward making inflation-fighting its top priority.

Biden nominated Brainard to be the Fed's vice chairwoman in late November, the same day he announced he would nominate Powell for another four-year term as Fed chairman. Biden is expected soon to nominate three more people to fill vacancies on the board.

Brainard encountered little hostile questioning or overt opposition at Thursday's hearing. Both Brainard and Powell are expected to win approval from the committee and final confirmation by the full Senate in the coming weeks.

[Video not showing up above? Click here to watch » arkansasonline.com/114brainard/]

On Wednesday, the government reported that inflation spiked to 7% in December from a year earlier, the sharpest such increase in four decades. The acceleration of consumer prices has thrust Fed policy into the spotlight. The central bank is tasked by Congress with keeping prices stable and fostering "maximum employment."

Several Republican senators expressed concern that the Fed might increasingly take account of climate change in its policymaking and use its supervisory authority over banks to discourage them from lending to oil and gas companies. Brainard pushed back against such a likelihood.

"We would not want to tell banks what sectors to lend to, or not to lend to," she said.

Sen. Steve Daines, a Republican from Montana, questioned whether the Fed has the "experience or expertise" to incorporate climate change into its regulation of banks. Last year, Brainard had suggested that the Fed should evaluate scenarios in which climate change could harm the financial system. An example would be widespread lending losses or insurance payouts resulting from weather disasters.

Sen. Patrick Toomey, R-Pa., has long criticized the Fed for its attention to climate change, saying that's outside the central bank's dual mandate of stable prices and full employment.

"Not only does the Fed lack expertise in environmental matters, but there is no reason to believe that global warming poses a systemic risk to the financial system," Toomey said Thursday.

Brainard said the Fed would never tell banks which businesses or industries they could lend to, or not. Rather, the focus is on helping banks measure, monitor and manage their own vulnerabilities, even if the chances of a sudden or devastating climate event are small.

"Tail risks are risks that have very, very low probability of happening but have extreme damage," Brainard said. She added that she wouldn't have expected the economy would be rocked by a global pandemic. Yet "a lot of our policymaking over the last two years has been under the cloud of a very complicated set of economic conditions."

In his testimony Tuesday, Powell pledged that the Fed would accelerate its planned interest rate increases, if needed, to curb high inflation. The Fed has held its benchmark short-term rate near zero since March 2020, when the pandemic plunged the economy into a deep recession.

Fed officials have predicted that they will raise rates three times this year, though many economists envision four increases. The rate increases, which, in turn, raise borrowing costs for many consumer and business loans, are intended to cool the economy, slow hiring and reduce inflation.

Powell's -- and Brainard's -- challenge this year is to strike the right balance between fighting inflation and supporting the economy. If the Fed raises rates too slowly, inflation may accelerate further and force it to take more draconian steps later to rein it in, potentially causing a recession. Yet if the Fed raise rates too quickly, it could trigger that recession earlier and perhaps unnecessarily.

In her time at the Fed, Brainard has amassed a broad portfolio. She became the leading voice for tighter oversight of Wall Street, regularly dissenting on policies that loosen regulations put in place after the recession. Brainard also led the modernization of the Community Reinvestment Act, which was crafted to encourage banks to lend in low-income neighborhoods.

Information for this article was contributed by Christopher Rugaber of The Associated Press and by Rachel Siegel of The Washington Post.