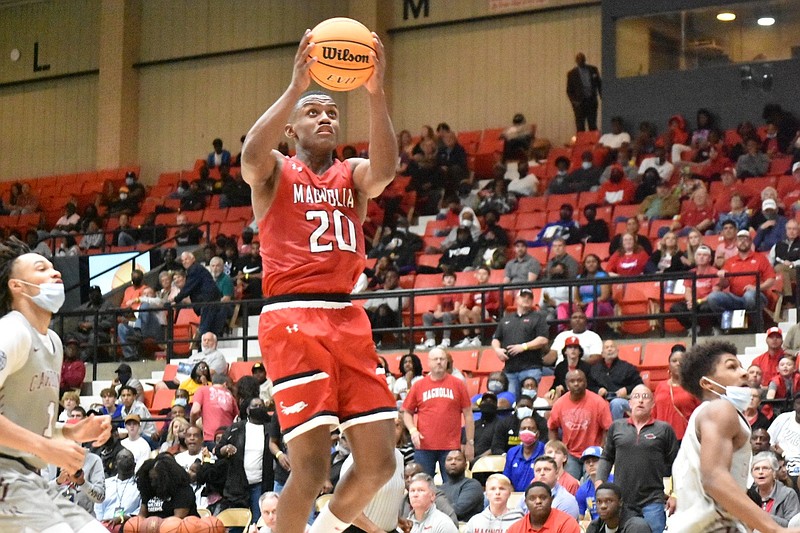 University of Arkansas signee Derrian Ford and No. 3 Magnolia host Star City today before playing its next two games on the road. (Pine Bluff Commercial/I.C. Murrell)

GREENE COUNTY TECH AT NO. 2 JONESBORO

NOTEWORTHY The first two conference games for Jonesboro have resulted in mercy-rule victories. ... Greene County Tech had dropped games to No. 9 Farmington and Nettleton before disposing of Batesville 65-41 on Tuesday. ... The Hurricane have taken four of the past five meetings with Greene County Tech, including all three last season.

STAR CITY AT NO. 3 MAGNOLIA

NOTEWORTHY Magnolia didn't break much of sweat in blasting Monticello 57-26 in its last game. ... Star City bounced back from a loss to Monticello last week by beating Warren 62-41 earlier in the week. ... Magnolia's next two games are both on the road, starting with Camden Fairview on Jan. 18.

NO. 4 MARION AT SEARCY

NOTEWORTHY Ryan Forrest turned in 37 points in Marion's previous game -- a 69-40 pasting of a Nettleton team that had won 10 of its previous 11 games. ... This is the second in a tough four-game stretch for Searcy, which lost at West Memphis on Tuesday. The Lions then play at Greene County Tech and at Jonesboro. ... The Patriots have won five games in a row.

NO. 6 SPRINGDALE HAR-BER AT BENTONVILLE WEST

NOTEWORTHY Har-Ber is looking to keep its run going after it got a last-second shot from Miles Rolfe to beat Springdale 43-41 in its previous game. The win was the Wildcats' 10th in their past 11 games. ... West had a quartet of players with at least 10 points in its victory over Rogers. ... The Wolverines took both battles during the 2020-21 season.

NO. 8 MAUMELLE AT SYLVAN HILLS

NOTEWORTHY This will be Maumelle's first conference game after it had it opener with Jacksonville canceled. ... Sylvan Hills is riding a wave of momentum after stunning Little Rock Christian in its first 5A-Central game. ... This is the 13th of 14 straight games away from home for Maumelle. The Hornets haven't played at their gymnasium since Nov. 20, which was a loss to No. 1 North Little Rock.

HUNTSVILLE AT NO. 9 FARMINGTON

NOTEWORTHY Gosvener took over as head coach in December after then-coach Grant Myrick was placed on leave. ... Farmington, ranked No. 2 in Class 4A, has given up an average of 39.8 points per game during its eight-game winning streak. ... Huntsville fell behind 16-6 in the first quarter of its previous game against Berryville and never recovered in losing 69-38.

ROGERS AT NO. 10 SPRINGDALE

NOTEWORTHY Two teams coming off losses, with Springdale losing a heartbreaker while Rogers was beaten by double digits. ... Springdale, which had won eight in a row before being beaten by Springdale Har-Ber, has Fayetteville, Bentonville and Bentonville West in its next three games. ... Rogers has scored less than 50 points 10 times this season.

No. 1 North Little Rock and No. 7 Bentonville had their games canceled.

HUNTSVILLE AT NO. 4 FARMINGTON

NOTEWORTHY Farmington has scores at least 51 points in every game this season, while Huntsville has eclipsed the 50-point mark just three times in its past 10 games. ... The Lady Eagles have won their past three contests. ... The Lady Cardinals won't have to leave home in three of their next four games.

NO. 5 MELBOURNE AT CEDAR RIDGE

NOTEWORTHY Melbourne, the top-ranked team in Class 2A, hasn't lost a conference game since Jan. 16, 2019, when former league foe Marmaduke won 63-53. ... Cedar Ridge lost an earlier meeting against the Lady Bearkatz 61-36 on Dec. 3. ... A four-game road trip awaits the Lady Timberwolves after today.

NO. 6 SPRINGDALE HAR-BER AT BENTONVILLE WEST

CABOT AT NO. 7 LITTLE ROCK CENTRAL

NOTEWORTHY Central had a tough time with Bryant but still came away with a 55-50 win to even its conference record. ... Cabot fell into an 11-point deficit after one quarter at No. 1 Conway on Tuesday before eventually losing 71-41. ... Central swept the season series last season.

NOTEWORTHY This is the second of at least three encounters this season. ... Vilonia beat Greenwood 45-38 during the Beebe Badger Holiday Classic on Dec. 30. The teams will play again on Feb. 11. ... The Lady Eagles haven't lost since Sylvan Hills beat them 50-45 on Dec. 9.

NOTEWORTHY Marion kept its winning streak intact when it got a basket from Jessica Robins with less than two seconds left to beat Nettleton three nights ago. The Lady Patriots have won six straight games. ... Searcy, on the other hand, has dropped nine consecutive games. The Lady Lions last won a game on Nov. 30 when they knocked off Little Rock Hall 43-20. ... Searcy won't play at home again until Jan. 25.

No. 1 Conway, No. 2 North Little Rock and No. 3 Fort Smith Northside had their games canceled.