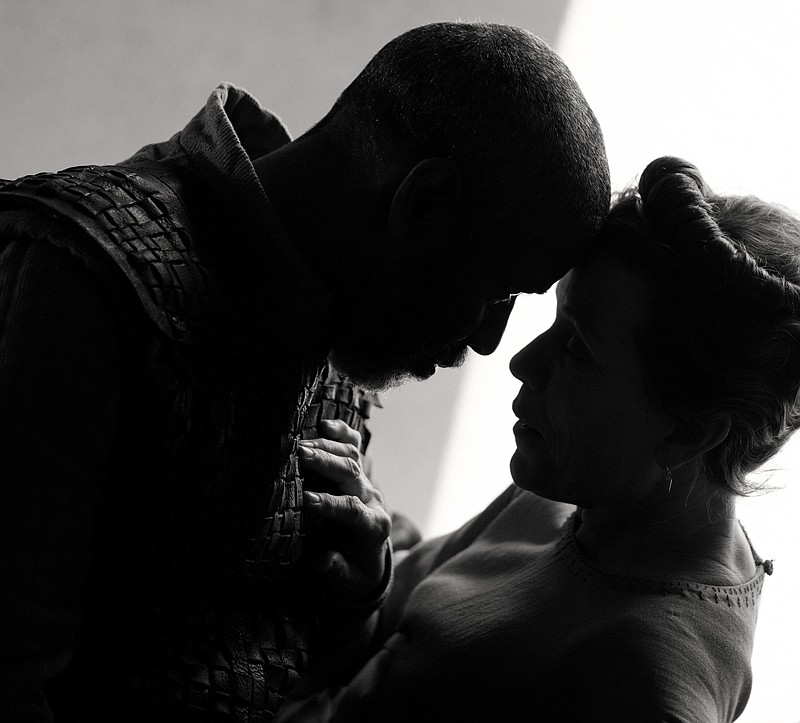 Macbeth (Denzel Washington), Thane of Glamis and Cawdor, a general in the King’s army, consults with Lady Macbeth (Frances McDormand) in “The Tragedy of Macbeth,” Joel Coen’s black-and-white re-telling of the Shakespeare play.

I hate making these lists almost as much as I enjoy watching these films. Every year without fail, some wonderful film comes my way after my deadline for the list has passed. Nonetheless, it is both my duty and my pleasure to share which films I enjoyed this most from the previous year.

1. "The Tragedy of Macbeth" -- Joel Coen, in his first movie without his brother, Ethan, makes Shakespeare's oft-told tale of treachery his own with his eerie, dream-like approach that combines shifting, surreal environments with the Bard's text. Denzel Washington and Frances McDormand are terrific as the royal couple whose craving for advancement ultimately dooms them. The film is coming to Apple+ soon, but Bruno Delbonnel's photography and Stefan Dechant's sets belong on the big screen. The same could be said for the dense soundtrack and Carter Burwell's haunting score.

2. "The Power of the Dog" -- Jane Campion's adaptation of the Thomas Savage novel is engrossing because it features a character whose destructive behavior may or may not be redeemable. Benedict Cumberbatch may not be the first person one might pick to play a Montana cowboy, but he's got the predatory intelligence and just enough of a soul to make his hard riding and mean-spirited Phil interesting. He's also got a deep cast of supporting players with Jesse Plemons as Phil's long-suffering brother, and his real-life paramour Kirsten Dunst is equally good as a woman who doesn't seem to belong in what's left of the wild west.

3. "Drive My Car" -- Yes, it's three hours long, but this story of dealing with grief and guilt needs every second to capture the complex emotions involved. Director Ryusuke Hamaguchi deftly incorporates Samuel Becket and Anton Chekhov into Haruki Murakami's short story. Each of the characters is carrying some type of burden, but Hamguchi makes each of their struggles uniquely involving.

4. "The Card Counter" -- Paul Schrader, who wrote "Taxi Driver," is making some of his best movies nearly five decades into his career. Anchored by a mesmerizing turn from Oscar Isaac, "The Card Counter" follows a man who tries with all his might to keep the rest of the human race and his own sense of guilt away and for better or worse is destined to fail. As a director, Schrader finds creative ways to make the mechanics of card games both understandable and engrossing, and his ear for dialogue is still surgically sharp.

5. "Summer of Soul (...Or, When the Revolution Could Not Be Televised)" -- Questlove's assembly of a series of free concerts held in Harlem in 1969 is history wrapped in breathtaking music. Not only do we get to see performances that haven't been broadcast or presented since they were shot, but we get to learn what was happening in the culture to give us unforgettable performances by B.B. King, Sly and the Family Stone, Stevie Wonder and others. I got to see this on my home equipment with my ears stuffed in headphones and in a theater. It's unfair that this footage was neglected for so long, but having it back is as exhilarating as the gospel tunes themselves.

6. "Flee" -- Much of the charm of this movie is that it's impossible to classify. What can you say about a Danish cartoon documentary about an Afghani refugee who has to flee both the Soviet occupation and the persecution that will occur if some of his fellow exiles find out he's gay? Regardless of the language or the medium, the story is both tense and moving.

7. "The Mitchells vs. The Machines" -- Some of the year's sharpest writing and satire came in a movie aimed at kids. As a nerdy family struggles to save the rest of their species from an operating system and robots that have dominated the globe, relentless laughs ensue. I was already in love with this film when Maya Rudolph, as the voice of the mother, mused, "Who would have thought a tech company wouldn't have our best interests at heart?" Oh, and any movie that casts Olivia Colman as the voice of an uber-computer bent on human annihilation is an unqualified masterpiece.

8. "West Side Story" -- Director Steven Spielberg and playwright Tony Kushner prove that there is still plenty of life left in a 65-year-old musical. The songs by Stephen Sondheim and Leonard Bernstein are still catchy and powerful, and Kushner ably gives the characters more depth than they previously had on stage or film. Spielberg also shrewdly brings back Rita Moreno in a sizable role and makes his first musical as if he had never been distracted by special effects or aliens or "Always."

9. "The Last Duel" -- Ridley Scott is cribbing from Akira Kurosawa here. Then again, so is Coen or any decent filmmaker. Perhaps the Japanese master is blessing both filmmakers with this look at two former friends who fight to the death when a knight (Matt Damon) accuses the other (Adam Driver) of raping his wife (the terrific Jodie Comer). Damon, Ben Affleck and Nicole Holofcener ("Enough Said") handle the multiple points of view with subtlety, and Scott stages the climactic battle with gusto and grit. The film follows the outline of the real 14th-century incident closely but delivers a tale that never feels like a moldy time capsule.

10. "Moffie" -- Boot camp can be scary for anyone, but it's especially harrowing in '80s South Africa. Director Oliver Hermanus immerses the viewing into the life of a draftee named Nicholas (Kai Luke Brummer), who already feels like an outsider because of his British heritage. If his peers discover he's gay, he could be in far greater danger. The Apartheid era surroundings owe more than a little to the Nazis, and the film is a chilly reminder of how toxic prejudice can be.