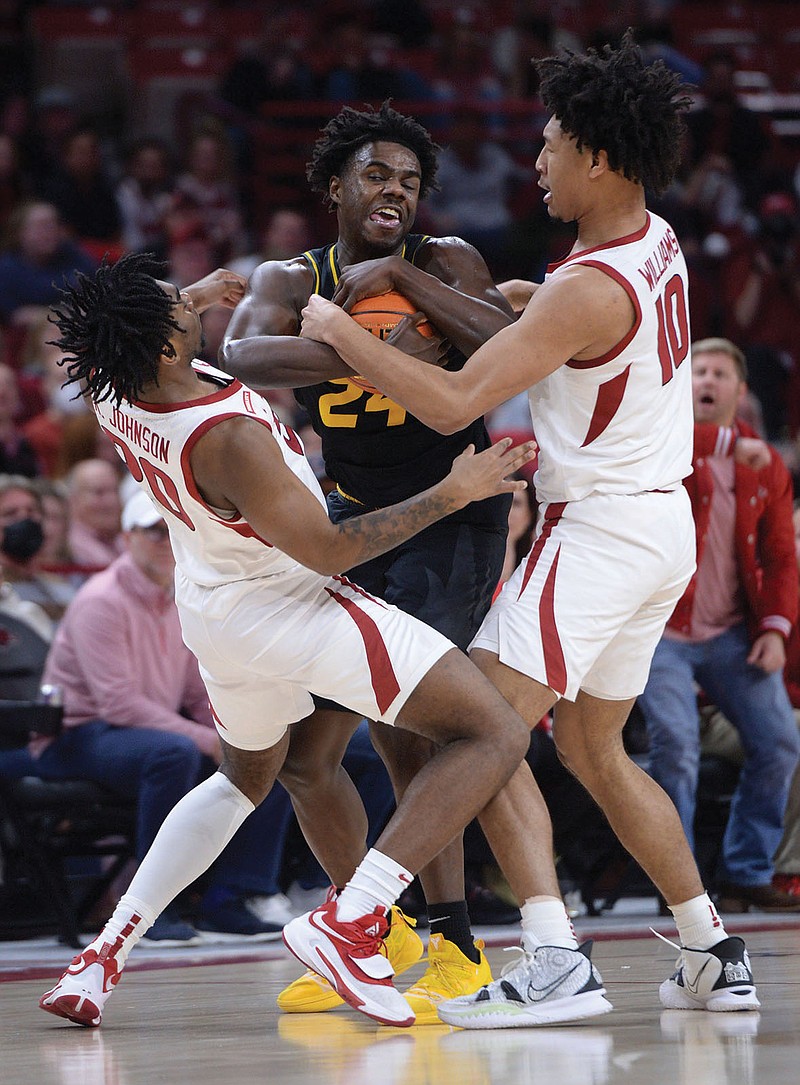 Arkansas had lost five of six games and started 0-3 in the SEC for the first time since 2009.

Saying the lineup change worked well for the Razorbacks would be a massive understatement.

"We went obviously with a way bigger lineup and a way more physical lineup," Musselman said. "How we came about it was kind of me sitting at home and thinking about what my dad would do in a situation like we were in."

The late Bill Musselman was a long-time pro and college coach.

"Big and physical is what I was used to growing up," Eric Musselman said.

Wade made his third start this season, but first at the small forward spot with Johnson at power forward and Williams at the post spot.

"But I thought Trey and Kamani deserved to start, and obviously Jaylin Williams has been so good for us all year and JD," Musselman said. "We basically slid everybody down a position instead of downsizing. Au'Diese has been playing the [small or power forward spots] and he started at the two guard for us.

"I thought defensively it gave us an identity, as well as rebounding the basketball."

Notae is the SEC's leading scorer, and Williams and Toney have started most of the season.

Johnson, who was suspended for the Mississippi State game, made his first start after playing 72 minutes in nine games.

Wade had played a combined nine minutes in the previous two games.

The starting five combined to average 47.3 points per game going into Wednesday's game -- including Johnson at 3.4 and Wade at 1.9 -- but the Razorbacks attacked the rim and scored well in transition after Missouri turnovers and on second-chance points.

"The biggest thing I tried to tell that lineup is we were going to execute," said Wade, who had a season-high 17 points, 5 rebounds, 3 assists and 3 steals. "We're going to play hard. We're going to be physical, and we're going to follow Coach's game plan.

"Just trying to play together. That was the biggest thing."

Notae led the Razorbacks with 19 points, but he got his teammates involved with assists on baskets by Williams and Johnson on the first two possessions.

"I like our lineup," said Williams, who had 13 points and 10 rebounds. "It was a big lineup, energy lineup, guys that are going to play hard.

"We started off the game with a lot of energy and the energy just kept on rolling throughout the game."

Arkansas assistant coach Keith Smart, who will be interim head coach when the Razorbacks play No. 12 LSU on Saturday with Musselman recovering from shoulder surgery, said he hopes to start the same lineup against the No. 12 Tigers.

But that depends on how Johnson is feeling after he sustained an ankle injury against Missouri and didn't play in the second half.

"Kamani is still being evaluated," Smart said. "We'll know as we move forward. Obviously he's got to travel, and you've got to see how he responds to traveling with his ankle.

"But our training staff is doing an incredible job to get him up and hopefully we have a chance for him to play in this game."

WHEN 1 p.m. Central on Saturday