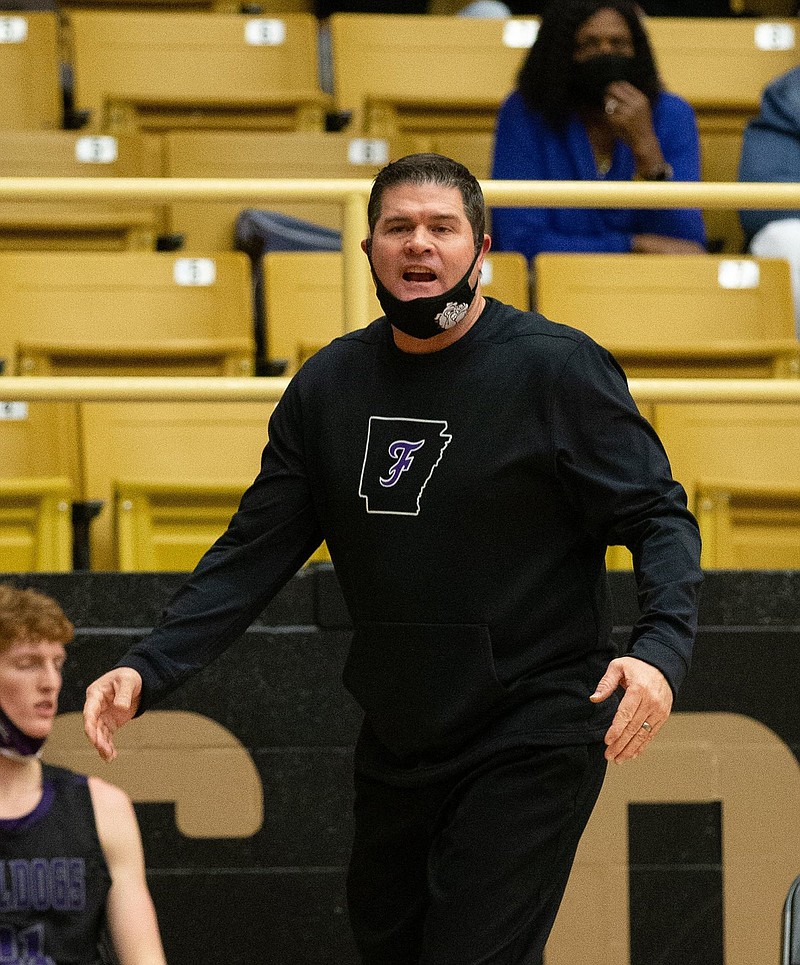 Fayetteville coach Brad Stamps had to inform his players of something that’s become all too familiar in the Covid era — that tonight’s anticipated matchup with Bentonville is postponed.

The game has been rescheduled for Wednesday, Jan. 26, 12 days after the teams were supposed to meet at Bulldog Arena tonight.

“It’s never easy, especially when we were really looking forward to this particular game,” Stamps said. “We had the momentum and playing really well.”

The Fayetteville vs. Bentonville games on both the boys and girls side have had conference championship implications in recent years. The Fayetteville boys (11-4, 3-0) would’ve entered tonight’s 6A-West showdown on a six-game winning streak after the Bulldogs won 75-37 at Fort Smith Southside. Fayetteville is tied for the early league lead with Springdale Har-Ber (13-2, 3-0), which defeated Springdale High 43-41 Tuesday night.

Fayetteville is led by Landon Glasper, an all-state guard who is averaging about 18 points as a senior. The Bulldogs have received a huge lift from 6-foot-5 sophomore Ornette Gains, who scored 26 points in Fayetteville’s 57-46 win at Bentonville West to begin conference play. Gains’ production provides Fayetteville with another one-two scoring punch the Bulldogs used with great success last season with Glasper and C.J. Williams.

“(Gains) is a big guy with a good feel for the game,” Stamps said. “Our expectations for him are really high as a scorer and rebounder who can also step out and hit the 3-pointer.”

Berryville stretched its winning streak to eight consecutive with Tuesday’s 69-38 victory at Huntsville.

The Bobcats are led by 6-foot-8 Weston Teague, an all-state center who scored 24 points against the Eagles. D.J. Colbert added 13 for the Bobcats (15-4, 2-1), who outscored Huntsville 26-8 in the third quarter.

“We’ve slowly but surely created some chemistry to where you’ve got to guard all five players,” Berryville coach Brent Compton said of his starting unit. “We played really well against Huntsville. I’m proud of our kids.”

Compton credits much of Berryville’s cohesiveness to the return of Cade Davidson, a 5-foot-9 senior point guard who missed most of last season after he suffered a broken leg in an early non-conference win over Rogers Heritage. Davidson is back to near 100 percent recovered and he contributed five points and nine assists in the win over Huntsville.

“He’s the difference in how well we’re playing,” Compton said. “He only scored five points against Huntsville but you don’t have to score a lot when you’re dishing out nine assists.”

Berryville’s eight-winning streak provides the Bobcats with plenty of momentum heading into tonight’s 4A-1 Conference game with Harrison (9-1, 2-1), which is tied for second place in the overall league standings.

Stephanie Jeffrey is no stranger to leading a basketball team. She’s got experience as a coach that stretches back several years. But Tuesday night she hit a coaching milestone, winning her first game as a varsity head coach.

Jeffrey, an assistant coach at Rogers Heritage, found out early Tuesday morning that coach Josh Laymon would not be able to coach his team that night at Bentonville. Twelve hours later, Jeffrey coached the Lady War Eagles to a 64-53 win.

“This feels good, it feels great,” said Jeffrey after the game. “The girls played hard, we did not lose any of the intensity with the coaching change. I think they did a great job adjusting.”

Heritage (11-5, 2-1 6A-West) dominated the second half and took control with a big fourth quarter.

Laymon is expected to be back on the Heritage sideline today when the Lady War Eagles host Fort Smith Southside.

Prior to becoming an assistant coach at Heritage three seasons ago, she coach the Heritage ninth grade team and also coached at Rogers Oakdale Junior High.

The Siloam Springs Lady Panthers are pleased with a 2-0 start in 5A-West Conference play, especially with both wins coming on the road.

“It’s big to start conference play 2-0, especially getting both wins on the road,” said Siloam Springs coach Tim Rippy said. “We have some big game coming up that we will hopefully have a full roster and be healthy to compete in down the line.”

The Lady Panthers’ home game against Greenbrier was postponed to Feb. 1 due to covid-19 concerns.

Siloam Springs gutted out the win at Mountain Home, despite being without point guard Mimo Jacklik. Brooke Smith ran the point in her absence.

Jacklik returned Tuesday at Alma and hit five 3-pointers for all 15 of her points. Brooke Ross added 18 points and 10 rebounds, while Reina Tiefel scored 10 and Smith had 10 rebounds and eight assists.

Siloam Springs is scheduled to play at Greenwood on Tuesday.