President orders 500 million more covid tests to give away 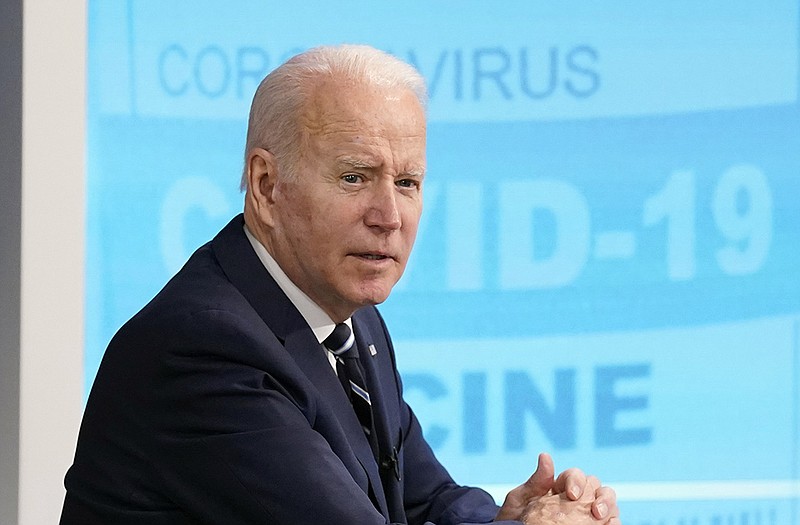 WASHINGTON -- President Joe Biden announced Thursday he was directing his staff to purchase an additional 500 million tests for distribution to Americans, doubling the government's previous purchase as his administration scrambles to respond to the highly contagious omicron variant.

Both vaccinated and unvaccinated people test positive for the virus, but Biden noted medical figures showing that people are far less likely to suffer serious illness and death if they've received a shot: "What happens after that could not be more different."

Biden acknowledged that, "I know we're all frustrated as we enter this new year" as virus cases reach new heights. But he insisted that it remains "a pandemic of the unvaccinated."

His comments come as his administration's focus is shifting to easing disruptions from the spike in cases that is also contributing to grocery shortages and flight cancellations, rather than preventing the transmission of the virus.

On Tuesday, Janet Woodcock, the acting head of the Food and Drug Administration, told Congress that the highly transmissible strain will infect "most people" and that the focus should turn to ensuring critical services can continue uninterrupted.

"I think it's hard to process what's actually happening right now, which is: Most people are going to get covid, all right?" she said. "What we need to do is make sure the hospitals can still function -- transportation, other essential services are not disrupted while this happens."

The initial batch of test kits will be available starting next week, Biden said, when the administration launches a new website where Americans can request the free tests. The rest of the tests will be delivered over the coming months.

Biden also announced that for the first time his administration was planning to make "high-quality masks," including N95s, which are most effective at preventing transmission of the virus, available for free. He said his administration would announce details next week.

[Video not showing up above? Click here to watch » arkansasonline.com/114freemasks/]

The federal government has a stockpile of more than 750 million N95 masks, the White House said this week. And though research has shown those masks to be better protection, they are often more uncomfortable, and health officials are not altering their guidance to recommend against less-protective cloth masks.

The best mask "is the one that you will wear and the one you can keep on all day long, that you can tolerate in public indoor settings," Dr. Rochelle Walensky, director of the Centers for Disease Control and Prevention, said Wednesday.

Biden encouraged Americans to wear masks when indoors to slow the spread of the virus, even as he acknowledged they're a "pain in the neck."

"Next week we'll announce how we're making high-quality masks available to the American people for free," he added.

Each of those states has suffered an astronomical rise in known cases, already exceeding the previous nationwide peak per capita reached last winter, according to a New York Times database. As of Wednesday, Rhode Island has almost hit 700% of last winter's peak, while per capita cases in New York and New Jersey were four to five times as high as last year's nationwide peak.

[Video not showing up above? Click here to watch » arkansasonline.com/114evers/]

As research has emerged that omicron causes less severe disease and vaccines remain protective against the worst outcomes for the vast majority of people, many public health experts have encouraged less focus on case rates and more emphasis on hospitalizations amid record-breaking national spikes.

Still, experts worry that the sheer number of cases will burden health care systems already strained by previous surges and grappling with staffing shortages. Even though at least some hospitalized people test positive for the virus incidentally after being admitted for conditions other than covid-19, experts say incidental infections can still pose significant health risks.

Hospitalizations per capita in five of the six states have already surpassed last winter's peak; New Mexico is the exception, at 73% of that high point. And with deaths, Michigan, New Mexico and Ohio have climbed higher than the peak in recent days, while New Jersey and New York are inching closer to that level.

The deployments are part of the Biden administration's efforts to tackle the latest surge of omicron cases, which have reached more than 780,000 a day across the country. The number of Americans hospitalized with covid-19 has hit a record high of about 142,000.

TROOPS ON THE GROUND

The White House said it spoke with federal personnel who are already on the ground in Arizona, Michigan and New York to hear about their experiences.

As of Thursday, there are now 15,200 Guard members around the country supporting covid-19 missions, said Gen. Dan Hokanson, chief of the National Guard Bureau.

State Guard leaders from Ohio, New York and Colorado told reporters Thursday they are using only vaccinated troops for missions that directly interact with the public, including at testing sites and in patient care at hospitals.

"They're not overlapping. They're complementary," he told reporters Thursday.

The first team of medical personnel arrived Sunday and went through an orientation before helping patients on Monday. They are providing care for up to 24 beds and supporting staff at Henry Ford Wyandotte with in-patient care and surgeries, Riney said.

The first phase is through Jan. 21 and the second team will come for an additional 30 days.

"We are looking at 45 days of total support and that has a much more meaningful impact," he said.

"We welcome and are grateful for any support that we have," said Riney, who told reporters that the federal government chose to address needs at the Wyandotte hospital after the health system submitted its current situation and data to Health and Human Services.

A spokesperson for the Cleveland Clinic said the hospital system is "receiving federal support from a team of approximately 20 military medical professionals."

Spokesperson Andrea Pacetti said they likely will begin working next week at the Clinic's main campus in Cleveland.

CEO and President Dr. Tom Mihaljevic in a statement on Thursday said: "We are grateful for the federal support as we continue to face a challenging covid-19 surge in our Ohio hospitals. The addition of military medical personnel allows us to care for more patients in our community."

Since Thanksgiving, when omicron was first discovered in South Africa, the administration has sent more than 800 military and emergency personnel to 24 states, tribes and territories, officials said, not counting the personnel Biden announced Thursday.

In addition, more than 14,000 National Guard members have been activated in 49 states to help at hospitals with vaccinations, testing and other medical services, officials said. Those deployments have been paid for by the American Rescue Plan, a law that Biden championed at the beginning of his term.

Officials said there would likely be further deployments of military medical personnel in the days ahead as the country continues to struggle with the pandemic.

Information for this article was contributed by Zeke Miller, Alexandra Jaffe, Lolita C. Baldor, Corey Williams and Mark Gillispie of The Associated Press and by Michael D. Shear of The New York Times. 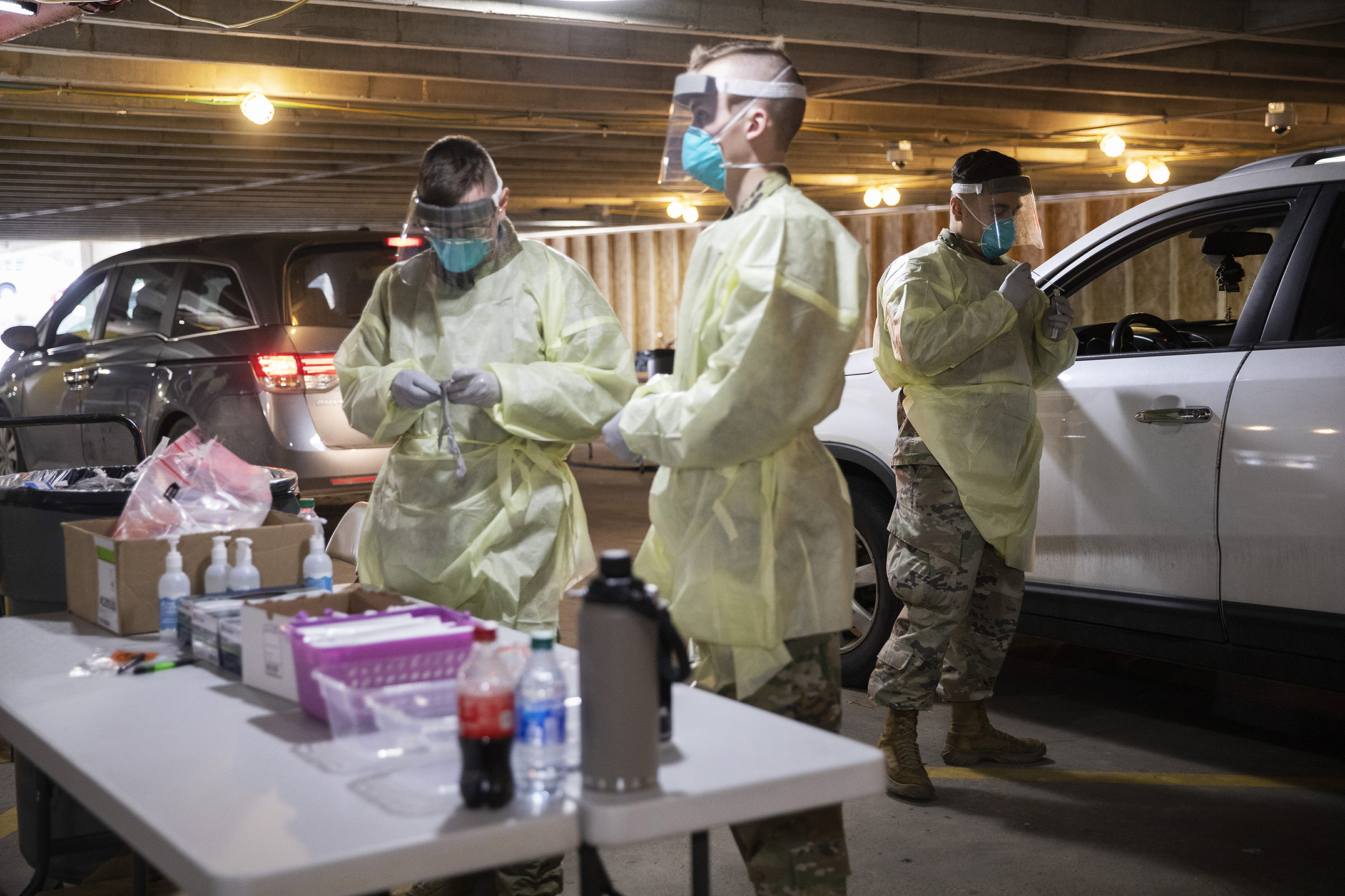