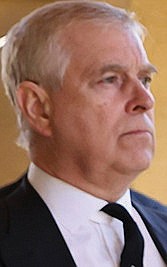 Prince Andrew is shown in this 2021 file photo. (Chris Jackson/Pool via AP)

LONDON -- Buckingham Palace announced Thursday that "with the Queen's approval and agreement," all of Prince Andrew's military affiliations and remaining royal patronages have been returned.

Andrew, Queen Elizabeth II's second son, faces a U.S. civil lawsuit that accuses him of sexually assaulting a teenager trafficked by financier Jeffrey Epstein. He denies the lawsuit allegations and has shied from the public eye for the past year.

The two-sentence statement from the palace ended, "The Duke of York will continue not to undertake any public duties and is defending this case as a private citizen."

Andrew will stop using the honorific title "His Royal Highness," though he remains a duke and a prince. His many patronages will be distributed among other members of the House of Windsor.

Where the money will come from for Andrew to defend himself -- or settle out of court -- is a hot topic in Britain.

He has been receiving a $27,000 annual pension from his navy service and a $342,000 annual allowance for his service as a senior working royal, according to figures widely reported by British media. Those funds may no longer be available.

[Video not showing up above? Click here to watch » arkansasonline.com/114andrew/]

Nick Goldstone, a legal commentator and head of dispute resolution at Ince law firm in London, said the stripping of titles and honorifics means "it would appear that the royal family are trying to distance themselves from the fallout from the Virginia Giuffre case and the toxicity of the allegations made against the Duke of York."

A judge in New York ruled Wednesday that the lawsuit filed against Andrew by Giuffre can go forward, for now.

Andrew's defense team had argued that a 2009 agreement Giuffre signed as she settled with Epstein for $500,000 shielded the prince and anyone else she might sue in connection with her claims against Epstein, who died by suicide while awaiting trial for sex trafficking in 2019.

But U.S. District Judge Lewis Kaplan determined that the settlement does not unequivocally free the royal from liability.

Information for this article was contributed by Shayna Jacobs of The Washington Post.