QB Hornsby rejoins with Razorbacks after week in transfer portal 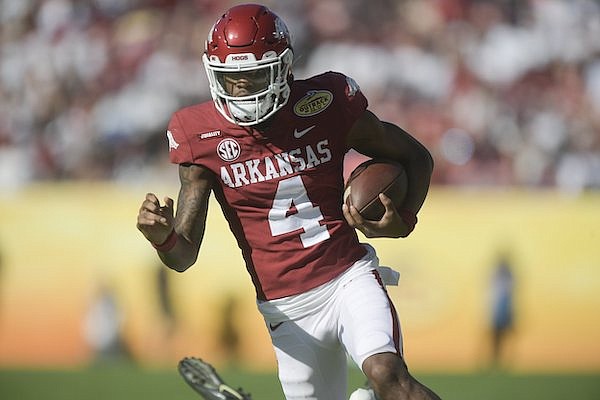 Arkansas quarterback Malik Hornsby carries the ball during the Razorbacks' 24-10 victory over Penn State in the Outback Bowl on Saturday, Jan. 1, 2022, in Tampa, Fla.

Hornsby entered the portal on Jan. 7. He played in six games in 2021 and has up to three years of eligibility remaining.

Hornsby is the second Arkansas player to withdraw his name after a brief time seeking a transfer. Offensive lineman Jalen St. John opted to return one day after entering his name in the portal.

Hornsby completed 5 of 12 passes for 46 yards and rushed 28 times for 203 yards and 1 touchdown in limited action behind starting quarterback KJ Jefferson as a redshirt freshman. His most important playing time came during the second half of the Razorbacks’ 20-10 victory over Texas A&M on Sept. 25 when Jefferson was in and out of the game with a knee injury.

Hornsby rushed four times for 67 yards during Arkansas’ 24-10 victory over Penn State in the Outback Bowl on New Year’s Day. Hornsby also lined up as a receiver during the game but was not targeted with any passes.

With Hornsby’s return, Arkansas will have at least three scholarship quarterbacks on campus for spring practice. Jefferson and redshirt freshman Lucas Coley are also on the roster.

Redshirt freshman Landon Rogers signed with the Razorbacks as a quarterback and changed positions to tight end last summer. Arkansas coach Sam Pittman left open the possibility that Rogers might return to quarterback during bowl practices.