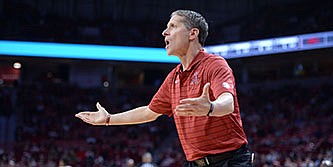 Arkansas coach Eric Musselman directs his players Tuesday, Jan. 4, 2022, during the first half of play against Vanderbilt in Bud Walton Arena in Fayetteville. (NWA Democrat-Gazette/Andy Shupe)

FAYETTEVILLE -- The University of Arkansas basketball team will travel to Baton Rouge today for Saturday's game at LSU without Coach Eric Musselman.

Musselman will stay at home recovering from surgery he underwent Thursday on his left shoulder to repair a torn rotator cuff.

The plan had been for Musselman to put off the surgery until after the season so he wouldn't miss any practices or games. But that plan changed when the pain in his shoulder became worse, not better, in recent weeks.

"You knew it was wearing on him because when you can't sleep, that's when it becomes a problem," said Arkansas assistant Keith Smart, who will be the interim head coach in Musselman's absence. "And I think Coach was fighting through it as much as he could.

"He competes at everything. But this was one competition that he just couldn't win, and he made a decision to get himself back on the road to a speedy recovery."

Musselman is expected to miss at least two games, including LSU and next Tuesday night's home matchup against South Carolina.

Smart said Musselman told him Tuesday that he would have the surgery and Smart would replace him.

When Musselman told the players in the locker room Wednesday night after the Razorbacks' 87-43 victory over Missouri about his surgery, sophomore forward Jaylin Williams said it wasn't a surprise.

"We kind of all knew something was up with his shoulder when he was walking around practice with a heating pad or ice pack on his shoulder while just coaching with one arm down and one arm up pointing," Williams said. "I think we're going to continue to do what we've been taught, what we've learned throughout the months that we've been here."

Smart, 57 and a Baton Rouge native, is in his first season coaching college basketball, but he previously coached at the pro level for 22 seasons, including 19 in the NBA. He had head coaching stints with the Cleveland Cavaliers, Golden State Warriors and Sacramento Kings.

"Coming in from the NBA and then being here in college, basketball is all the same -- relatively the same," Smart said. "You've got to coach the game. You're going to look at different ideas and thoughts on offense and defense.

"That part is going to be the same. The biggest thing I had to adjust to and learn more than anything was the recruiting aspect of everything along with your day-to-day business you have to do preparing for a basketball game, preparing young men to go out and play, all those things there.

"That was one of the things that I had to adjust to and learn as I got into it. I came in here with no ego, just to focus on growing and learning as a college coach."

"Coach Smart, I think he's going to do really good," Williams said. "He knows the game really good. He's one of the guys I always talk to if it's one of our games coming up or one of our past games."

"I've been around Coach Muss for so long and have a good understanding of how his approach is to being here and watching him work every day," Smart said. "I shared with the team that I'm going to do everything I can to stay close to the vest with how we've been doing things, but I've got to coach in my style and my personality.

"I talked with [Musselman] about that and he said just do what you need to do and keep preparing this team to get ready to play a game."

Musselman had surgery to repair a full tear of the supraspinatus tendon and partial tears to the infraspinatus and subscapularis tendons in his left shoulder, according to an Arkansas news release.

"Almost six weeks ago, Coach Musselman sustained a significant shoulder injury in practice after a collision with a player," Dr. Wesley K. Cox said in a statement. "An MRI confirmed his shoulder had torn tendons and would require surgery. The goal was to use daily physical therapy and treatment as well as a steroid injection to delay the surgery as many weeks as we could, none of which have offered any significant improvement.

"At this time, surgery to repair the tears was necessary due to the amount of pain and instability he was experiencing and to mitigate the risk for significant complications in the future.

"Coach Musselman is expected to do very well and ultimately make a full recovery."

Musselman injured his shoulder on Dec. 2 in practice when senior forward Trey Wade -- 6-6 and 220 pounds -- accidentally fell on him when Musselman got too close on a defensive close-out drill.

Smart said Musselman did his best to try to push through practices and games.

"But obviously I knew what he was facing just like everyone on staff knew what was taking place," Smart said. "One of my sons had the same surgery, so I knew that he played football through it and he tried to keep pushing through it to a point where it just couldn't go any farther. And he eventually had it, and he bounced back greatly from that surgery.

Musselman previously missed one game in his three seasons at Arkansas, against Abilene Christian last season when he was in covid safety protocols. He did not test positive, but had been in contact with a staff member who did.

"When I talked with Coach [after the Missouri game] ... he told me, 'Just go out and coach the game. Just do what you need to do.'

"So that's the approach that I'm taking. But I'll communicate with him on everything that I'm doing.

"Every thought, idea that I might have, I'll run that by him, so there are no surprises if he sees something on television or at practice that he can comment on.

"I'll always have reasons as to why I'm doing certain things. But he and I have had such a great relationship for so long that he trusts what I'm doing. The background benefit of that is that I'm trying to help him win games, and he's trying to help me grow as a coach."

The Razorbacks stopped their SEC losing streak at three games with their 44-point victory over Missouri.

"I think that game was a really big game for us," Williams said. "I feel like it's going to get us going and give everybody a taste of what it feels like to win in the SEC.

"To send Coach Muss off with that type of win is going to make him even more ready for when he does come back." 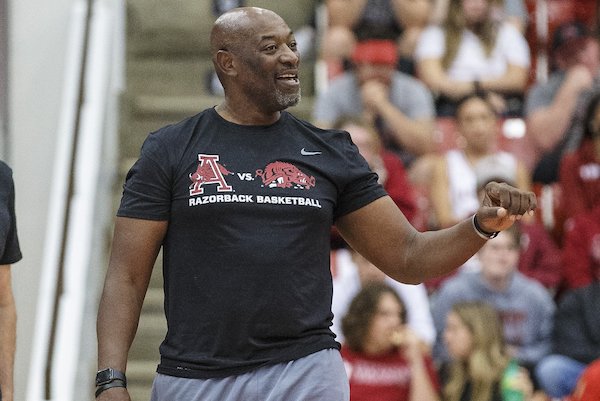 Arkansas assistant coach Keith Smart is shown during the Razorbacks' Red-White Game on Sunday, Oct. 17, 2021, at Barnhill Arena in Fayetteville.
David Beach/Special to the Democrat-Gazette