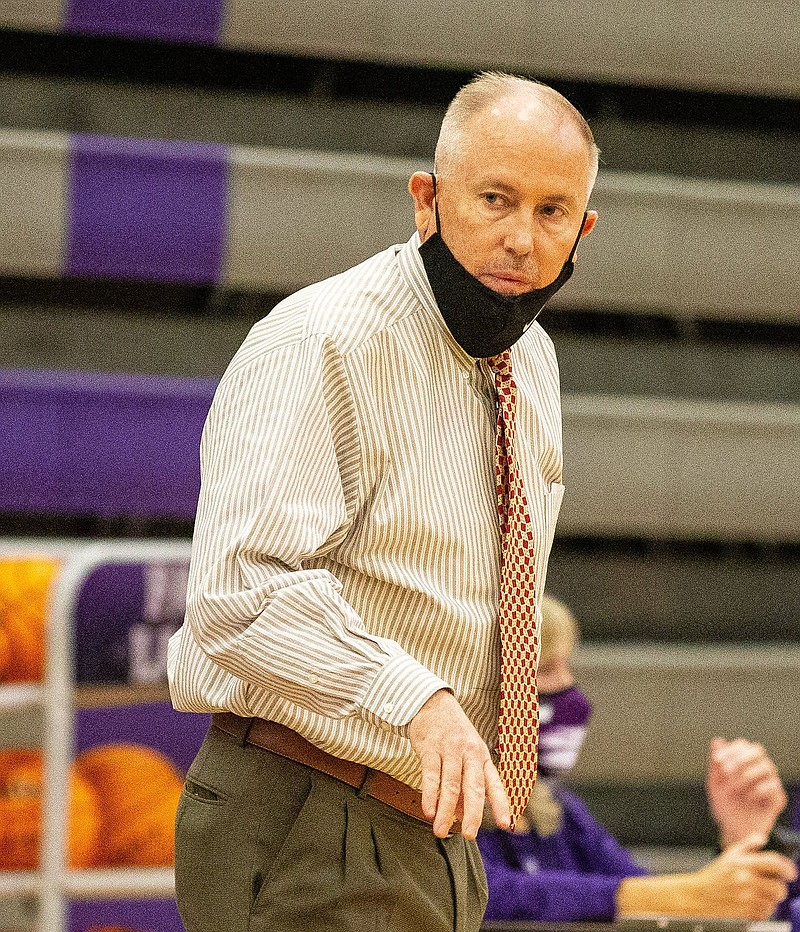 After losing four starters from a team that captured a state championship last year, Fort Smith Northside girls Coach Rickey Smith wasn't sure where his team would be sitting at the midway point of the season.

Fifteen games in, and he's no longer wondering.

"Las Vegas odds wouldn't have been very high for us to be above .500," Smith said. "I don't want to say the girls have surprised me, but they've surprised me. To be sitting here at 15-0. ... The kids have really played well.

"They're trying to keep the tradition alive."

That tradition is one that's been centered around winning ever since Smith left Stamps to take over for Karen Aston as the Lady Bears' coach in 1994. In his 28 years at Northside, Smith has amassed 694 victories and has never had a losing season. He's also led the Lady Bears to eight state titles and 18 conference championships.

This year's team has the look of one that can challenge for yet another crown. Northside (15-0, 2-0 6A-Central), ranked No. 3 in the state, has held opponents to 40 points or fewer 10 times and allowed just two teams -- Marion and El Reno, Okla. -- to score more than 50 points.

"We returned one really good starter in Yani Releford and had two or three girls back that played a lot last year," Smith said. "I moved up three freshmen, too. And really, I've been pleased with the team as a whole because they've done everything we've asked of them.

"But we've yet to play the powerhouses so we're going to have some tough games coming."

The powerhouses Smith referred to are No. 1 Conway and No. 2 North Little Rock, two teams that have occupied the top spots in the rankings all season. The Lady Bears were set to get their first taste of Conway today, but the game was canceled.

Still, the Lady Wampus Cats are the team Smith said he believes everyone is chasing.

"I mean, if I can compare them to anybody, I'd compare them to Secretariat," he said in reference to the racehorse that completed a Triple Crown in 1973 by winning the Kentucky Derby, Preakness and Belmont Stakes. "Conway may be on a track by themselves. Quite honestly, they could actually be going for their third or fourth state championship easily if the ball had bounced one or two ways.

"Those kids are all older now, and they play so well together. I've seen a lot of teams, and boy, Conway is legit. They can score, lock in on defense, and they're deep. So we know what's ahead. But I'm proud of my team because no one expected us to be here. They're trying to compete at the highest level and have given everything they've got."

May as well scout

Maumelle Coach Michael Shook found himself with a little bit of free time on his hands this week after the Hornets had Tuesday's game against Jacksonville scrapped. So he went and did the one thing he felt may help his players prepare for their next game.

He went and checked out today's opponent, Sylvan Hills. In fact, he actually got a two-for-one out of the deal because not only does Maumelle (11-2, 0-0 5A-Central) play the Bears today, the Hornets also play Jan. 18 against Little Rock Christian -- the team Sylvan Hills just happened to be playing when he went to scout them out.

"Might as well take advantage of that opportunity," he said. "They're the next teams on our schedule, so I went and killed two birds with one stone. This conference is tough, and we know it."

Shook said he also knows the other teams will be gunning for Maumelle after it finished runner-up a year ago. The Hornets are 12 games above .500, but the two losses are what clearly stick out in the coach's mind.

Maumelle trailed by 25 points in the opening quarter of an eventual 84-72 loss to No. 1 North Little Rock 84-72 on Nov. 20. Then after reeling off six wins in a row, the Hornets were blasted by No. 7 Bentonville 78-48 during the John Stanton Classic in Conway.

"Those were by far our two worst games of the year," said Shook, who recently won his 200th game as coach. "In that first quarter against North Little Rock, we looked awful. And then that Bentonville game, when it went downhill, it really went downhill."

But the one thing Shook mentioned he pointed out to his guys that there wasn't enough cohesion in those losses, and it showed on the floor as well as the scoreboard.

"When we're locked in playing hard on defense and together on offense, I think we're an A-plus team for sure," he said. "The thing is, we're not at that point all the time. We've had several games where we've gone up, and then it's like everything changes and things get close. When that happens, we're like, 'Oh, let's turn it on again.' We can't play games that way."

Sylvan Hills responded to one of its worst losses of the year -- a 70-37 thrashing by Vilonia on Jan. 4 -- by stunning Little Rock Christian 60-56 on Tuesday. Shook took notice of how the Bears stayed on the attack throughout, even when things broke down on both ends of the floor. He said he expects to see that same kind of effort from Sylvan Hills tonight.

"We've got to be more consistent," he said. "I'll be the first to admit that I don't take nonconference as serious. Of course I want to win everything, but in nonconference, our rotations are different, and we experiment with a lot of stuff.

"But now we've got a grasp on some things, so I anticipate us being better in what we do."

Keep on keeping on

Like a bunch of other programs around the state, Manila has had to adjust its schedule because of the problems covid-19 has caused. For Coach Cody Edgar, that's not necessarily a good thing.

"We're rolling along," he said. "I just want to keep playing because when you miss games and have to make them up, it can mess up your rhythm. And for us, we were finally starting to score the ball well, and I don't want any down time."

There's a reason Edgar wants his Lady Lions to keep things moving. Manila (17-1, 7-0 3A-3), Class 3A's No. 5-ranked team, has played some of its best basketball in recent memory, and according to its first-year coach, defense has been the bread and butter.

The Lady Lions are allowing 26.7 points per game, have given up more than 50 points twice and are beating opponents by more than 21 points.

"From Day 1 back in June when I first got here, we did nothing for two months but shell drills and one-on-one defensive stuff," Edgar said. "Just worked on guarding the ball and containing the dribble, and the girls have bought in. We're scoring a little bit more than last year, too, but we've been phenomenal on defense.

"We've had players come in that are averaging 20 points a game, and we'll hold them to three. A kid will come in averaging 18, and we limit them to five. So that side of the ball has been our calling card."

While senior Kara Watts has led the Lady Lions' charge on defense, Edgar is getting ample scoring from senior Sadie McDonald, who averages 21 points, and junior Madison Hitchcock, who's averaging 16 points, 7 rebounds and 6 assists. He also noted junior Kinley Shelton and senior Olivia May are each providing lifts by hitting consistently from the outside.

"We just want to keep doing what we're doing," he said. "There's a lot of school records we can break in just Year 1. But our ultimate goal above all else is to get to the state tournament. I've been a part of teams that went 32-2 and got beat in the first [round] of regionals. "

Acorn's mettle has been tested several times, and win or lose, Coach Chris Ledbetter noted he's come away feeling better about his team.

Even it meant losing one of his top players.

"I honestly think we're one of the better groups in 2A," he said. "Now I did lose my point guard [Jake Lyle], who recently broke his foot. He really sets us up and gets us in to everything, but he'll be out for six weeks.

"I'm not going to say it'll be good for us, missing him, but I've got some younger guys that I think will come along because of the injury. I believe that'll help us in the long run because that may make us a little bit deeper."

Ledbetter admitted that competition his team has faced has helped make them better, too.

Acorn (17-5, 4-0 2A-4), which is ranked No. 5 in Class 2A, has taken on a wide range on teams, from Class 6A Little Rock Catholic to Class 1A No. 4 County Line. The Tigers also faced the top team in its class, Dierks, in the final of the Cossatot River Tournament last week but came up short.

That defeat did little to deter Ledbetter's faith in his group, though. With senior guard Damian Bohlman continuing to pile up big numbers and a supporting cast that he feels has found their niche, there's not much reason for him to feel otherwise. He also raved about his team's overall leadership and experience as being crucial to what they've been able to do thus far.

Ledbetter did, however, find out something about the Tigers in their game against Catholic that he said could make them even more dangerous.

"We lost [50-38] to them, but honestly it was more like a four- or five-point game," he said. "But I kind of noticed that we've got to start playing faster. I couldn't tell up until that point. And with the competition we've faced, you learn even more.

"We've still got some tough games coming. We've still got Lavaca [Class 2A No. 2] coming up so we'll certainly be battle-tested when the postseason rolls around."