The evolution of Poitier, his acting roles 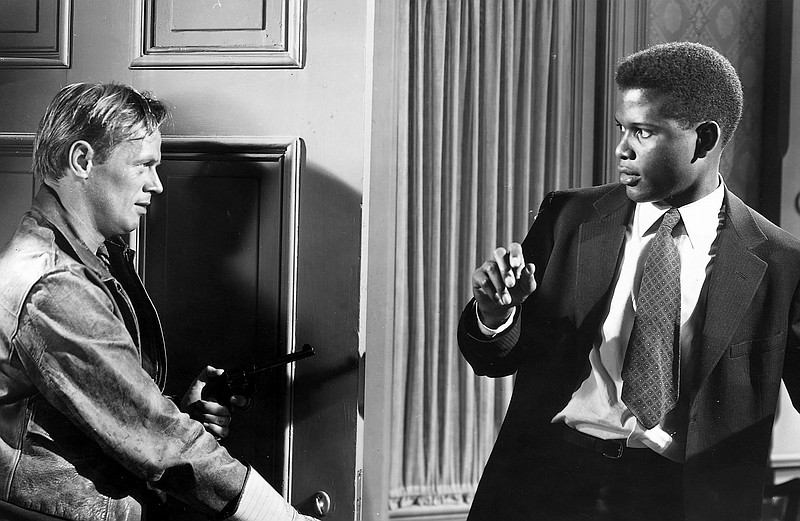 The late Sidney Poitier became a movie star at a time when Hollywood tended to relegate Black actors to roles as servants, appearing for just a scene or two, often as comic relief. But he was rarely a supporting player, even at the start of his career. He took leads, specializing in a specific type: the educated, well-mannered, middle-class professional who had assimilated into the parts of white society willing to accept him.

Throughout his first two decades in show business, Poitier's films often promoted powerful messages about the ignorance of bigotry. His charisma and grace made him popular with white and Black audiences alike, and played no small part in easing some of the racial tensions in America -- just by giving controversial issues an amiable advocate.

These 11 Poitier movies are from 1950 to 1999, when he semiretired. They offer a good overview of not just the scope of his career, but of how the country changed during his 50-plus years in show business.

After a relatively short stint as a New York stage actor, Poitier made an auspicious big-screen debut in 1950 with writer-director Joseph L. Mankiewicz's unusual hybrid of social drama and film noir. As a doctor struggling against the ingrained racism of his patients -- including a career criminal played by Richard Widmark (who made two more films with him) -- Poitier allowed audiences to see what even accomplished Black Americans were facing every day, and how that kind of abuse could rattle a person's psyche.

Stream it on The Criterion Channel; rent or buy it on Amazon Prime, Apple TV, Google Play, Vudu or YouTube.

In Poitier's best film of the '50s, he plays a longshoreman who becomes fast friends with a co-worker (played by John Cassavetes) who's secretly AWOL from the military. Though one's an upstanding citizen and the other's a deserter, they are treated differently by their cruel boss (Jack Warden), who doesn't like seeing any of his people getting chummy -- especially not when one's white and one's Black. Less preachy than many of Poitier's pictures from this era, Martin Ritt's "Edge of the City" has a bracing naturalism, born of its roots in the adventurous, progressive New York theater and television scenes.

In a sublime bit of cultural kismet, playwright Lorraine Hansberry's masterpiece arrived when Poitier was the right age to tackle one of theater's great characters: the pragmatic, prickly Walter Younger. Unlike the softer-edged, friendlier men Poitier had been portraying up until then, Walter doesn't have much faith in the great dream of integration. He argues with his more idealistic family members about whether they should use a financial windfall to move into a white neighborhood, and his cynicism brings to light arguments that were being had by Black families everywhere in the '50s and '60s -- except on the big screen.

Poitier won a best actor Oscar for "Lilies of the Field" (1963), which would become the first of a short string of films (including "To Sir, With Love" from 1967 and "Guess Who's Coming to Dinner") in which he played handy, disarming individuals, helping white people improve their attitudes. Most of these movies are more interesting now for how they reveal the subtle racism of well-meaning left-leaning filmmakers, but "A Patch of Blue" is a refreshing exception, and the first movie to watch from this batch. As a kindly soul who helps a poor, abused blind teenager stand up for herself, Poitier is saintly but grounded. And writer-director Guy Green's adaptation of an Elizabeth Kata novel is unusually wise about how sometimes class matters as much as race in America.

Rent or buy it on Amazon Prime, Google Play, Vudu or YouTube.

In between his social-issue films, Poitier made plenty of genre pictures where race was a key element of the plot (as in the two-fisted 1958 adventure "The Defiant Ones," and the 1966 Western "Duel at Diablo"). The most popular of these is the best picture-winning "In the Heat of the Night," in which the actor plays a brilliant Philadelphia homicide detective, Virgil Tibbs, who is drafted to help a small-town Mississippi police department crack a difficult case. Refusing to defer to his virulently prejudiced hosts, Tibbs carries himself as a truly free man, in ways that audiences back in 1967 found thrilling. He'd go on to play the character twice more: in "They Call Me Mister Tibbs!" (1970) and "The Organization" (1971).

The critical reputation of this Oscar-winning blockbuster hit has diminished in recent years. It has been held up as an example of Hollywood's heavy-handed social messaging -- rather than as a groundbreaking interrogation of some purportedly open-minded white and Black families' conflicted feelings about interracial marriage. Nevertheless, Poitier gave one of his most memorable performances in the film, using his charisma and wit to peck away at the underlying prejudices of the older generation, represented here primarily by characters played by the venerable movie stars Spencer Tracy and Katharine Hepburn. The points that director-producer Stanley Kramer and screenwriter William Rose are making may be blunt, but Poitier delivers them in electrifying fashion. Tracy (in his last role) and Hepburn are good, too.

After acting in films almost nonstop throughout the '50s and '60s, Poitier slowed his output from the mid-'70s onward, in part because he began working more behind the camera. He made his directorial debut in 1972 with this offbeat Western, which arrived toward the start of the blaxploitation era, when the movie industry began to realize the commercial potential of films about self-actualized Black protagonists. Joined by Harry Belafonte and Ruby Dee, a frequent co-star, Poitier cast himself in "Buck and the Preacher" as a skilled scout having lightly comic adventures on the frontier. While attuned to 19th-century racial strife, this film is more an amiable entertainment than a hard-hitting commentary. As such, it has held up better than some of the star's more incendiary projects.

Many of the Black-themed films that filled American theaters in the '70s were raunchy and R-rated, but Poitier had hits in that era with three PG caper comedies, which he directed and starred in alongside Bill Cosby and a host of A-list Black entertainers. The first in this loose trilogy was "Uptown Saturday Night," with Poitier and Cosby playing buddies who go on an all-night odyssey through their neighborhood -- encountering colorful characters played by the likes of Belafonte, Flip Wilson and Richard Pryor -- while searching for a stolen lottery ticket.

One of Poitier's first feature films was a 1951 adaptation of Alan Paton's bestseller, "Cry, the Beloved Country," an unusually forward-thinking expose of the horrors of South African apartheid. Poitier returned to that theme 24 years later with "The Wilby Conspiracy," an excellent chase thriller in which he plays a revolutionary on the run from the authorities with a sympathetic white buddy (played by Michael Caine). Though essentially an action picture, the movie does a fine job of making injustice come alive. Poitier and Caine would later team up again for the 1997 TV movie "Mandela and de Klerk," dramatizing apartheid's last days.

Stream it on Tubi; rent or buy it on Amazon Prime, Apple TV, Google Play or YouTube.

Poitier made some baffling professional choices during the '80s and '90s, when he rarely acted, and directed more than his share of duds. But it's hard to fault him for joining Robert Redford, Dan Aykroyd, David Strathairn, River Phoenix and Mary McDonnell for the ensemble adventure-comedy "Sneakers." As a former CIA agent aiding a team of well-meaning super-hackers, Poitier makes good use of his iconic screen presence, representing one of the last sparks of '60s idealism in an increasingly synthetic age.

One of Poitier's last screen performances was in this 1999 TV movie, in which he plays an intensely private, self-sufficient, elderly Georgian whose mental competency is questioned when he refuses to sell his land. Noah Dearborn is the kind of character Poitier played throughout his career -- skilled, stubborn and deeply decent -- but it says something about how the culture changed during his lifetime that his race is no longer the defining element in his story. That's a direct consequence of how Poitier spent his career defying stereotypes and fighting to bring layered Black individuals to the screen.

Stream it on IMDbtv; rent or buy it on Amazon Prime, Apple TV, Google Play, Vudu or YouTube.

Print Headline: The evolution of Poitier, his acting roles