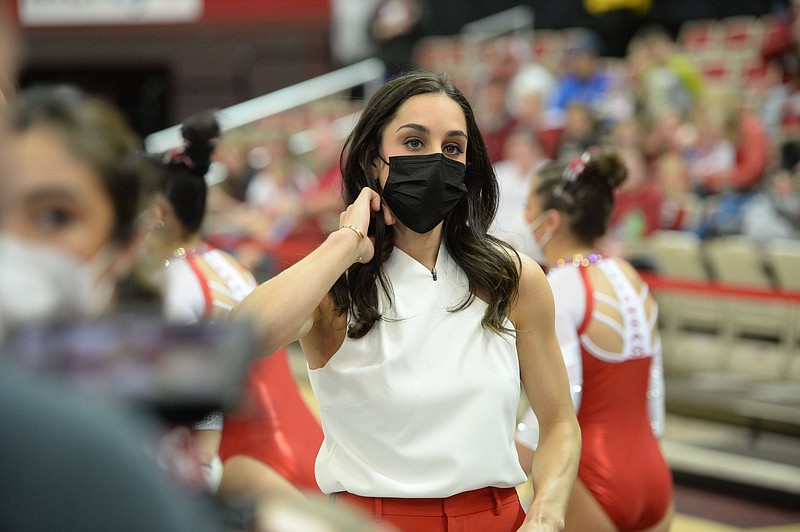 Arkansas Coach Jordyn Wieber and the No. 15 Razorbacks will host No. 8 Auburn tonight in the school’s first meet this season at Walton Arena. Wieber said the Razorbacks hope to draw as many as 10,000 fans to Walton Arena. (NWA Democrat-Gazette/Andy Shupe)

FAYETTEVILLE -- Jordyn Wieber's vision for University of Arkansas gymnastics is that the program will eventually outgrow Barnhill Arena and require a bigger venue.

The third-year head coach and the Razorbacks will get a major trial run in a bigger facility in an historic encounter against Auburn tonight at 7:30.

Wieber and Arkansas volunteer assistant coach Kyla Ross will be joined by Auburn freshman Suni Lee as Olympic gold medalists at the meet, and they'll have the company of a fourth Olympian in Arkansas assistant coach Chris Brooks, Wieber's fiance and the captain for Team USA at the 2016 Rio Olympics.

Wieber said Wednesday ticket sales have been brisk for the first of its kind meet, which had originally been in the planning stages for the 2021 season before smaller crowds were mandated by the covid-19 pandemic.

"I absolutely love the environment in Barnhill Arena," Wieber said. "I think it's really unique. I think it's unlike any other gymnastics arena in our conference, if not in the country.

"I quickly realized with the growth of the program and the level of the gymnastics growing and also the fan base growing that we were going to outgrow Barnhill a little bit. So that was a vision I had. Wasn't sure how quickly it was going to happen."

The Razorbacks hope to have very close to a full roster after injuries and covid issues prevented veteran Abby Johnston and freshmen Leah Smith, Kalyxta Gamaio and Cami Weaver from competing in last week's narrow win over Ohio State.

"We have all the athletes who were out for last week's meet back in the gym practicing," Wieber said, though she cautioned it's hard for an athlete who missed a week of practice and competition to jump right back into action the following week.

Smith and Gamaio are potential all-around performers when they return to full strength, while Johnston was a regular in the floor exercise and vault lineups last season after transferring from Nebraska.

Arkansas got off to a rough start last week with a team score of 195.45 that was good enough to beat Ohio State and give the program its first season-opening victory since 2014.

The Razorbacks had falls or major errors on all four events and had to count a fall on the uneven bars. Their top score was 49.1 on the floor exercise, which is shaping up to be the Razorbacks' top rotation again, though it was well off the pace of last year's team in the opener.

"This is an incredibly talented team," Wieber said. "We still have a lot to learn, especially about our freshmen, who have not competed in a college gymnastics meet yet. ... We've got to get them out there competing and gather that information.

"My main goal for this team on Friday is to go out and have a really strong performance and put up six solid routines on every event. I'm not expecting them to be perfect. ... Really, what I want to see from our team is just a confidence level and to see them relax and really celebrate this amazing, historic opportunity that we have for the program, and not view it as more pressure but more so an opportunity to compete in front of a big crowd."

Wieber said she is aiming for a score in the 196 range tonight.

The Razorbacks and Tigers have perhaps the most closely contested rivalry in SEC gymnastics, with Auburn holding a 20-19-1 lead in the all-time series.

Arkansas pulled into a tie by posting a school-record 197.425 in a win at Auburn last season, but the Tigers pulled back ahead at the SEC Championships in Birmingham, Ala., last March.

So Arkansas could regain the series tie with a win in the big setting tonight. The fact the gold medalist Lee and Auburn wound up as the first opponent for Arkansas at Walton Arena was a matter of fate.

"It just kind of happened that way and fell into place," Wieber said. "A lot of it was figuring out what weekend would work around the basketball schedule, both women's and men's basketball. And we wanted it to be a really strong competition against a great opponent.

"We wanted our fans to be able to come out and see a lot of great gymnastics. The Auburn meet just happened to be the one that worked best. And it just so happens that Suni is on their team, and we're going to have some great talent in the building."

The Tigers got off to a much better start than Arkansas by posting a 196.05 in last weekend's opener to down North Carolina and Bowling Green in a tri-meet at Chapel Hill, N.C.

Fifth-year senior Drew Watson won the vault with a 9.95 to help the Tigers post a 49.35 on that event. Senior Darrian Gobourne notched a 9.875 to share the floor exercise title, while Lee was second on the balance beam (9.875) and fellow freshman Sara Hubbard was second on vault (9.875).