March for Life on track, with distancing 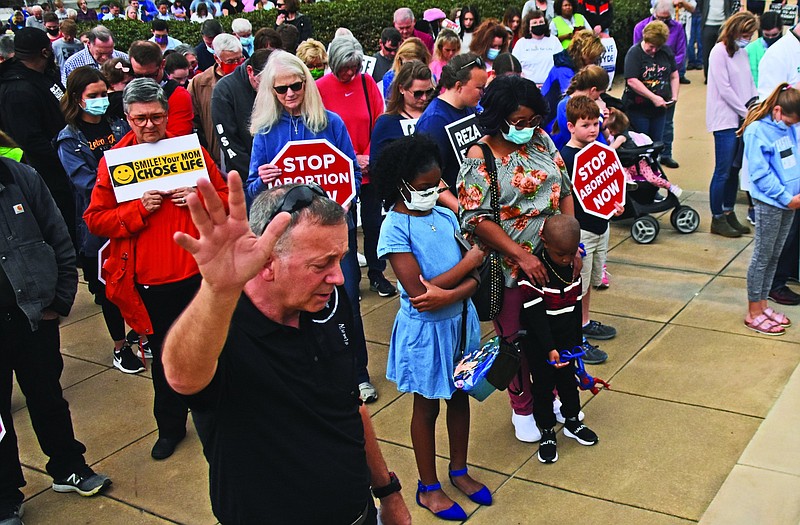 Participants in last year’s March for Life paused for prayer during a rally on the steps of the state Capitol. Catholics will hold a Eucharistic procession as well as a Mass for Life prior to this year’s march. (Arkansas Democrat-Gazette/Staci Vandagriff)

Nearly 49 years after the U.S. Supreme Court struck down the nation's anti-abortion laws, the Catholic Diocese of Little Rock will help mark the anniversary in the state capital, holding a Hearts for Life conference for adults this evening followed by a Eucharistic procession and a Mass for Life on Sunday.

"It's a celebration of the gift of life and our firm belief in a consistent ethic of life," said Catherine Phillips, director of the diocese's Respect Life Office.

A separate anti-abortion event for youths has been canceled by the diocesan Catholic Youth Ministry Office because of the covid-19 pandemic; the adult conference also was scaled back.

In past years, as many as 700 young people and their chaperones would converge on Little Rock for the Weekend for Life youth conference. Before its cancellation, organizers had anticipated welcoming 300 participants.

For those who participate, safety will be a priority and masks will be available, Phillips said.

"To be honest, we hope that everyone is vaccinated and boosted when they come, but we realize that's not even possible for everyone," she said.

In a statement in December 2020, Bishop Anthony Taylor said getting vaccinated is not only "morally permissible" but "morally praiseworthy, inasmuch as it protects the health of the person being vaccinated and likely protects others as well."

Sunday's procession and the march are outdoors, and the Mass will be held at the Statehouse Convention Center, Phillips said.

"There's great ventilation, and there's really high ceilings and a huge, huge room, so we can maintain a distance between one another which is similar to outdoors," she said.

At the service, "we're going to encourage the use of masks, we're going to have them available, but we're not going to mandate that," she said.

During the Eucharistic procession, "Our bishop carries Jesus in the blessed sacrament through Riverfront Park in downtown Little Rock and people just walk behind to express our belief that Christ brings ... light to the dark corners of the world," she said.

Last year's Arkansas Right to Life postponed the march for two months, "in the interest of safety," noting that many of the participants were children, elderly or disabled and citing "political unrest across the U.S. and reports of potential volatility at our State Capitol -- combined with the ongoing high number of covid-19 cases locally."

This year, the march returns to its normal time near the anniversary of the Roe v. Wade decision, the Jan. 22, 1973, ruling classifying the right to an abortion as constitutionally protected.

"We're in the Bible Belt, and we have a lot of great evangelicals, Baptists, Lutherans, Assemblies of God, Church of Christ -- all kinds of denominations -- that support right to life," she said.

"Each baby is created in the image of likeness of God, each human person is, and that's where our inherent dignity comes from," she said.

As a result, Catholics also oppose the death penalty as well as assisted suicide, she said.

"Every life is valuable, precious [and] deserves respect and protection from the very first moment of life, which is at fertilization, all the way to the end and natural death," she said.

Print Headline: March for Life on track, with distancing