Sabotage called pretext to invade by Compiled by Democrat-Gazette Staff From Wire Reports | January 15, 2022 at 4:13 a.m. 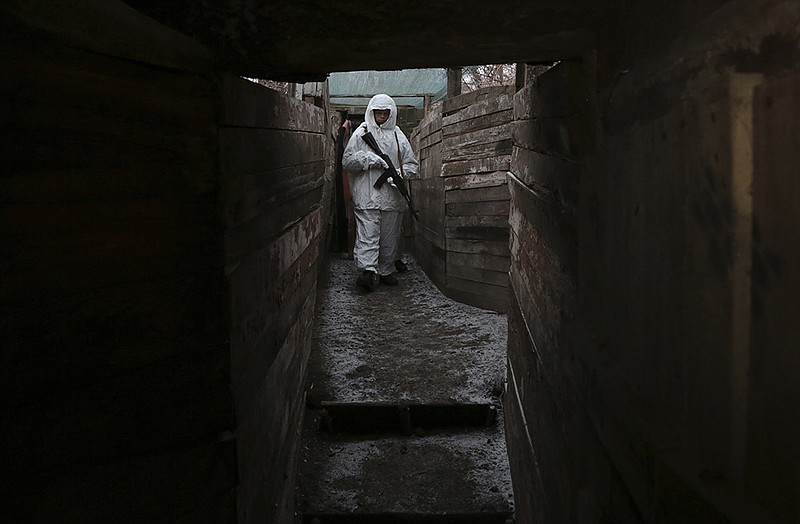 A serviceman takes position in a trench Friday at the line of separation between Ukrainian troops and Russia-backed separatists about 20 miles southwest of separatist-controlled Donetsk in eastern Ukraine. (AP/Alexei Alexandrov)

WASHINGTON -- The Biden administration Friday accused Moscow of sending saboteurs into eastern Ukraine to stage an incident that could provide Russian President Vladimir Putin a pretext for ordering an invasion of parts or all of the country.

The White House did not release details of the evidence it had collected to back up its charge, though one official said it was a mix of intercepted communications and observations of the movements of people.

In an email, a U.S. official wrote that "Russia is laying the groundwork to have the option of fabricating a pretext for invasion, including through sabotage activities and information operations, by accusing Ukraine of preparing an imminent attack against Russian forces in eastern Ukraine."

The Biden administration has said Putin has not made a decision yet on whether to invade. But John Kirby, the Pentagon spokesman, called the intelligence about the false-flag operation "very credible" during a briefing Friday.

Kirby said U.S. intelligence indicates "Russia is already working actively to create a pretext for a potential invasion, for a move on Ukraine." He said an operation designed to look like an attack on Russian-backed separatists or Russian-speaking people in Ukraine could serve as an excuse to intervene.

"There's a fidelity here to the information that we have that we believe is very credible," Kirby said. "And again, we've seen this kind of thing before out of Russia. When there isn't an actual crisis to suit their needs, they'll make one up, and so we're watching for that."

[Video not showing up above? Click here to watch » arkansasonline.com/115psaki/]

The U.S. official who described the intelligence spoke on condition of anonymity and said the assessment found that "the Russian military plans to begin these activities several weeks before a military invasion, which could begin between mid-January and mid-February. We saw this playbook in 2014 with Crimea."

Russia annexed the Crimean Peninsula, a part of Ukraine, that year. It also sent military forces, which operated without wearing uniforms, into the Donbass region of eastern Ukraine, where the war has been grinding on.

The accusation came a day after the conclusion of a week of diplomatic encounters with Russia, moving from Geneva to Brussels to Vienna, in an effort to deescalate the confrontation. But those talks ended without any agreement to pull back the approximately 100,000 Russian troops massed on the Ukrainian border, and without U.S. or NATO agreement to demands from Moscow that it pull back all forces from former Warsaw Pact countries that have joined NATO.

The release was clearly part of a strategy to try to prevent the attacks by exposing them in advance. But without releasing the underlying intelligence -- some of which has been provided to allies and shown to key members of Congress -- the United States opens itself up to Russian charges that it is fabricating evidence.

In past years, Russia frequently recalled the deeply flawed intelligence case the United States built for invading Iraq, as part of an effort to discredit the CIA and other U.S. intelligence agencies as political operatives.

The official said the United States had "information that indicates Russia has already prepositioned a group of operatives to conduct a false-flag operation in eastern Ukraine," where Russian-backed forces have been fighting a war of attrition with the Ukrainian government. The operatives "are trained in urban warfare and in using explosives to carry out acts of sabotage against Russia's own proxy forces."

Two other American officials said the U.S. assessment was the result of a combination of intercepts and movements on the ground of particular individuals. That could explain the administration's reluctance to declassify granular information, for fear of alerting the Russian operatives whose movements are being tracked.

[Video not showing up above? Click here to watch » arkansasonline.com/115kirby/]

"This is a page out of the Russian playbook," one of the officials said. "We're very mindful that Russia will try to invent some pretext to carry out a coup attempt."

One senior administration official said there was concern that saboteurs or provocateurs could stage an incident in Kyiv, the Ukrainian capital, prompting a possible pretext for a coup.

President Volodymyr Zelensky of Ukraine declared several months ago that he believed a coup attempt was underway, but it never materialized.

The U.S. accusation also embraced disinformation operations, charging that "Russian influence actors are already starting to fabricate Ukrainian provocations in state and social media to justify a Russian intervention and sow divisions in Ukraine." Those include, the official said, "emphasizing narratives about the deterioration of human rights in Ukraine and the increased militancy of Ukrainian leaders."

Such posts also blame Western nations for stoking tensions. Last month, the number of daily posts along such lines in Russian-language social media increased by 200% from the previous month, the official said.

Top Russian officials also have embraced that narrative. In December, Putin falsely suggested that a Ukrainian "genocide" was targeting ethnic Russians in the country's east, reviving rhetoric that Moscow used during the 2014 invasion to justify Russian action.

[Video not showing up above? Click here to watch » arkansasonline.com/115ukraine/]

Putin has also argued that the United States and its allies have turned Ukraine into a beachhead from which to launch anti-Russian activities, creating a NATO state on Russia's border that is unacceptable to Moscow.

In another development Friday, hackers took down dozens of Ukrainian government websites and posted a message on one saying, "Be afraid and expect the worst."

Diplomats and analysts have been anticipating a cyberattack on Ukraine, but proving the source of such actions is difficult. Ukraine's Foreign Ministry did not directly blame Russia for the attack but pointedly noted that there was a long record of Russian online assaults against Ukraine.

"We have not seen such a significant attack on government organizations in some time," it said. "We suggest the current attack is tied to the recent failure of Russian negotiations on Ukraine's future in NATO," it added, referring to Moscow's talks with the West.

The message was posted in three languages -- Ukrainian, Russian and Polish -- in what seemed like an effort to obfuscate the origins of the hackers and their motives, and shift blame and suspicion elsewhere.

"Ukrainians! All your personal data was uploaded to the internet," the message said. "All data on the computer is being destroyed. All information about you became public. Be afraid and expect the worst."

It also raised a number of historical grievances between Poland and Ukraine.

The attack came within hours of the conclusion of talks between Russia and the United States and NATO that sought to find a diplomatic resolution on Ukraine.

The cyberattack led to immediate pledges of support and closer cooperation with Ukraine from NATO and the European Union, exactly the opposite of what Russian diplomats had said they were seeking.

On Thursday, Russian officials said the talks had not yielded results, and one senior diplomat said they were approaching "a dead end."

Russia's deputy foreign minister, Sergei Ryabkov, said after the last round of talks Thursday that "the United States and its allies are actually saying 'no' to key elements of these texts," referring to two draft treaties on security issues that Russia had proposed to NATO and the United States. "This is what we call a dead end or a different approach."

Ukrainian government websites began crashing a few hours later, according to the Ukrainian Foreign Ministry, which said the cyberattack occurred overnight Thursday and into Friday.

By morning, the hack had crippled much of the government's public-facing digital infrastructure, including the most widely used site for handling government services online, Diia. The smartphone app version of the program was still operating, the Ukrainska Pravda newspaper reported. Diia also has a role in Ukraine's coronavirus response.

The Ukrainian Center for Strategic Communications and Information Security noted a resumption of Russian military exercises near the border in recent days and said "the hacking activity targeting state bodies could be a part of this psychological attack on Ukrainians."

Jens Stoltenberg, secretary-general of NATO, said NATO would increase its coordination with Kyiv on cyberdefenses.

"I strongly condemn the cyberattacks on the Ukrainian Government," Stoltenberg said in a statement. "NATO & Ukraine will step up cyber cooperation & we will continue our strong political & practical support."

Untangling the digital threads of such cyberoperations can take days or weeks, which is one of the appeals of their use in modern conflicts.

Ukraine has long been viewed as a testing ground for Russian online operations, a sort of free-fire zone for cyberweaponry in a country already entangled in a real-world shooting war with Russian-backed separatists in two eastern provinces. The U.S. has traced some of the most drastic cyberattacks of the past decade to Russian actions in Ukraine. 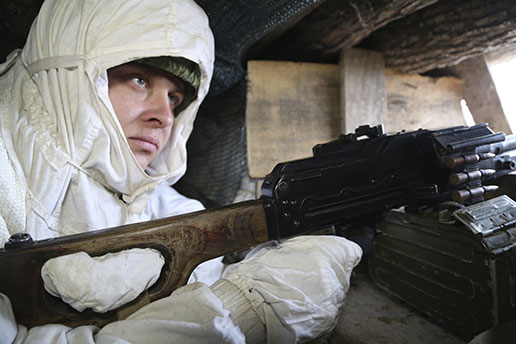 A fighter keeps watch Friday at the line of separation near Yasne village southwest of Donetsk in eastern Ukraine. Moscow has accused Ukraine of hatching plans to use force to reclaim areas controlled by Russia-backed separatists in eastern Ukraine, accusations Ukrainian authorities have denied. (AP/Alexei Alexandrov) 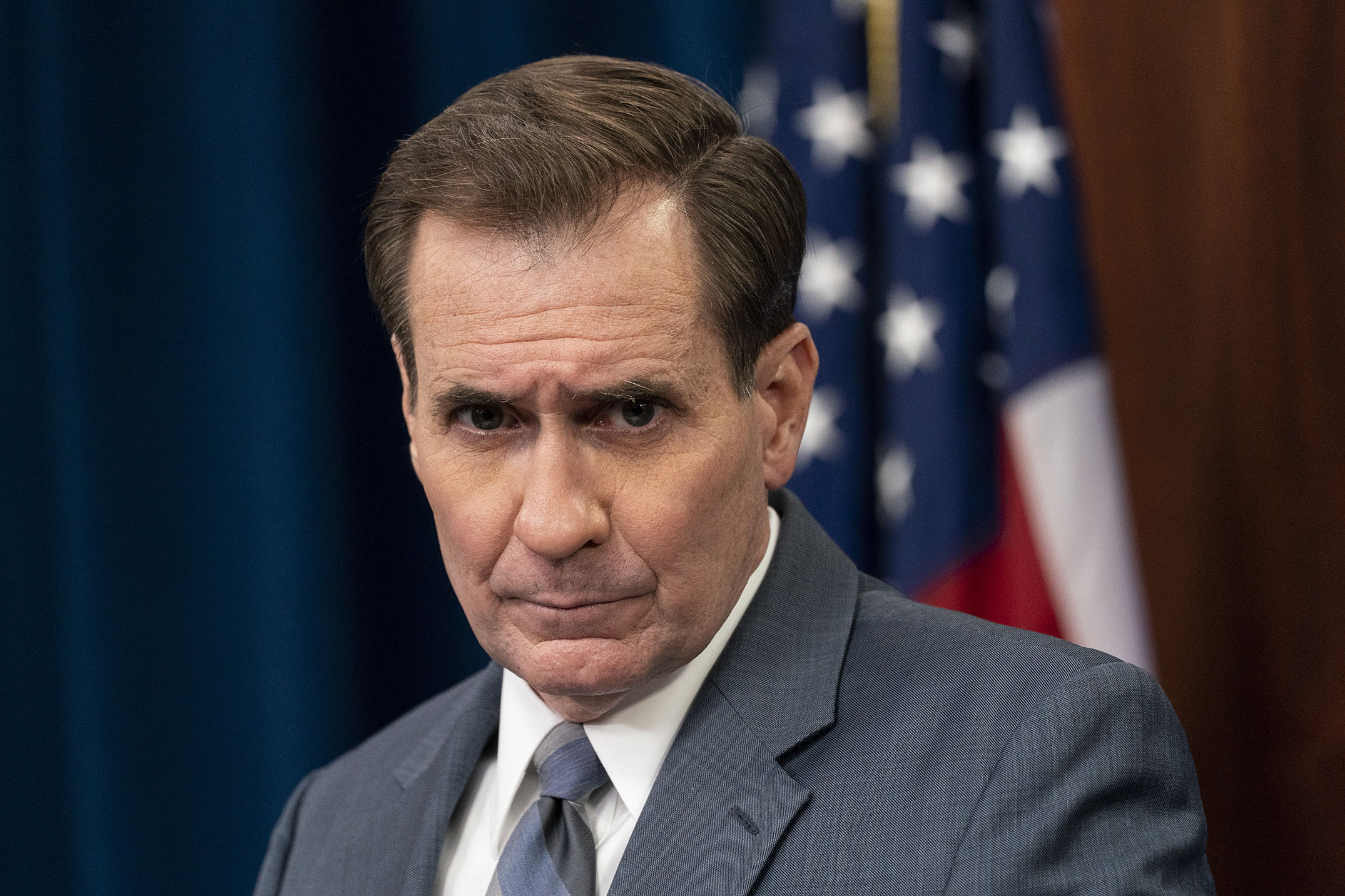