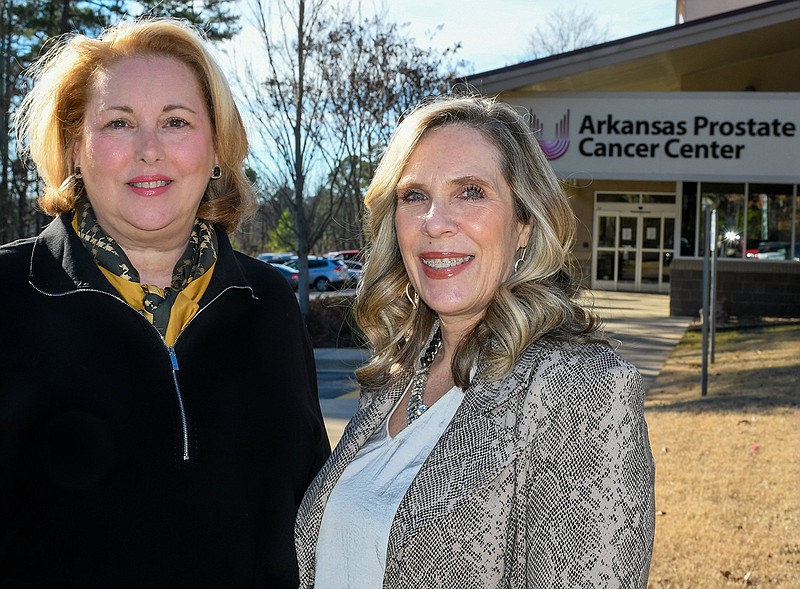 Judith Goodson and Amy Davis are organizing the Arkansas Urology Foundation’s Silver Ball celebrating Arkansas Urology’s 25th year in practice. Originally scheduled for Jan. 29, the event has been pushed back to summer due to the recent rapid rise in covid-19 cases. (Arkansas Democrat-Gazette/Cary Jenkins)

Most events on the social calendar support a worthwhile cause or sometimes, celebrate a landmark in the history of a company or organization. This year's Silver Ball, benefiting the Arkansas Urology Foundation, is a little bit of both.

Not only does the event -- which was recently postponed to the summer due to the increase in covid-19 cases -- mark the 25th year in practice of Arkansas Urology, but proceeds will go to a new fund, administered by the foundation, to increase outreach and awareness, pushing men to be more proactive regarding their health.

"Arkansas Urology has always been on the forefront of where medicine is going," says Judith Goodson, a member of the event's organizing committee and wife of Dr. Tim Goodson, a partner in the practice.

"The physicians at Arkansas Urology are all dedicated to continually renewing their skills, understanding and ability when it comes to new technologies and new treatments. This gala really is a celebration of those 25 years that have seen the development of this practice and the implementation of this practice throughout the state of Arkansas."

Established in 1996, Arkansas Urology was founded at a time when urological concerns were discussed largely behind closed doors, if at all, and has steadily led the charge to bring such medical problems as prostate cancer, sexual health and other urological conditions out of the shadows.

Part of that mission includes expansion, to better bring urological medical services within reach of more Arkansans, which Arkansas Urology has accomplished through an aggressive growth strategy. The practice has established or acquired clinics statewide, including the Arkansas Prostate Cancer Center, a surgical center, a dedicated men's health center and a forthcoming imaging center, all in Little Rock. All told, Arkansas Urology has grown to treat more than 100,000 patients annually.

"We're now all over Arkansas, serving many communities within the state that were previously without urological care," says Amy Davis, organizing committee member whose husband, Scot, is Arkansas Urology's chief executive officer. "The Silver Ball is our way of celebrating 25 years of involvement and service to our community and the state as well as raise funds that will enable us to do even more outreach to create awareness and save lives."

Prostate cancer affects millions of American men, in total about 3.3 million in 2018, per the National Institutes of Health's National Cancer Institute. In 2021, there were nearly 250,000 new cases in the United States, representing just over 13% of all new cancer diagnoses. More than 34,000 U.S. men died from prostate cancer last year.

However, data trends also show just how far the medical community has come in identifying and treating the disease. Over the past 30 years, the death rate has been cut in half, per the NIH, and while 12.5% of all men will be diagnosed with the cancer at some point in their lifetime, the five-year survival rate is 97.5% when caught early.

While prostate cancer is just one area of urological medicine Arkansas Urology practices -- others being erectile dysfunction, kidney stones, bladder health and women's pelvic and sexual health -- it is arguably most visible in its diagnosis and treatment of the disease. As part of this effort, the practice's annual Kickoff to Men's Health provides free prostate exams to hundreds of men every year.

This effort has caught several problems in patients over the years, things that, if left undiagnosed, could have progressed with tragic consequences. For those seeking treatment, Arkansas Urology has an equally robust reputation for its industry-leading treatment methodologies, utilizing the latest in technology, procedures and medicine with which to battle cancer.

"If I could point to something that Arkansas Urology does very well, I would say it's innovation," Davis says. "Our physicians are some of the top minds in the country as far as applying new, innovative procedures and medications. They really are at the forefront of urological health and they are seen within the urological community as national experts in this regard."

In 2019, the Arkansas Urology Foundation was formed, to help fund the practice's outreach and events such as Kickoff to Men's Health and others, says foundation Director Chris Shenep.

"The purpose of the foundation is to help provide health care specifically to men who can't afford it," he says. "With guys being so bad about going to the doctor in the first place, the last thing that we want preventing a guy from coming to see us is the cost of an exam. That's why our foundation is so passionate about funding free, first-time health screenings.

"When you look at how many Kickoff to Men's Health events we have done over the past 17 years, the number of men that we've screened for free, and especially the number of guys we have been able to [affect] based on finding something on one of their tests, you can see the potential we have for making a real difference in the health of Arkansans. Every so often we detect something that, sooner or later, will be cancer and if it's not caught early enough, that's when it really gets serious."

Proceeds from the Silver Ball will go to the foundation's new Mack Moore Fund, set up specifically for underwriting this important work. Named for Dr. John "Mack" Moore, the fund also serves as a lasting tribute to the longtime physician and a founding partner of Arkansas Urology. Moore will be on hand at the Silver Ball to officially unveil the new fund.

"The physicians at Arkansas Urology have picked up that torch and carried it forward. I would defy anyone to find a group of doctors who care more on the personal level for not only their patients but for the staff who work for them. I think they set the bar very high in both camps."

Scot Davis says the decision to postpone the event to later in the year was not an easy one to make.

"The AU Foundation is actively raising funds to honor one of our founding physicians, Dr. Mack Moore. Over the past few weeks, we have raised over $120,000 for the inaugural Dr. Mack Moore fund from Mack's former colleagues, patients, friends, family and philanthropists across the state and country," he says. "While we hate to postpone the event, it's rewarding to see good things come out of bad situations and this is a true example of the impact Arkansas Urology has had in the lives of Arkansans over the last 25 years." 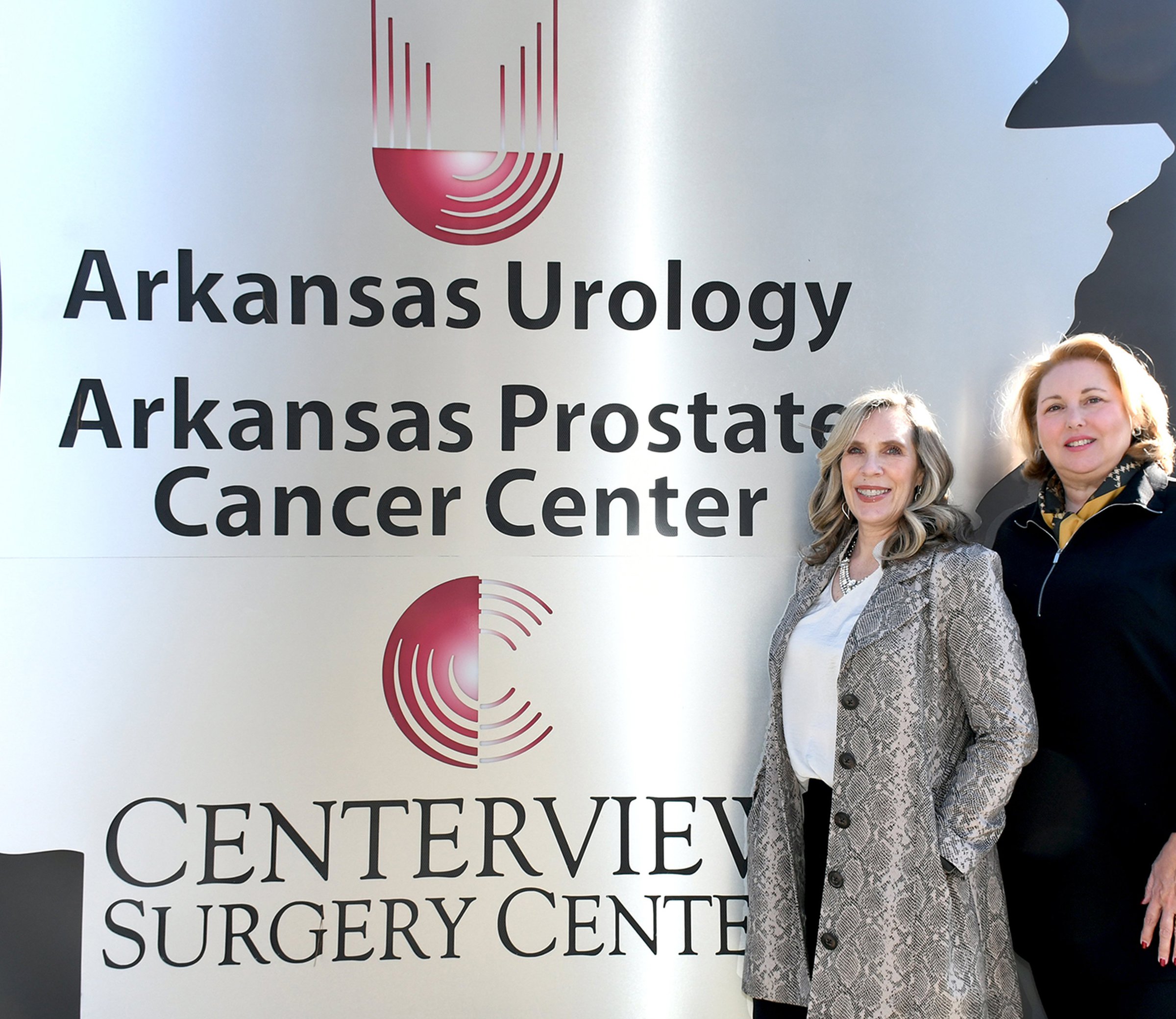 For Amy Davis and Judith Goodson, support of the Arkansas Prostate Cancer Center is a family affair. Davis is married to the center’s CEO Scot Davis. Goodson’s husband, Dr. Tim Goodson, is a partner in the practice. The women are organizing the Arkansas Urology Foundation’s Silver Ball, which has been postponed to the summer. (Arkansas Democrat-Gazette/Cary Jenkins)