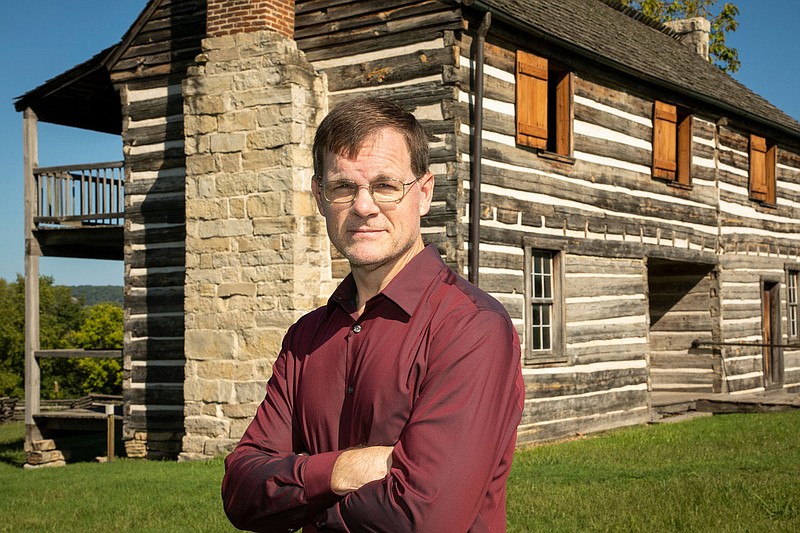 Brooks Blevins has been the Noel Boyd Professor of Ozarks Studies in the history department at Missouri State University in Springfield since 2008. But, as always, his roots remain just across the state line.

"I still maintain an official residence in Arkansas, in the house that my grandparents built on the farm in the early 1950s," he says. "I've found it very enlightening to keep one foot in Arkansas and one in Missouri, one foot in the rural Ozarks and one in the region's largest city.

"Like most college professors, my typical day varies greatly, depending on whether classes are in session and what season of the year it is," Blevins explains. "This winter, my typical day starts two hours before sunup with a 30-minute workout. If weather permits, I take a 10-mile mountain bike ride at daybreak, and then my dad and I feed our cows. I'm usually in my writing shed by 9 a.m., where I spend the day writing, researching, working with my online class and class prep for my in-person class. Depending upon my schedule, I spend a day or two each week on campus in Springfield."

The author or editor of nearly a dozen history books, Blevins' most recent release, "A History of the Ozarks: Volume 3" was recently published by the University of Illinois Press. He's currently working on "a couple of short, article-length projects -- one from the Civil War and the other set in the 1920s -- and I'm preparing a collection of essays for publication by the University of Arkansas Press in a year or so. I'm also looking forward to diving into a book-length project on the history of migrant workers (apple knockers, cotton pickers, etc.) from the Ozarks in the 20th century.

"I can't remember not being interested in history," Blevins says. "I grew up on my family's little farm in rural Izard County, surrounded by the farms and homes of many extended relatives. Stories of the old days and long-gone old-timers seemed to surround our lives. It's what motivated me to explore the history of my native hills and to try to go beyond the myths and superstitions that dominated depictions of Ozarkers."

Blevins took a few minutes to answer these questions about his work.

Q. Talk about how the series came to be? What inspired it, how long have you been working on it, have they all been published by University of Illinois Press?

A. I first had the idea of a comprehensive history of the Ozarks back in grad school in the '90s but quickly realized that was much too weighty for a doctoral dissertation. After I finished my book, "Ghost of the Ozarks," in 2012, I decided to tackle that comprehensive history. I originally planned on a one-volume work, but I reckon you could say I overdid it with the research and ended up with the unusual three-volume history instead -- all of them published by the University of Illinois Press.

A. The part of Volume 1 that generated the most feedback was the section on Native Americans in the Ozarks, especially the "Immigrant Indians" who were pushed into the region from east of the Mississippi River and who attempted to convince the U.S. government to turn the Ozarks into an autonomous Indian-controlled nation in the 1820s. Needless to say, that didn't happen, though the failed effort did inspire the government to create Indian Territory in modern-day Oklahoma. I don't think I've received a lot of "delighted" feedback over Volume 2. Slavery and the Civil War era aren't exactly fun reads. Probably the most common comment I get on Volume 2 is disbelief and despair over just how brutal the Civil War was in the Ozarks -- and amazement that the violence continued for so long after the official end of war in 1865. Re: Volume 3, I think the story of the "Ozark Jubilee" TV show in Springfield will surprise and delight a lot of people. The stories of the rise of tourism in the region -- especially Branson -- and the late 20th and early 21st century blossoming of Northwest Arkansas into a major American commercial hub is another crucial story.

Q. Talk generally about the myth of the Ozarks versus the reality of the Ozarks? How has that affected the growth and development of the region in positive and negative ways? How is it changing now?

A. From at least the early 1900s, the dominant image of the Ozarks was a land of hillbillies living behind the times. It could be a positive or negative image, depending on who was doing the telling. Folklorists, travel writers and regional boosters -- people like Vance Randolph, Otto Ernest Rayburn and Marge Lyon -- were primarily responsible for the creation and perpetuation of these stereotypes, which then influenced tourism, especially in a place like Branson. The image of backwardness also fed into the region's emergence as a great supplier of folk music and other folk products in the years after World War II. But the images, whether positive or negative, also obscured the real lives of most Ozarkers for generations, since the stereotypes were based on a relatively small subset of the population, the kinds of rural, backroads people who fascinated Vance Randolph and others looking for an alternative to the standard American story.

A. For the most part, the story of the Ozarks is just a regional variation on the American story. Our past shares more in common with general U.S. history than it differs from it. It doesn't mean that the Ozarks lacks color or character -- or that life in large stretches of the Ozarks hasn't lagged about a generation behind the mainstream American story for much of the past century or so. It just means the Ozarks and Ozarkers were never quite as exotic as they were made out to be.

Q. In the past 130 years, what are the events that were pivotal in making the Ozarks what the region is now?

A. Harold Bell Wright's popular novel, "The Shepherd of the Hills," in many ways first introduced the region to the nation and the world. It also provided the early impetus for the Branson tourism industry, which has obviously been another of the big stories of the past century. Few Ozarks stories have been more crucial than the transformation of Northwest Arkansas over the past half century. Walmart, Tyson, J.B. Hunt, and other major corporations have combined with the University of Arkansas to make the area the most affluent and dynamic part of the region, as well as the most racially and ethnically diverse. Ozarkers from other parts of the region will probably be surprised to read about the changes that have taken place in the Fayetteville-to-Bella Vista corridor just in the past few decades. 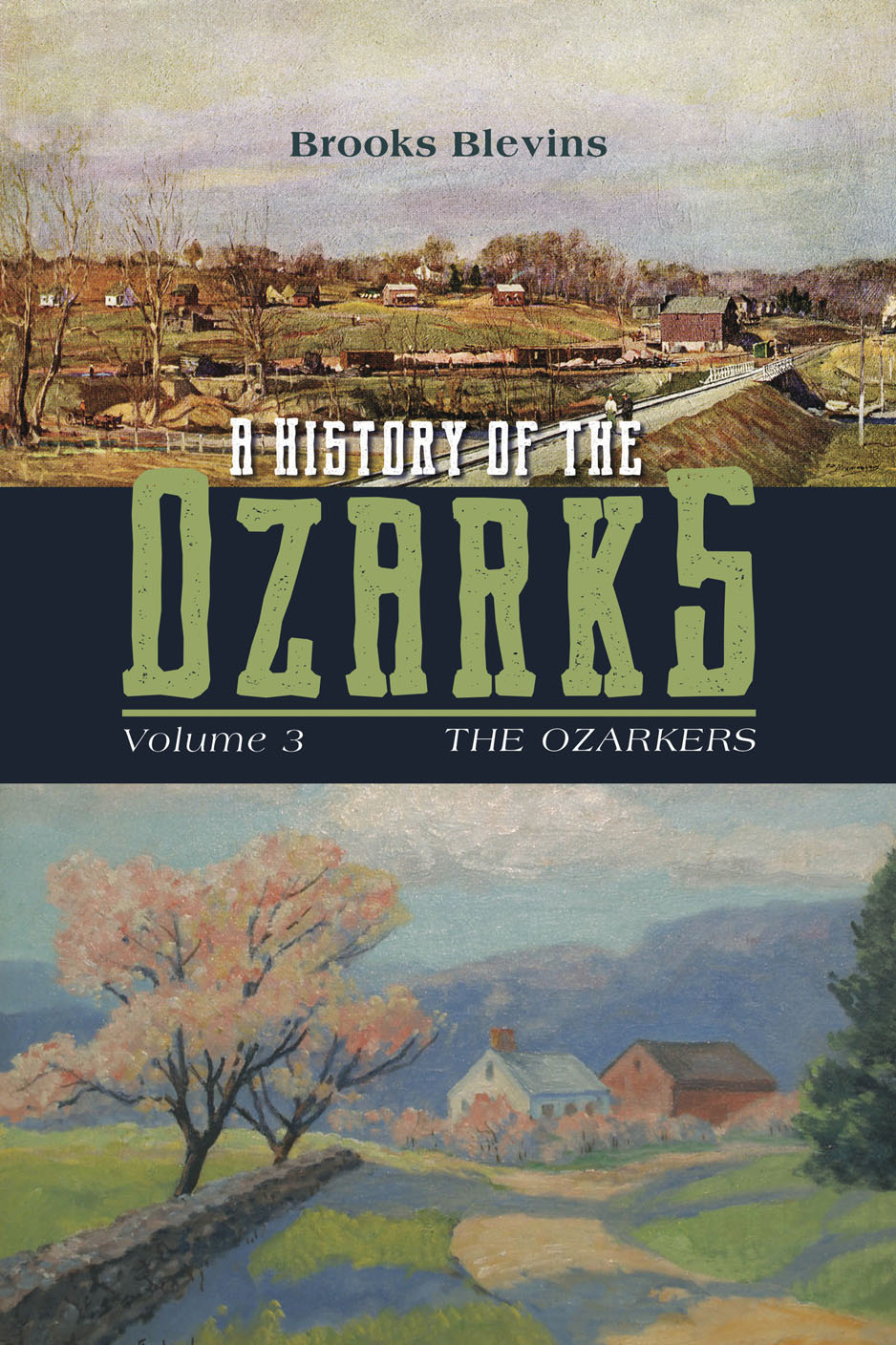 Read More About It “A History of the Ozarks, Volume 3” By Brooks Blevins
More News