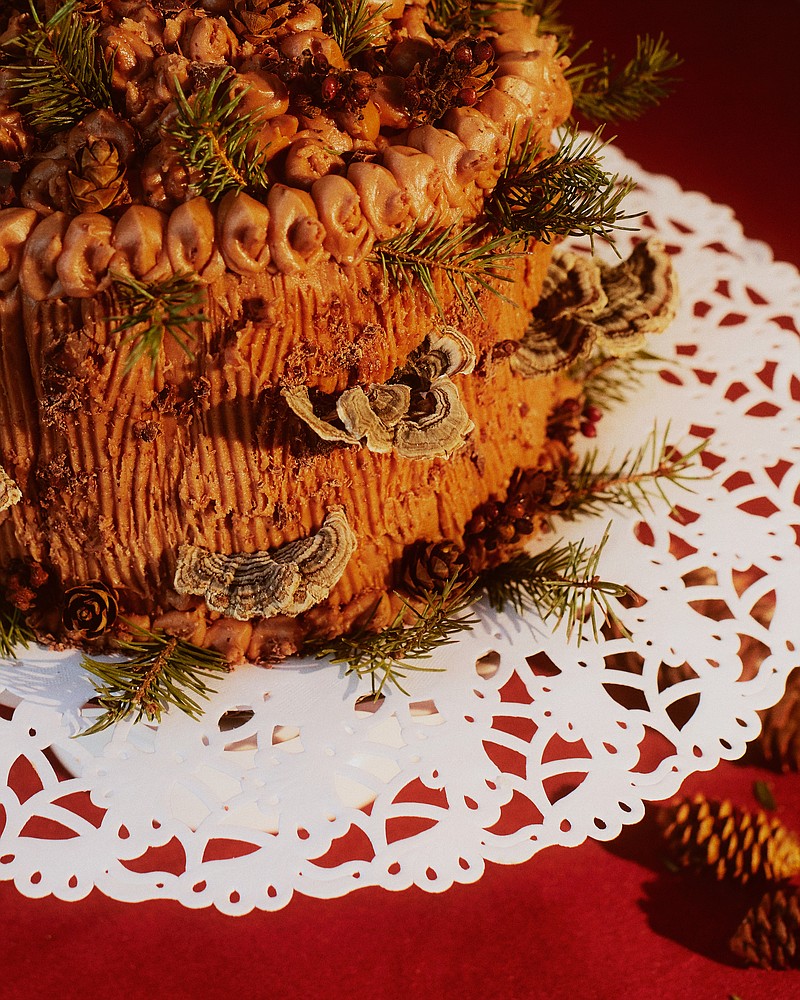 A cake by Aimee France in New York on Dec. 8, 2021. France, who is based in Brooklyn, is one of many bakers stepping away from perfectly decorated cakes and experimenting with bizarre, fantastically imperfect creations. (Ryan Jenq/The New York Times)

NEW YORK -- Adorned with dried Queen Anne's lace, red clover flowers, bolted callaloo, dried onion flowers, fresh thyme and a fresh cabbage rose on top, the cake that baker Aimee France made for a December wedding at the Loeb Boathouse in Central Park looked as if it could have been decorated with flora she found while transporting it to the location.

The olive oil cake, layered with cardamom whipped cream and a jam made of lemon, bergamot leaf and blackberries, was frosted in brown butter prosecco buttercream in France's signature style: loose, lumpy and fantastically imperfect. It was a look, she said, that was inspired by the flowers and color scheme for the wedding. But, as with most of her confections, the cake was perhaps more so influenced by her artistic mood.

"Honestly, that week I was on a big 'Phantom of the Opera' kick," she said.

France, 22, who is based in Brooklyn, started her baking business in August 2020, and cites the music and costumes of opera and ballet as frequent inspirations. She often decorates her cakes with halos of dried herbs that she forages from her home state of New Hampshire and intentionally arranges some askew so that they tilt like a frosted Tower of Pisa.

France is among a group of bakers for whom making confections that defy traditional convention is the point. From birthday cakes decorated with charcoal-colored frosting to wobbly ones made of jelly, these whimsical, wacky-looking cakes are a departure from the precision and polish that has long defined celebratory confections.

'HOW DO WE MESS WITH THIS?'

"People want to separate themselves from that perfectionist, pristine kind of wedding," said Billie Belo, 38, who founded Manhattan-based Cakes for No Occasion in July 2019. "A cake isn't mandatory anymore, so if they are going to have a cake on display, it's like, how do we mess with this?" She has made wedding cakes that are bright, gloopy and frosted with a Jackson Pollock-esque technique. "I'll just whack frosting at the cake and it'll splatter on there," she said.

Belo is one of several bakers who achieves an unconventional look by slathering her cakes in frosting that is colored so bright, it practically glows. Chicago-based artist Hyun Jung Jun, 32, takes a naturalist approach, dyeing her frosting with turmeric, beet and butterfly pea powders. A self-taught baker, she started an Instagram account, Dream Cake Test Kitchen, in June 2020 to show off her work and now receives dozens of orders a month, she said.

Madeline Bach, 26, a Manhattan-based baker who is also known as Frosted Hag, instead hoards AmeriColor food dye, which she uses to saturate buttercream in deep lapis lazuli and burnt orange tones. Whether natural or artificially colored, these cakes make the minimalist, so-called naked ones that have proliferated in past years look, well, bare.

"A phrase I've been saying nonstop is: Why make a cake plain when you can make it insane?" said Bach, who began baking in August 2020 and has made cakes for the downtown newspaper The Drunken Canal (a vanilla cake frosted with mounds of forest green and lavender buttercream, topped with glitter-coated maraschino cherries) and The New York Times Styles section (a vanilla cake with blood-orange-curd filling, topped with lemon Swiss meringue buttercream, blood orange slices, chrysanthemum flowers, sugar pearls and dried baby's breath).

Sam Raye Hoecherl, 31, who started her Brooklyn-based business The Gemini Bake in August 2019, said her use of frosting is inspired by the Wilton School, a cake-decorating movement dating to 1929 that is known for its intricate piping styles.

Admittedly cleaner looking than other bakers' frosting application, the piping on Hoecherl's cakes, which she also decorates with maraschino cherries, gold hearts and sugar pearls, is almost perversely perfect. "I really hate when people say they're gaudy, but I understand when they do," she said.

LENDS ITSELF TO NOSTALGIA

The aesthetic lends itself well to nostalgia. "I had a client who wanted a cake that looked like her parents' wedding cake in the '70s," added Hoecherl, who said she is planning to shift her focus from making celebratory cakes to confections used as props in photo shoots.

Also somewhat nostalgic are the cakes that wiggle. Jell-O, the divisive base of 1950s aspics, has made an unlikely return. "I definitely did not expect jelly cakes to make such a comeback," said Lexie Park, 32, a baker who specializes in suspending objects within her gelatin-based confections. "People have asked me to put an image of them in the jelly," she said.

Park, who is based in Los Angeles, started her company Nunchi in July 2019 and said she is now baking some 300 cakes a month for celebrations including birthdays, baby showers and even bachelorette parties. "I once had an order for a bachelorette in Palm Springs where they asked for the shapes of bridesmaids in the cake," she said. (She ended up making a palm tree-theme cake instead.) Park has also made a cake that appeared on the back cover of Olivia Rodrigo's album "Sour."

For Jena Derman, 37; Jack Schramm, 30; and Coco Lim Haas, 30; who together run Solid Wiggles, a Brooklyn-based business specializing in jelly-based cakes, the possibilities of gelatin lie in form and flavor. For instance, Solid Wiggles makes a cake called the Boozy Cosmos that, Schramm said, "has the flavors of a Cosmopolitan, but looks like outer space" because of its swirls of teal, pink and yellow jelly set against a black base.

Infused with vodka, the cake can also be miniaturized in the form of shots. (Schramm said he recently delivered 100 Boozy Cosmos cake shots to a wedding at the Metropolitan Club in Manhattan.) Solid Wiggles, which opened in September 2020 and sells nonalcoholic desserts as well as boozy ones, on average makes about 200 6-inch cakes and 300 to 400 jelly shots a month, he said.

Like Jun, many of these unconventional bakers, including Belo and France, are self-taught. But the auto-didactic nature of their businesses does not necessarily mean lower price points. Belo's pricing starts at $500 for a cake that serves 30 to 40; France's cakes start at $160 to $200 for 10 to 12.

"Hazelnuts, pistachios, macadamia nuts and spices like cardamom are all pretty expensive," France said. "I try to source most of my ingredients from local farmers or small businesses like myself, so I will pay a higher price to get a really good spice."

Buttercream or Jell-O, neo-Wilton or naturalist, these over-the-top cakes, like any (real) baked good, have the same fate: to be eaten. Or, mostly eaten. "I once had someone ask for their partner's hairbrush suspended in a Jell-O cake," said Abbie Thigpen, 26, who started baking in March 2019 and splits her time between California and Asheville, North Carolina.

Thigpen, who has made cakes for events in Austin, Texas, Asheville, New York and Philadelphia, added, "I believe that one was for an anniversary." 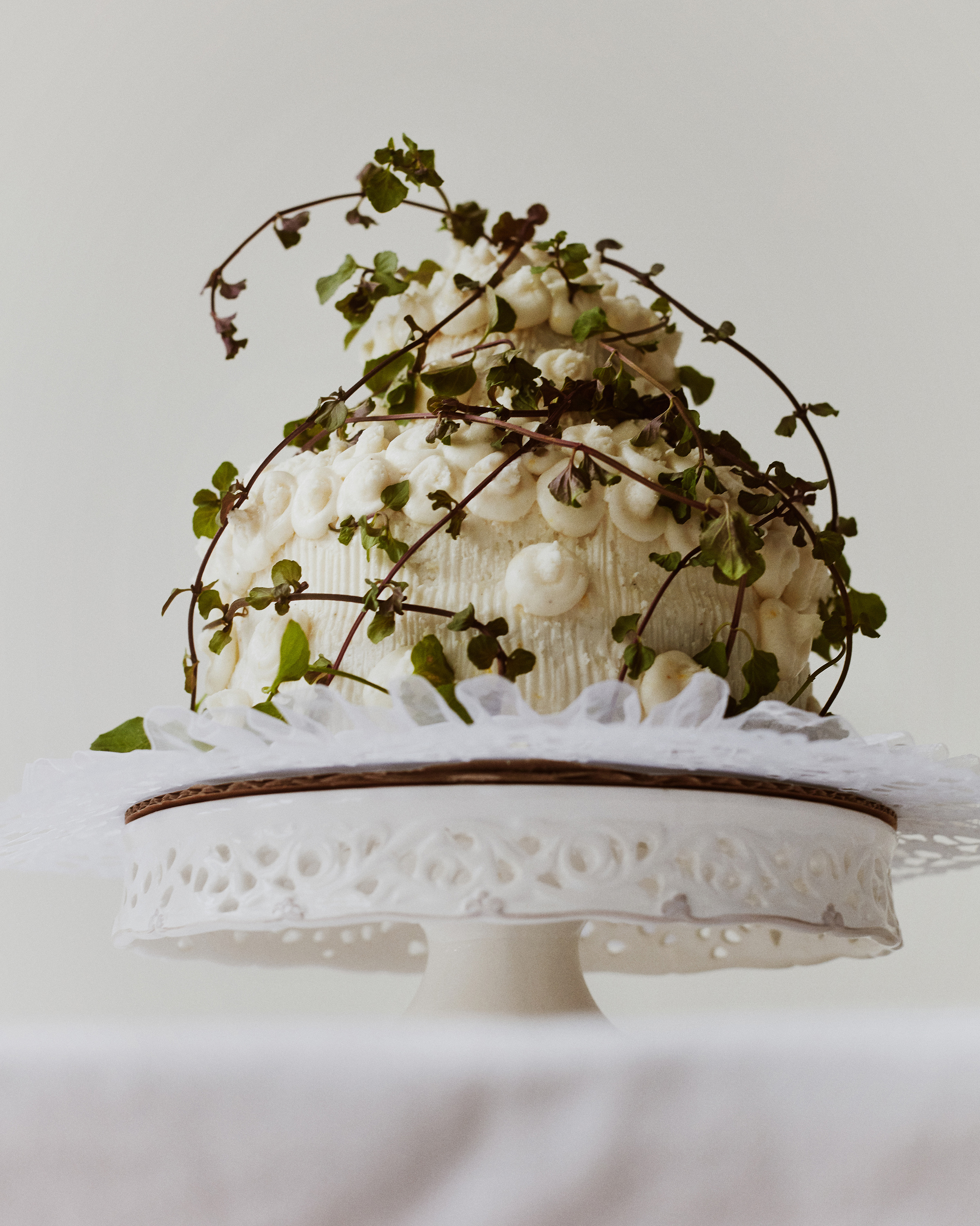 A cake by Aimee France in New York on Dec. 8, 2021. France, who is based in Brooklyn, is one of many bakers stepping away from perfectly decorated cakes and experimenting with bizarre, fantastically imperfect creations. (Ryan Jenq/The New York Times)