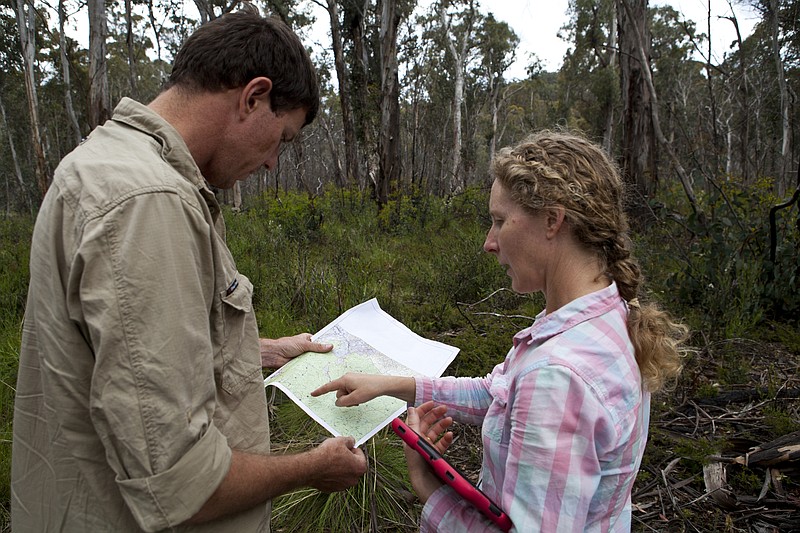 KOSCIUSZKO NATIONAL PARK, Australia -- They had been stalking the remote, fire-scorched stretch of forest for an hour in the sizzling midday sun when Karen Marsh spotted something on the trunk of a tall mountain gum.

"Do you see all the claw marks?" the ecologist asked a student research assistant, pointing to scratches in the wood above a blackened base. "Something definitely likes going up this tree."

Marsh peered up at the canopy of eucalyptus leaves, hoping to catch a glimpse of the animal she and a small team had spent weeks searching for -- a koala.

But one of Australia's most recognizable animals is getting harder to find.

Two years ago, when bush fires supercharged by climate change killed or displaced an estimated 3 billion animals, thousands of koalas were among the dead. With the blazes, drought, disease and deforestation, almost a third of the country's koalas have disappeared since 2018, according to one conservation group. The federal government is weighing whether to label half the country's koalas as endangered.

The collapse is especially severe in New South Wales, where the bush fires destroyed 70% of some koala populations and a state inquiry warned that the species will probably go extinct before 2050 without urgent government intervention.

Marsh and her colleagues had traveled to Kosciuszko National Park on a mission. For decades there had been speculation that koalas roamed its 1.7 million mountainous acres. Now, with the 2019-2020 bush fires boosting funding and urgency, the scientists aimed to determine whether koalas were hiding in one of the country's best-known wilderness areas.

The discovery would do more than just increase the known number of koalas. It would also add to growing evidence that koalas can live at higher elevations, raising hopes that the marsupials might survive global warming better than feared.

So far, however, several weeks of searching had produced only enigmatic scratches on trees like the ones Marsh now examined, some teeth marks that might or might not belong to koalas, and some potential koala scat.

Marsh turned her eyes from the trees to the ground.

"Let's see if there's any poo," she said, as she searched for the cylindrical, eucalyptus-scented dung of a koala. Instead, there were only wombat droppings. But years of studying koalas had taught her that the animals are adept at blending into gray gum trees. She sighed as she headed back to her pickup to survey another section of forest.

"I'd love to know how many koalas we just walked past," she said.

Koalas have survived this long because of their elusiveness. Their small brains and slow movements make them easy to capture or kill. But when British colonists arrived in 1788, it was a decade before they recorded seeing one of the 10 million koalas estimated to have inhabited Australia at the time. The first specimens were dismembered paws obtained from Aboriginal guides, leaving the British baffled as to what the creature looked like until 1803, when three koalas were captured and given to the governor of New South Wales.

"An animal whose species was never before found in the Colony is in His Excellency's possession," reported the Sydney Gazette in 1803, likening the koala to a wombat with soft gray fur, teeth like a rabbit and sharp talons for climbing trees. "Its food consists solely of gum leaves, in the choice of which it is excessively nice."

Australia's koala population plummeted over the next century as the animals were hunted for their fur, a practice that culminated in a 1927 Queensland cull that killed at least 600,000 in a month.

Koala killing was outlawed, but the animals continued to suffer from a chlamydia epidemic and a habitat shortage as eucalyptus forests were paved for subdivisions. Although adapted to Australia's frequent dry spells, the animals couldn't cope with a climate-change-fueled drought in 2018 and 2019 that saw dehydrated koalas literally dropping from trees.

Then came the Black Summer bush fires, which burned more than 20% of Australia's forests.

Marsh, a research fellow at Australian National University in Canberra, watched as the blaze roared to within a few hundred yards of her house. She and her colleagues began receiving calls from people who had rescued koalas, some badly singed but others simply emaciated.

"They were in awful condition," Marsh said of the roughly 30 koalas that ended up at the lab. For the nocturnal animals, even a small rise in temperature can make them less hungry. But heat can also play havoc with a koala's ability to break down the toxins in eucalyptus.

While Marsh and her colleagues nursed the koalas back to health, they were pleased to see the notoriously picky eaters were able to consume some types of epicormic growth, the green shoots that sprout from burned eucalyptus trees and can be especially toxic. That enabled the researchers to release the animals into the scorched landscape a few months later. When they did, they were surprised to find that koalas that had survived in the bush were doing just as well.

"Essentially, they recovered by themselves in the wild," Marsh said, adding that the findings, though still provisional, suggest koalas that survive bush fires are less susceptible to starvation than feared.

It's hard to say how many koalas perished in the Black Summer fires. WWF Australia estimates that 60,000 were killed or injured. The Australian Koala Foundation says the species shrank by 30% in the past three years to about 50,000, though government estimates are several times as high.

What is clear is that the fires rekindled popular concerns over an animal that many Australians identify with, even if most have never seen one outside a zoo. Conservationists renewed calls for the government to declare koalas endangered -- a decision on their status in New South Wales, Queensland and the Australian Capital Territory is three months overdue -- and additional funds suddenly became available to study the poorly understood animals.

That was how Marsh ended up at a campground just outside Kosciuszko National Park in December, perched over a picnic table, studying a map studded with blue stars.

Scientists have long speculated that the stunning wilderness surrounding Australia's highest peak could harbor koalas, but a 1940 sighting was followed by decades of silence. Then, in 2016, a motorist spotted a male koala crossing a highway in the park and snapped a picture. The incident sparked renewed interest, and in the past three years, National Parks cameras set up to detect invasive species such as foxes and deer in Kosciuszko have captured images of koalas on four occasions.

With a grant to go searching for the mysterious marsupial population, Marsh used a koala habitat suitability model to select about 80 spots for small, battery-powered audio recorders she hoped would catch male koalas bellowing to potential mates during the night. The thousands of hours of audio would be sent to a lab in Sydney, where they would be run through special koala-call recognition software. Researchers would then listen to any hits to confirm that they were koalas and not a park ranger driving past in a pickup truck.

"I've heard many, many koalas, so I feel confident," Marsh said when asked about her ability to identify the mating calls.

After examining the map, she and an ANU student research assistant went to survey the trees at several sites while James Skewes took another student to set up audio recorders.

Skewes, an ecologist accustomed to the bush, powered his pickup truck over fallen logs and streams until his GPS device pinged. Then he and the student, Ryan Lindenmayer, searched for a dead tree on which to put the recorder. Skewes checked the audio settings using an app on his phone. They'd have to return in a few weeks to swap the memory card and batteries.

Skewes was encouraged by the green tufts that sprouted from scorched eucalyptus trees at most of the sites. While it was once thought koalas didn't live above about 3,300 feet, the elevation at which eucalyptus leaves lose some of their nutritional content, several years ago scientists discovered a population of koalas that compensate by chewing bark.

"This would be a good refuge for them as we lose other habitats to climate change and development," Skewes said as he drove to the next site, stirring a pair of outrageously colored king parrots. And finding a "flagship" species like koalas could also lead to the protection of lesser-known but more endangered species in the park.

"I'd love to just look out and see a koala," he said as he set up another recorder. "We would say, all right, we know they're here."

As dusk fell on the campsite, kangaroos grazed on the banks of a bubbling creek. A few weeks into their two-month project, the researchers had seen snakes, possums, wombats, wallabies, blue-tongued lizards and the droppings of wild horses, but no koalas. Now they were preparing to go spotlighting, the process of methodically shining flashlights into trees at night in the hope of seeing the reflection of an animal's eyes.

"Can someone please spot a koala," Marsh said in half-serious desperation as she and Skewes divided up the flashlights. "That's all I'm asking."

If the audio recorders were a broad net, then these nighttime forays were stabs in the dark.

"Spotlighting is a bit like looking for a needle in a haystack," Marsh said. "You have to be in the right place at the right time, looking in the right direction."

A half-hour later, Marsh and a student research assistant, Ashley Davies, climbed out of the pickup truck onto a desolate trail where owls hooted and frogs croaked. A half-moon provided the only illumination until Marsh switched on her headlamp.

But before the two could start spotlighting, Marsh heard an odd gurgling from the trees. She turned her light toward the sound and suddenly two small eyes beamed back from a branch.

"That's a yellow-bellied glider!" Marsh said, trying not to shout.

The rare find wasn't a koala, but it was another threatened species of marsupial, one that Marsh and her colleagues were also surveying. She made notes about the type and location of the tree before starting the spotlighting.

The glider had raised hopes that they would also see koalas here. But as Marsh and Davies walked separately through the forest, their flashlights found only empty gum trees.

Back at camp, they shared excitement over the glider, tempered by the frustration of another day without seeing a koala.

With the koala mating season ending this month, the researchers have only a few more weeks to search for the animals in Kosciuszko. But they are only now recording some of the most promising sites, and the first batch of audio files have already come back with lots of potential hits.

As the researchers begin to go through them, Marsh remains optimistic. You can't protect koalas if you don't know where they are, she said, yet Australians haven't looked very hard.

"There are probably more out there," she said. "But they are really hard to see." 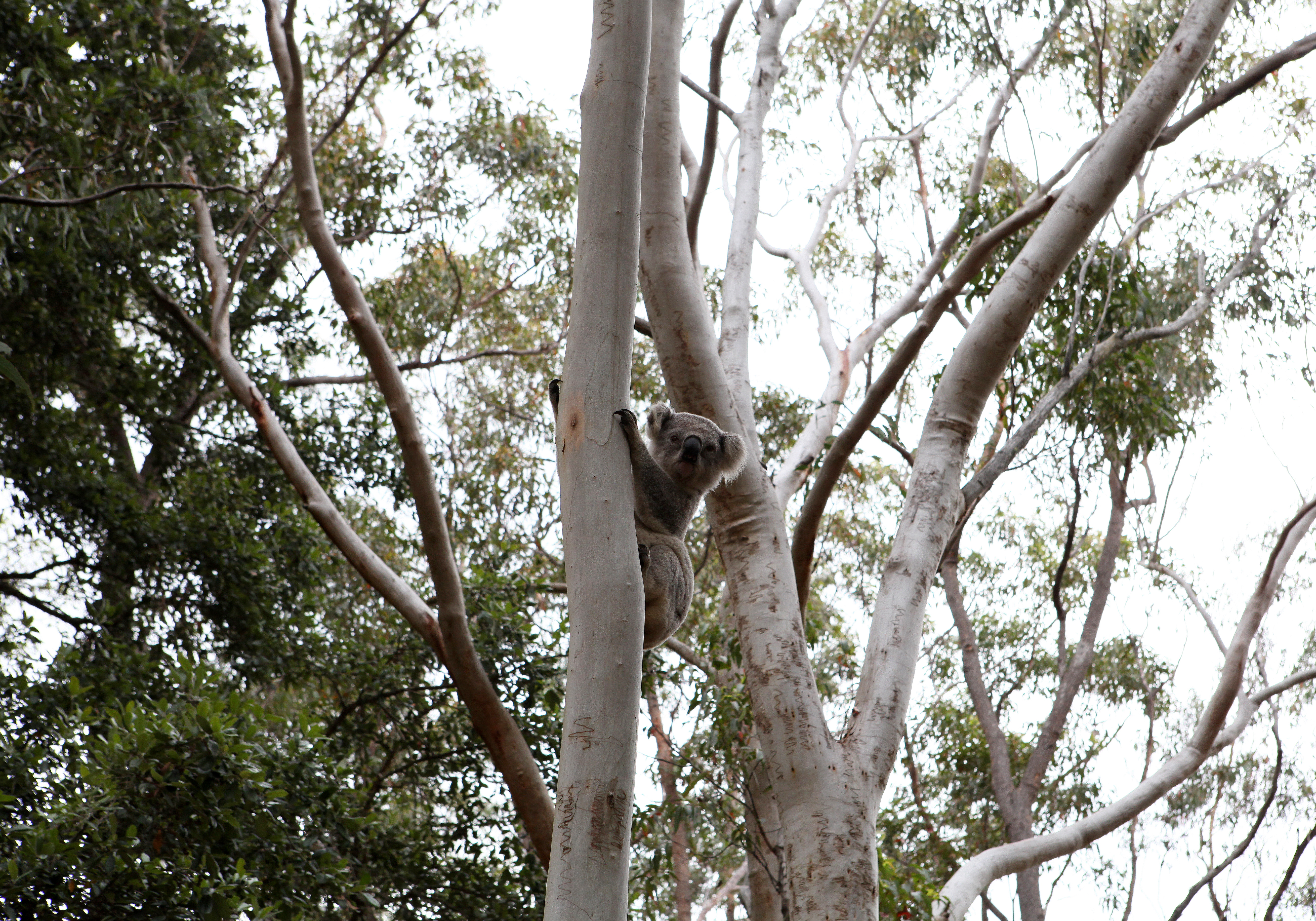 A koala clings to a eucalyptus tree near Yengo National Park, a few hours north of Sydney. MUST CREDIT: Washington Post photo by Michael E. Miller.