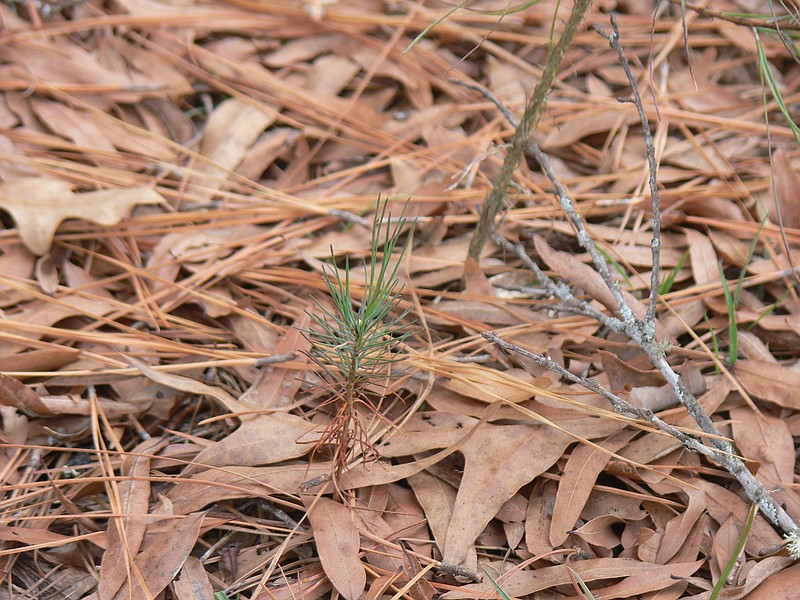 Location is everything to a loblolly pine seedling; it will not survive long where larger trees shadow the forest floor. The death of a big tree opens possibilities for new life. (Special to the Democrat-Gazette/Jerry Butler)

I think that I shall never see, a poem lovely as a tree. ...

A tree that may in summer wear a nest of robins in her hair.

One of the most poignant children's books, "The Giving Tree" by Shel Silverstein, seems to hold a lesson for adults as well. It begins, "Once there was a tree and she loved a little boy."

In Latin, the word for "tree" — arbor — is feminine. Just as English speakers might refer to inanimate objects such as hurricanes and ships using the pronouns "she" and "her," so classical Roman speakers and writers used feminine pronouns to talk about "arbores."

French for "tree" is masculine, but some species, such as the grapefruit tree, are feminine. The Portuguese word for tree, "arvore," is feminine. Germanic words for most species of trees are feminine.

Scientifically speaking, the loblolly pine has female parts and male parts. The male parts produce that ubiquitous yellowish-green pollen that covers cars and driveways in early spring, and the female parts release the germinated seeds contained in cones that fall to the forest floor to yield new life.

Incidentally, other kinds of trees (like the persimmon and the holly) have exclusively female and male parts, so it is more precise to speak of those trees as either "she" or "he" than "it." The females bear fruit, the males do not.

Recent research into the fungal/root system of trees has given dendrologists a new perspective on the role of old growth in a forest. In "Finding the Mother Tree: Discovering the Wisdom of the Forest" (Knopf, 2021), author Suzanne Simard, a professor of forest ecology, discusses a recently discovered phenomenon whereby older, established trees communicate and nourish younger trees via fungal networks.

As can be assumed from the title of the book, the author speaks in feminine terms to describe this maternal-like relationship among trees.

I have used the pronouns "she" and "her" to refer to a loblolly pine. Such usage does not follow conventional English grammar that speaks of "a tree" or "trees" in a gender-neutral way, using "it" or "they." I use "she" not out of any sentimentality, but because this concession to personification conveys more precisely the co-dependency between trees and humans in the biosphere.