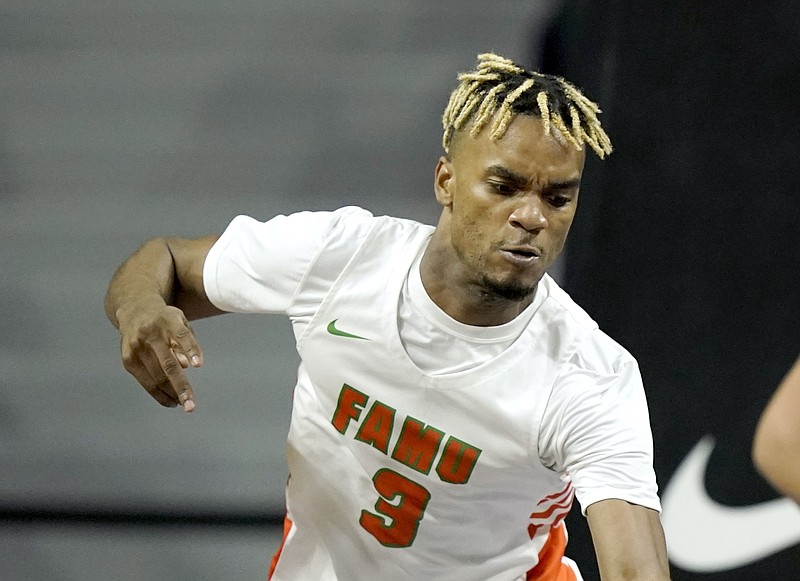 Florida A&M's MJ Randolph is shown during a basketball game in Manhattan, Kan., in this Nov. 10, 2021, file photo. Against the University of Arkansas at Pine Bluff men’s basketball team on Saturday, Jan. 15, 2022, Randolph finished with 25 points, including 4 of the Rattlers' 8 points in overtime. (AP/Charlie Riedel)

No lead the University of Arkansas at Pine Bluff men's basketball team built was ever safe.

Ahead by as many as 12 points in the first half and 7 in the second half, the Golden Lions had no answer for slowing down Florida A&M University's M.J. Randolph.

The Southwestern Athletic Conference Player of the Week finished with 25 points and helped the Rattlers claw back to force overtime and take a 71-66 victory Saturday at H.O. Clemmons Arena.

The Rattlers (4-11, 2-2) turned to Randolph -- who scored a combined 54 points against Southern and Grambling State universities and made 21 for 27 from the field in those games -- for a potential game-winner in the final 9.8 seconds of regulation, but his 3-point attempt rimmed out. Randolph did not shoot as well from the floor at UAPB (7 of 22), but made 11 of 14 free throws.

The Lions, who were missing starting guards Shawn Williams and Kylen Milton for undisclosed reasons, dropped their third straight game and fourth in their last five after leading 45-38 early in the second half. They made 23 of 59 (39%) from the field, including 6 of 17 from 3-point territory, while holding FAMU to 24 of 63 (38.1%) from the floor, including 3 of 10 from the arc.

Brandon Brown scored 17 points and totaled 8 rebounds to lead UAPB, which led 28-27 at halftime. Brahm Harris had 14 points, Kshun Stokes 11 and Dequan Morris 10 for the Lions.