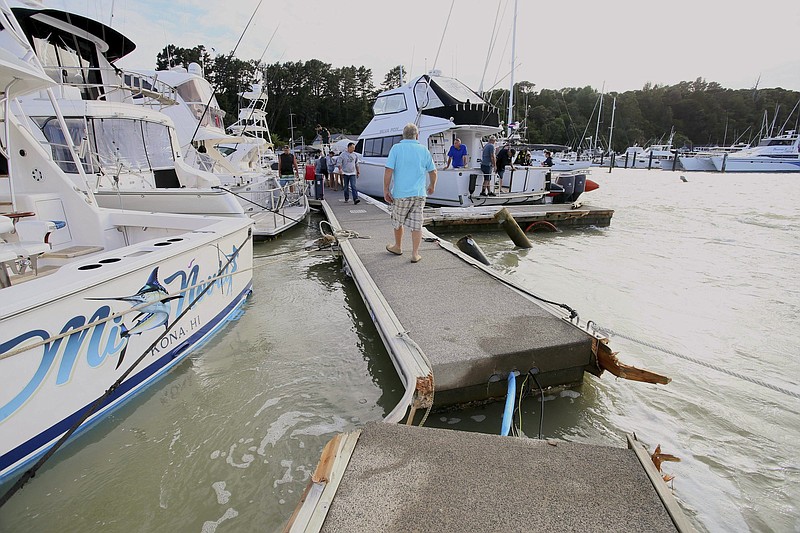 A dock is torn apart in a marina at Tutukaka, New Zealand, Sunday, Jan. 16, 2022, after waves from a volcano eruption swept into the marina. An undersea volcano erupted in spectacular fashion Saturday near the Pacific nation of Tonga, sending tsunami waves crashing across the shore and people rushing to higher ground. (Tanya White/Northern Advcate/NZME via AP)

WELLINGTON, New Zealand -- New Zealand's military on Sunday morning was able to send a surveillance flight to Tonga to assess the extent of the damage from a huge undersea volcanic eruption.

A towering ash cloud had prevented the military from launching any flights earlier to the Pacific island nation. Communications with the island nation remained limited after the internet was cut soon after the eruption on Saturday evening.

There were no reports of injuries or deaths, although concerns remained for the fate of people on some of the smaller islands near the volcano. Meanwhile, scientists said they didn't think the eruption would have a significant impact on the Earth's climate.

Huge volcanic eruptions can sometimes cause global cooling as sulfur dioxide is pumped into the stratosphere.

But in the case of the Tonga eruption, initial satellite measurements indicated the amount of sulfur dioxide released would only have a tiny effect of perhaps 0.02 Fahrenheit global average cooling, said Alan Robock, a professor at Rutgers University.

[Video not showing up above? Click here to watch » arkansasonline.com/117tonga/]

Satellite images showed the spectacular undersea eruption Saturday evening, with a plume of ash, steam and gas rising like a giant mushroom above the South Pacific waters.

A sonic boom could be heard as far away as Alaska and sent pressure shockwaves around the planet twice, altering atmospheric pressure that may have briefly helped clear out the fog in Seattle, according to the National Weather Service. Large waves were detected as far as the Caribbean due to pressure changes generated by the eruption.

In Tonga, it sent tsunami waves crashing across the shore and people rushing to higher ground. Government websites and other official sources remained without updates on Saturday afternoon.

New Zealand Prime Minister Jacinda Ardern said Sunday there had not yet been any official reports of injuries or deaths in Tonga, but cautioned that authorities hadn't yet made contact with some coastal areas and smaller islands.

"Communication with Tonga remains very limited. And I know that is causing a huge amount of anxiety for the Tongan community here," Ardern said.

She said there had been significant damage to boats and shops along the Tongan coastline. The capital, Nuku'alofa, was covered in a thick film of volcanic dust, Ardern said, contaminating water supplies and making fresh water a vital need.

One complicating factor to any international aid effort is that Tonga has so far managed to avoid any outbreaks of covid-19. Ardern said New Zealand's military staff were all fully vaccinated and willing to follow any protocols established by Tonga.

Dave Snider, the tsunami warning coordinator for the National Tsunami Warning Center in Palmer, Alaska, said it was very unusual for a volcanic eruption to affect an entire ocean basin, and the spectacle was both "humbling and scary."

The tsunami waves caused damage to boats as far away as New Zealand and Santa Cruz, Calif., but did not appear to cause any widespread damage. In northern Peru's Lambayeque region, two women drowned after being swept away by "abnormal waves" following the eruption, authorities said.

The U.S. Geological Survey estimated the eruption caused the equivalent of a magnitude 5.8 earthquake. Scientists said tsunamis generated by volcanoes rather than earthquakes are relatively rare.

U.S. Secretary of State Antony Blinken wrote on Twitter he is "deeply concerned for the people of Tonga as they recover from the aftermath of a volcanic eruption and tsunami. The United States stands prepared to provide support to our Pacific neighbors."

The explosion of the Hunga Tonga Hunga Ha'apai volcano, about 40 miles north of Nuku'alofa, was the latest in a series of dramatic eruptions.

Earth imaging company Planet Labs PBC had watched the island in recent days after a new volcanic vent began erupting in late December. Satellite images showed how drastically the volcano had shaped the area, creating a growing island off Tonga.

"The surface area of the island appears to have expanded by nearly 45% due to ashfall," Planet Labs reported days before the latest activity.

Experts say it's too early to tell how much ash was produced by the eruption because the volcanic cloud included vapor resulting from sea water interacting with the hot magma.

The ash cloud was drifting westward and aircrafts will be likely diverted around its periphery as a precaution, said Scott Bachmeier, a research meteorologist at the University of Wisconsin-Madison.