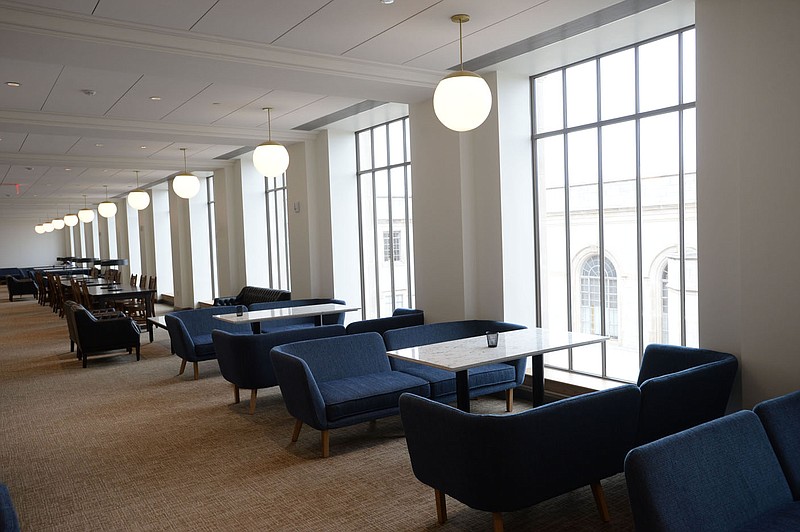 FAYETTEVILLE -- A newly opened $45.3 million, four-story building at the University of Arkansas, Fayetteville will serve as a hub for tutoring, advising and mentoring, officials said.

UA's new Student Success Center sits near the iconic Old Main academic building, with attention paid to the project's exterior and location as well as functional details -- think lots and lots of windows and a variety of seating -- to try to make it an appealing space for students.

Putting various support staff and programs in one location "seems to be a common trend on college campuses," Trevor Francis, the center's director and an associate vice provost, said in an email.

But the new UA building, with its specific combination of services, is "one-of-a-kind," at least among the 14 member schools of the Southeastern Conference, Francis said.

The layout includes space for food service, with a new dining option to open from10:30a.m. - 2p.m. during the week and a Starbucks scheduled to keep much longer hours, UA spokesman Mark Rushing said. The interior includes long, open stretches of comfy seating as well as some study tables.

The spot chosen for the new center required demolition of a building that housed UA's School of Social Work. If the new building resembles some others on campus, that's by design.

"The limestone was selected to match similar structures in the historic heart of campus," Rushing said in an email, referring to other campus buildings such as Memorial Hall and White Engineering Hall.

Portions of the limestone material came from Batesville, Rushing added.

Now, anyone approaching the front entrance of Old Main can glance to the right and see the work of Chicago-based HBRA Architects and Rogers-based Core Architects, designers of the new study hub. VCC, which is headquartered in Little Rock, served as construction manager for the approximately 71,000-square-foot project.

Rushing said the project's cost is being paid for in part by about $20.3 million from a bond issue. Another $10.1 million is being used by UA reserve funds, with fundraising efforts still ongoing to help cover other costs, Rushing said. The Walmart Foundation is providing a $5 million gift in support of the project.

Details of the design include a south main entrance that faces the Old Main lawn and is "defined by flanking chamfered turrets that refer to the design of other historic Collegiate Gothic buildings on campus," William Mahalko, a project architect with Chicago-based HBRA Architects, said in an email. Windows take up much of the space directly above the building's south doors.

Inside, a large service desk and open spaces are conspicuous upon walking into the building, which also features a skylight. The design was for a "central light well" to bring natural light "into the core of the building and provide a focus and point of orientation for the lobby and tutoring spaces," Mahalko said.

Going down to the terrace level, large windows stretch nearly from floor to ceiling to allow for more natural light. While the building has opened and will be available for students by Tuesday -- the first day of spring term classes -- work remains to be done on the outdoor courtyard area, Rushing said.

"The bluestone pavers that will surround the area will not be available until later this month. The outdoor furniture has also been delayed but is expected to arrive in April. Temporary solutions are being considered to potentially open the terrace sooner, but nothing definite yet," Rushing said.

Other building levels also have large open spaces for students to gather.

"A rough estimate would be that open tutoring/mentoring areas make up approximately 25% of the First and Second floors, which house most of the tutoring program (as opposed to traditional classroom, seminar rooms, office space and service areas)," Mahalko said.

The current coronavirus surge has the university placing a greater emphasis on its requirement that masks be worn indoors in academic and general purpose buildings, according to a message to campus from Interim Chancellor Charles Robinson.

Rushing said that the university offers a mix of virtual and in-person mentoring, tutoring and advising.

"Virtual tutoring and writing support appointments and live chat options have been offered to students for several years," he added.

The center has been built with an approach that ultimately should make it easier for students to know where to go to find the help they need, said Xochitl Delgado Solorzano, assistant dean for diversity, equity and inclusion at UA's Honors College.

"If a student feels uncomfortable on their own, we really can just walk them to where that office is and make that introduction ourselves," said Delgado Solorzano, who coordinates the First-Generation Mentoring Program, one of many types of mentoring programs offered.

Beginning Jan. 3, workers began moving into the building, Rushing said. This includes 68 full-time staff and faculty, as well as 12 graduate assistants. In addition, approximately 300 students will also work in various jobs at the center, Rushing said.

"The student programs that are housed in the new student success building were designed to help students succeed academically and to thrive through and beyond graduation," Francis said.

Rushing said that the building will house academic advising for undergraduates in UA's Fulbright College of Arts and Sciences as well as UA's College of Education and Health Professions.

"These advising teams will work together to support students who are changing majors between their colleges, double majors, and pre-health students. Additionally, there are common spaces and reservable rooms that all academic advisors can reserve or access for advising meetings," Rushing said.

Delgado Solorzano coordinates the First-Generation Mentoring Program that has about 50 to 60 students participating, she said. It has a focus on helping first- and second-year students -- regardless of whether they are in honors programs or UA's Honors College -- by pairing them with faculty mentors, she said.

Having a mentor "helps students build that sense of connection and belonging on a college campus," she said.

UA's Writing Studio program and tutoring services along with other types of coaching and advising "will all work together to help students succeed," Francis said.

But UA's graduation rate lags behind some large public universities in nearby states.

"The Student Success Center is one part of an ongoing campus-wide effort to increase the rates at which our students continue their studies and graduate. Graduation rates have gradually climbed over the past 10 years, and we expect those rates to continue to improve," Francis said.

Once the spring term begins Tuesday, the building will generally be open Sundays through Fridays this spring, Rushing said.