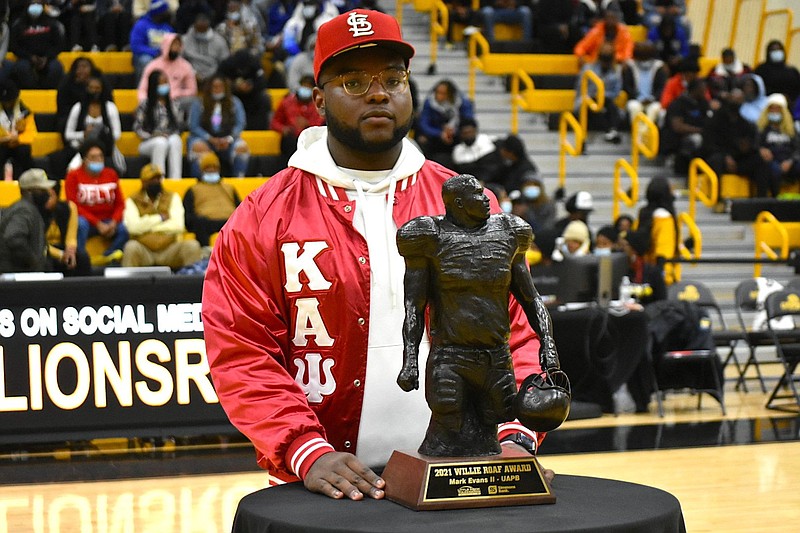 Evans, a 6-foot-4-inch, 295-pound junior from Houston, was presented the award during a private ceremony Friday at the DoubleTree Hotel in Little Rock. He celebrated the award with his fellow linemen and quarterback Skyler Perry.

“It was bigger than me,” Evans said of winning the honor. “To bring the award back to Pine Bluff, playing at an HBCU [historically Black college or university], it’s an honor in itself.” Roaf, a 1988 Pine Bluff High School graduate and 2012 inductee into the Pro Football Hall of Fame, awarded the trophy to Evans, as well as the high school Willie Roaf Award to Robinson’s E’Marion Harris.

Presented by the Little Rock Touchdown Club, the awards are typically part of an annual awards banquet presented by the chapter of the National Football Foundation, but that event was canceled due to a rise in covid-19 cases, according to a news release. Other awards from the LRTC are named after Cliff Harris, Dan Hampton, Darren McFadden and Harlon Hill.

Evans was named HBCU All-American for the second year in a row. Going into the season, he was ranked among the top 20 of HBCU players with NFL draft potential and landed one of UAPB’s first name-image-likeness deals for a student-athlete with restaurant chain Denny’s as a member of its All-Pancaker Team.

Evans confirmed he would return to the Golden Lions for his senior season and hope to improve on a 2-9 record after helping the team reach the Southwestern Athletic Conference championship in the spring.

“To me, we’re going to go out there and keep putting our best foot forward,” Evans said. “If I give up, everybody else is going to want to give up, and I don’t want to let that happen.” Harris, a 6-foot-7-inch, 350-pound early enrollee at the University of Arkansas, helped Robinson win the 4A state championship. The Senators have won 49 of 59 games in which Harris started.