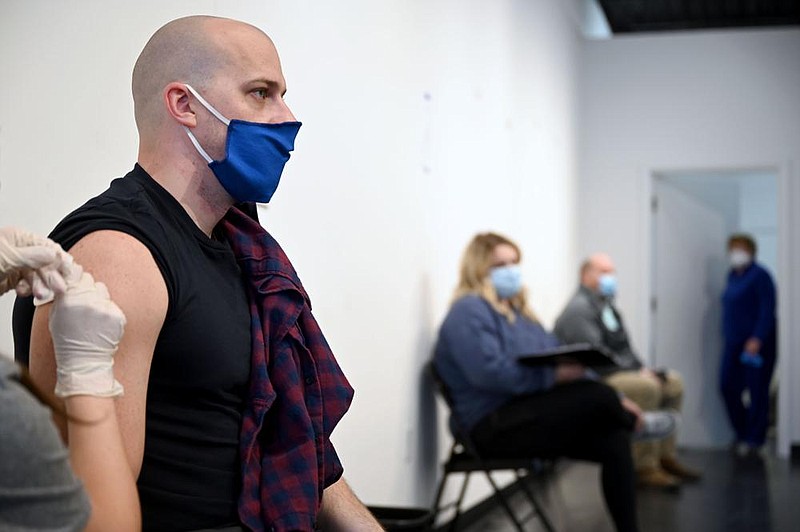 Arkansas hospitalizations because of covid-19 rose to 1,420 on Monday, the highest in five months, even as the day's report of new cases dipped to a three-week low.

"Today's report shows a decline in active cases, in part due to the lower testing numbers from the weekend," Gov. Asa Hutchinson said on social media Monday afternoon. "Hospitalizations continue to increase which means it is more important than ever to get your booster shot or your first dose."

Arkansas has had a cumulative tally of 684,776 cases since the pandemic began.

The state's death toll from the virus since March 2020, as tracked by the Health Department, rose by three to 9,437.

Testing for the virus was lower over the weekend compared with the rest of the week with 21,263 PCR and antigen tests reported Saturday, 14,164 on Sunday and 9,345 on Monday, for a total of 44,772. Monday was the Martin Luther King Jr. holiday, when many government offices were closed.

But the number was higher than the previous weekend, Jan. 8 through Jan. 10, when a total of 41,810 tests were reported.

Last week, the state had received about about 1.4 million of the 1.5 million rapid at-home tests that were purchased last month. The tests were distributed to local health units around the state as well as libraries and other community organizations to give out free of charge to state residents.

Another shipment of about 100,000 tests is expected this week, Health Department spokeswoman Meg Mirivel said Monday.

"We do not yet have a count of how many have been distributed, but we hope to have that information in the coming days," Mirivel said.

The daily case numbers will not be completely accurate since reporting the at-home test results is optional.

"If people want to report, they certainly can, but we don't expect to capture all at-home tests," Mirivel said.

Ashley Bhadra, a married mother of three from Cabot, said she quickly made her way to the local Goodwill store when an employee posted on Facebook that the store had 2,000 kits to give out.

"With covid numbers being so high, I wanted to keep a few on hand to test if needed," Bhadra said.

Jennifer Weaver, a married mother in White Hall, said that earlier this month she spent $60 at a pharmacist for two test packs.

"We were traveling in Florida for a conference at Disney World for children's pastors. With an increase in cases, we wanted to make sure it would be safe after traveling to be around other family members," she said.

Both Weaver and her husband are fully vaccinated and boosted, but they have a 4-year-old daughter with chronic lung issues. Weaver said she's going to get some of the free tests to keep in stock just for extra caution.

"We have been super careful as a family since March 2020," Weaver said. The first case of covid-19 was identified in Arkansas that month.

Dannatt Bechhoefer, a Bald Knob married mother of seven who also has a foreign exchange student and elderly parents who live with her, said she bought at-home tests and used them around Christmastime. She hasn't found the free ones yet.

"I've been told some will be available at the Health Department tomorrow," she said.

Bechhoefer said her son's girlfriend came over this weekend with a fever and a headache.

"We couldn't find anywhere to take her to get a test or to get an at-home test. She lives with her grandma and was afraid she would get her sick," Bechhoefer said. "We finally found a friend who gave us one and she was negative. Now I want to have them on hand because getting a test when you're sick is hard to do."

John Lowe said he tried to get the at-home tests on Monday, but was disappointed to find the Carroll County Health Department closed.

Buckalew of Dover said he works 8 a.m. to 5 p.m. daily in Clarksville.

"Not a single location I called last week had tests," he said. "Dover library distributes only from 9 to 11. One would have to be off work on the day of a new shipment and lucky to arrive early."

"There was no waiting," she said.

Barbara Mitchell said she was in and out of the Boone County Health Department in "20 seconds."

"And half of that was because I'm too short for the temperature thingy and I had to stand on my tiptoes," she said.

Anne Thomas said she went to the Sebastian County Health Department two days last week and picked up tests both days without any problems.

Kathy Pillow-Price said she picked some up at Fayetteville Public Library's drive-thru window.

Matt Wagner said he walked into the Washington County Health Unit on Friday and "walked out five minutes later with one for each family member."

Debbie Watson said employees with the Pope County Health Department were seated outside handing them out.

In answer to a question from the Arkansas Democrat-Gazette on Twitter on Monday, David Couch said there was a steady stream of people at the Pulaski County Health Department on Eighth and Cedar streets recently, but no line.

"Walked in first set of doors -- nice man there with boxes of tests," Couch said. "Asked how many in family -- told him -- he gave me my tests -- thanked him -- he said be careful. Turned around and left."

Nicole Chandler agreed and said it was the same quick service at the Pulaski County Health unit in southwest Little Rock.

"Both locations were prepared at the door," she said.

The number of people in hospitals in Arkansas rose by 35 to 1,420, the Health Department reported Monday. Ventilator usage increased by four to 172.

The figure surpassed the hospital's previous high of 104 set during the first wave of the pandemic in 2020.

On Monday, St. Bernards had 107 covid-19 patients including 23 in the intensive care unit with nine on a ventilator.

"In the past week, we have seen eight patients succumb to the virus," Nail said, adding that the hospital's greatest capacity concerns lie in its medical surgical area where the majority of covid-19 hospital admissions go.

"We do appreciate the State of Arkansas helping us expand capacity by 21 beds because we expect to see more hospitalizations over the next few weeks," Nail said.

"Omicron has more than doubled our covid hospitalizations in the past month. Its high transmissible qualities have also led to a high number of community breakthrough infections, even among our staff," Nail said. "Consequently, we're caring for a greater number of patients without 5% to 6% of our team. Many departments have temporarily sidelined their duties to help alleviate shortages and additional needs, because fighting covid is our top priority at the moment."

The University of Arkansas for Medical Sciences Medical Center put out the call recently for community volunteers as part of its "All Hands on Deck" program.

"We are asking employees who are able to volunteer to help in clinical areas where we are short-staffed because of the pandemic," UAMS spokeswoman Leslie Taylor said. "We launched last October and the response has been good."

There are a variety of jobs employees can volunteer for including as health screeners.

"Everyone who enters our buildings has to pass a health screening and this includes our 11,000 employees," Taylor said.

Employees have also been asked to help the nursing staff by answering phones or call lights on patient care units while others have volunteered to help with patient food tray deliveries or transporting patients.

"We are so grateful to those employees who are volunteering their time to help during the pandemic. Many of these employees are helping out in addition to their regular jobs and that speaks to the giving spirit of Team UAMS," Taylor said. "A hospital is a 24/7 operation and working together we will get through this public health crisis."

On Monday, UAMS had 72 covid-19 patients including 10 in the ICU and six on ventilators. About 31 of those patients are fully vaccinated, Taylor said.

About 600 patients registered for the hospital's drive-thru testing facility in Little Rock, which closed at 3:30 Monday for the holiday.

"The last two weeks, we have been averaging about 800 patients a day through that facility and 1,100-1,200 statewide," Taylor said.

On Monday, 643 UAMS employees were not cleared to work and 335 of those were positive for covid-19, down slightly from last week, Taylor said.

Baptist Health spokeswoman Cara Wade said in an email that the hospital system continues to see a daily increase in covid-19 hospitalizations, with 294 patients on Monday, including 81 in intensive care and 44 on ventilators.

"This is the closest we've been in months to reaching 300 (August 2021) -- our largest COVID census since the pandemic began," Wade said.

The demand for covid-19 testing remains high, Wade said. At the Baptist Health Medical Center-Little Rock drive-thru testing site, 757 were tested Saturday and 653 on Sunday with reduced hours because of the weather.

The impact of the current covid-19 surge is being felt not only in their patients, but also in the Baptist-Health employees, Wade said.

"Whether it's burdens placed on parents with schools going virtual, exposures to the virus, or employees testing positive for COVID-19, the challenges we're seeing are impacting our ability to staff in a normal way," Wade said. "We are certainly not dealing with anything normal right now. We are trying to make sure that employees check on each other and we continually remind our staff of the resources we have available to them."

The number of vaccine doses that providers reported having administered rose by 1,896 to 3,820,471.

As of Monday, 491,384 third vaccine doses had been administered.

Pulaski County had the most new cases with 755 Monday, followed by Faulkner County with 229 and Craighead County with 212.