People 60 and up who fail to get shots face monthly penalty by Compiled Democrat-Gazette Staff From Wire Reports | January 18, 2022 at 3:27 a.m. 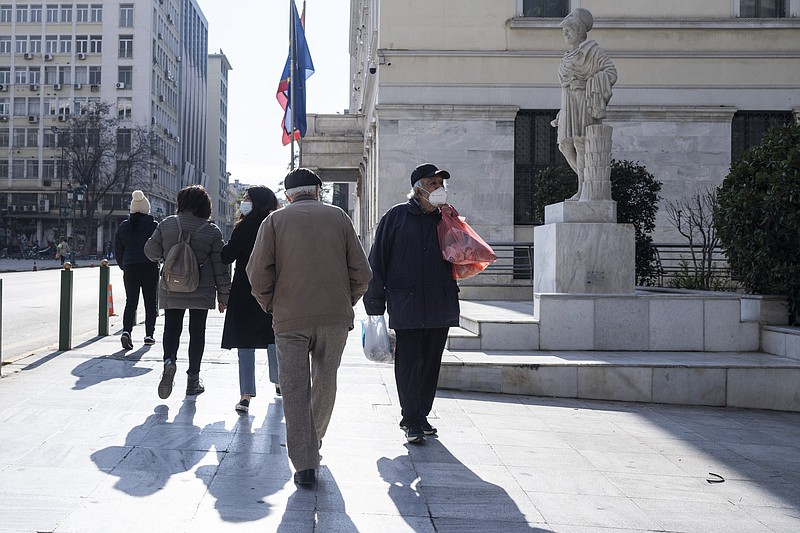 An elderly man wearing a face mask to curb the spread of coronavirus, walks past Athens' municipality building and in front of the statue of the ancient statesman Pericles of Athens' Golden Age, on Monday, Jan. 17, 2022. Greece has imposed a vaccination mandate for people over age 60, as coverage remains below the European Union average and while a recent spike in infections has sustained pressure on hospitals. (AP Photo/Petros Giannakouris)

ATHENS, Greece -- Greece imposed a vaccination mandate Monday for people 60 and older as a spike in infections has put sustained pressure on hospitals, where most of the seriously ill patients belong to that age group.

Older people failing to get vaccinated will face penalties starting at a 50-euro ($57) fine in January and followed by a monthly fine double that.

[Video not showing up above? Click here to watch » arkansasonline.com/118greece/]

About 69% of Greece's 10.7 million people are fully vaccinated, just under the EU average of 70.3%. Covid-19 deaths and daily hospitalizations in Greece have increased following the arrival of the omicron variant, although the overwhelming majority of people in the hospital or dying have the delta variant.

Pressure on ICU capacity has eased slightly. New infections surged sharply in early January but have eased over the past week.

Health Minister Thanos Plevris said the fines would be collected through the tax office, with the money going to help fund state hospitals.

"The age factor is important because of its impact on the public health service," Plevris said Sunday.

Greece imposed a vaccination mandate for health care workers last year. And starting Feb. 1, vaccination certificates for adults will expire after seven months unless the holder gets a booster shot.

The vaccination mandate for older people was announced in late December and, according to government data, 41.5% of the 530,000 targeted people are now fully vaccinated.

Polls suggest strong public support for the mandate, but some lawmakers across party lines have questioned the legality of singling out a group. The government defended the measure as constitutional, citing a 2020 high court decision allowing public day care centers to refuse children who had not been vaccinated for childhood illnesses.

NO SHOTS, NO RIDE

In the Philippines, people who are not fully vaccinated were banned from riding public transport in the Manila region Monday in a move that has sparked protests from labor and human rights groups.

The Philippines's vaccination campaign has been dogged by public hesitancy and delays, while omicron has fueled a recent spike in infections. From less than a thousand new cases daily during the Christmas holidays, the Department of Health counted a record of more than 39,000 on Saturday.

Under the Department of Transportation's "no vax, no ride" policy, commuters who are not fully vaccinated will not be allowed to ride public jeepneys, taxis, buses, sea ferries or commercial planes to and from or within metropolitan Manila unless they show proof that they are on urgent errands or cannot be vaccinated for medical reasons.

The restriction will last at least to the end of January and was an offshoot of President Rodrigo Duterte's warning that unvaccinated Filipinos who defy orders to stay at home could face arrest.

"There are indeed legitimate reasons for aiming to vaccinate as many people as possible. However, these reasons should not prevent people from freedom of movement," said Butch Olano of Amnesty International in the Philippines. Experts say the policy's legality could be questioned before the Supreme Court.

Chief Public Attorney Persida Acosta said the measure discriminates against unvaccinated people in violation of the equal protection principle of the law and added there was no law making vaccination mandatory.

"This requirement for vaccine cards is not in the law, so it's contrary to the constitution," she said, adding that the measure was "really anti-poor" and could hurt those who earn a low income.

There were concerns how poor drivers of jeepneys, Manila's popular public transport mode, could efficiently enforce the restriction and check vaccination certificates while driving with passengers constantly getting on and off. Police warned that commuters who show fake proofs of vaccination could be fined or jailed.

More than 54 million of about 109 million Filipinos have been fully vaccinated.

The Philippines has confirmed more than 3.1 million infections, with 52,858 deaths, among the most in Southeast Asia.

Austria will impose fines on those without vaccinations starting in mid-March after a transition phase beginning in February, Chancellor Karl Nehammer said.

People unwilling to get inoculated will face penalties of as much as 3,600 euros ($4,108), he told reporters Sunday. The mandate will apply to all adults living in the country except when a medical exemption is granted.

In the first phase of the policy, the unvaccinated will get written notification. Starting in March, police and other officials will start checking vaccine status, imposing fines and ordering vaccine appointments if necessary. Continued dissent will prompt another 600-euro ($684) fine after a month.

Fines could be reversed by taking a vaccine within two weeks of being identified.

More than 20,000 people marched in the streets of Vienna on Saturday in the latest protest against the plan, which has become a key campaign theme for the right-wing Freedom Party. The government also received more than 100,000 comments, many from those opposed to mandates, during a public consultation for the bill.

Information for this article was contributed by Derek Gatopoulos and additional staff members of The Associated Press; and by Marton Eder of Bloomberg News (TNS). 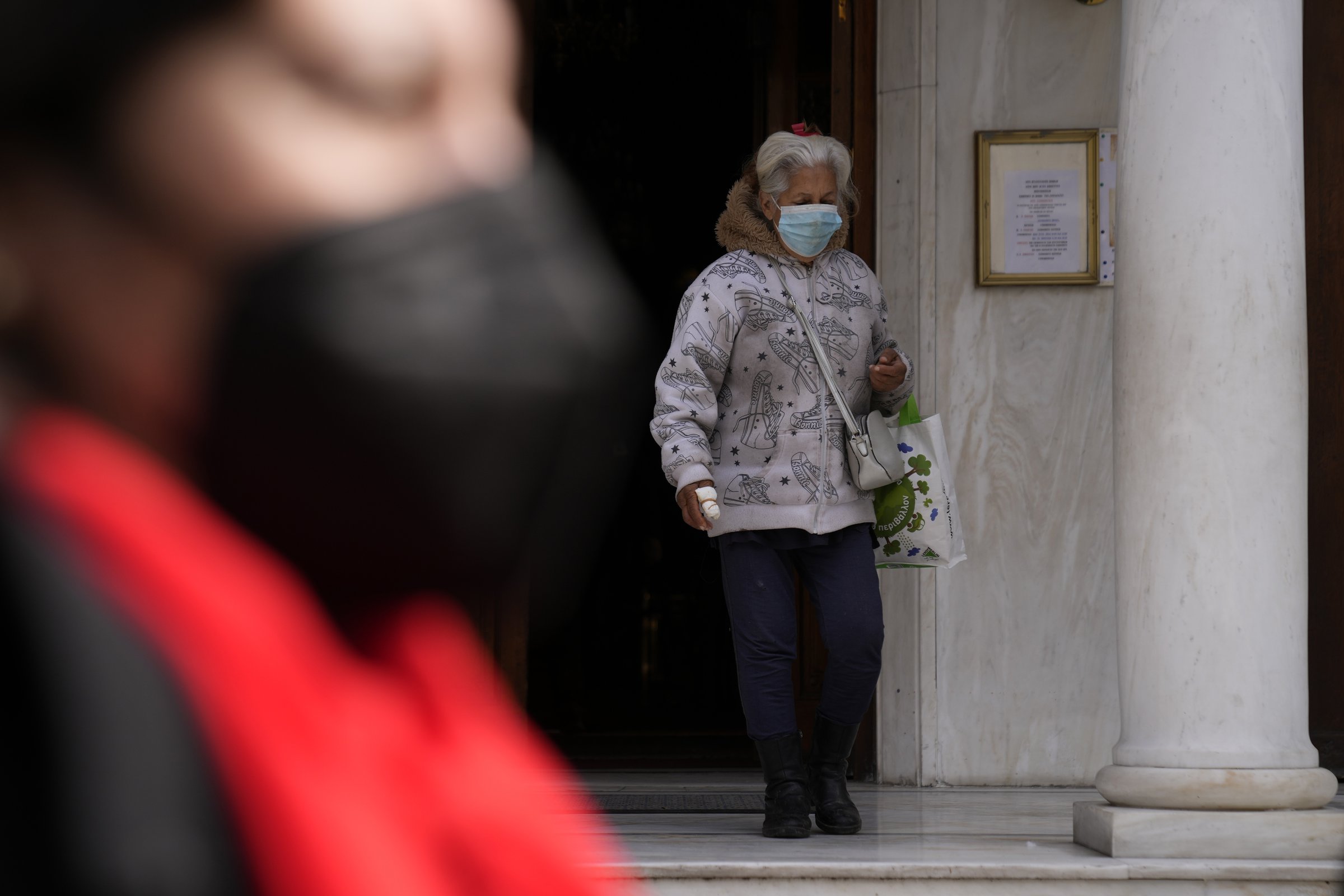 A woman wearing a face mask to curb the spread of coronavirus, exits from a Greek Orthodox church in Athens, Greece, Monday, Jan. 17, 2022. Greece has imposed a vaccination mandate for people over age 60, as coverage remains below the European Union average and while a recent spike in infections has sustained pressure on hospitals. (AP Photo/Thanassis Stavrakis)