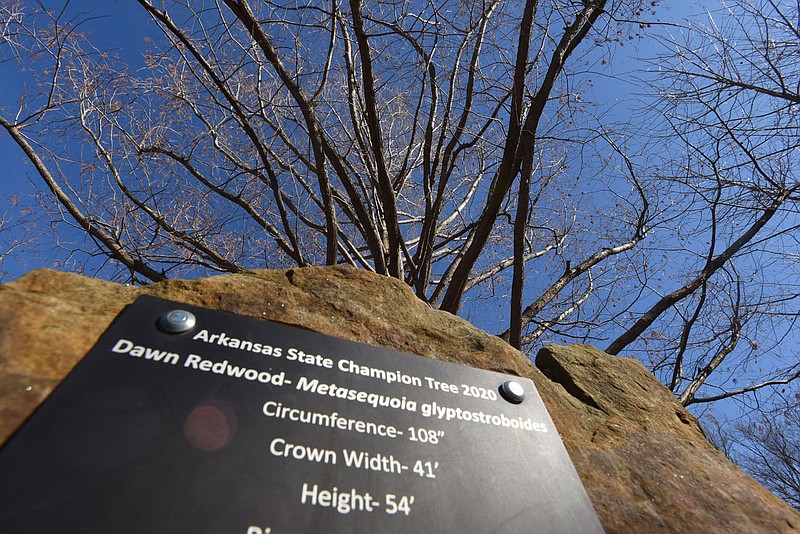 This dawn redwood tree, seen on Friday Dec. 31 2021, is one of two champion trees at Wilson Park in Fayetteville. The champion persimmon also stands tall at the park. (NWA Democrat-Gazette/Flip Putthoff)

Visitors to parks and other public spaces around Arkansas can bask in the shade of the state's largest trees.

Champion trees, these are called, and they're the largest of their species as recognized by the Arkansas Forestry Commission. Some are on private land, but many are on public property for all to admire.

Northwest Arkansas has its share of champions on public land. Wilson Park in Fayetteville has two champion trees. A dawn redwood champion tree stands tall near the castle art sculpture at the northeast corner of the park. The champion persimmon tree is close to a walking trail on the park's southwest section.

The dawn redwood is 54 feet tall, while the persimmon is 69 feet. But tall isn't the only factor foresters consider when measuring a potential champion. Crown spread and trunk circumference measurements are also taken. They're all plugged into a formula to determine a "bigness index" for the tree.

Most champions get the designation when a person contacts the forestry commission and nominates a tree. If it measures up, it's a champion. The Wilson Park dawn redwood was designated a champion in January 2020 and the persimmon in October 2019.

The hotbed of Northwest Arkansas champion trees is Compton Gardens near downtown Bentonville. Four champions and a co-champion can be seen on the garden's 6 acres. American chestnut hybrid, pagoda dogwood, yellowwood and bitternut hickory are the champions at Compton Gardens. Green ash is the co-champion.

Compton Gardens is the home of the late Dr. Neil Compton, a Bentonville physician who is well known as a leader in the fight to prevent dams from being built on the Buffalo River. The efforts of The Ozark Society, which Compton founded, eventually led to the stream being named the nation's first national river, Buffalo National River.

People are welcome to see these trees along trails at Compton Gardens on the north side of downtown Bentonville.

It's unusual that four champions and a co-champion grow on a 6-acre site, said Amy Lyman, forestry spokesperson.

"While it is not uncommon to find four or five champion trees within one county, it is rare to have so many champion trees in a 6-acre area," Lyman said via email. "In this case, Dr. Compton regularly planted species of trees and plants not necessarily found in Arkansas. American chestnut, for example, is not native to Arkansas.

"Current guidelines dictate that only native or non-native naturalized species are eligible to be named as champions. Therefore, if the American chestnut at Compton Gardens dies or is removed, there will not be a replacement champion tree crowned for that species."

Crystal Bridges Museum of American Art, practically next door to Compton Gardens, formerly had two champion trees but now has one, Lyman added. A new black gum tree was designated elsewhere as a champion in 2021. Crystal Bridges still has one champion, an eastern white pine.

Some 20 to 25 nominations are received each year. Foresters conduct on-site examinations of all nominations. Fourteen new champion trees were designated in 2021, Lyman said. Landowners and land managers don't always remove a champion tree's plaque or signage when a new champion of that species is crowned. A current list of champion trees is kept at www.agriculture.arkansas.gov.

Champion trees aren't all big. For example, a champion dogwood is much smaller than the largest of all state champions, a bald cypress in Arkansas County. That giant is 126 feet tall with a trunk circumference of 43 feet, 7 inches. It's believed to be 800 years old.

It too is on public land at the White River National Wildlife Refuge. It can be seen on a 2.8-mile out and back hike. The trail may be wet and muddy.

A journey to see that grand cypress would make a fine road trip; if not, there are plenty of champions to see in our neck of the woods. 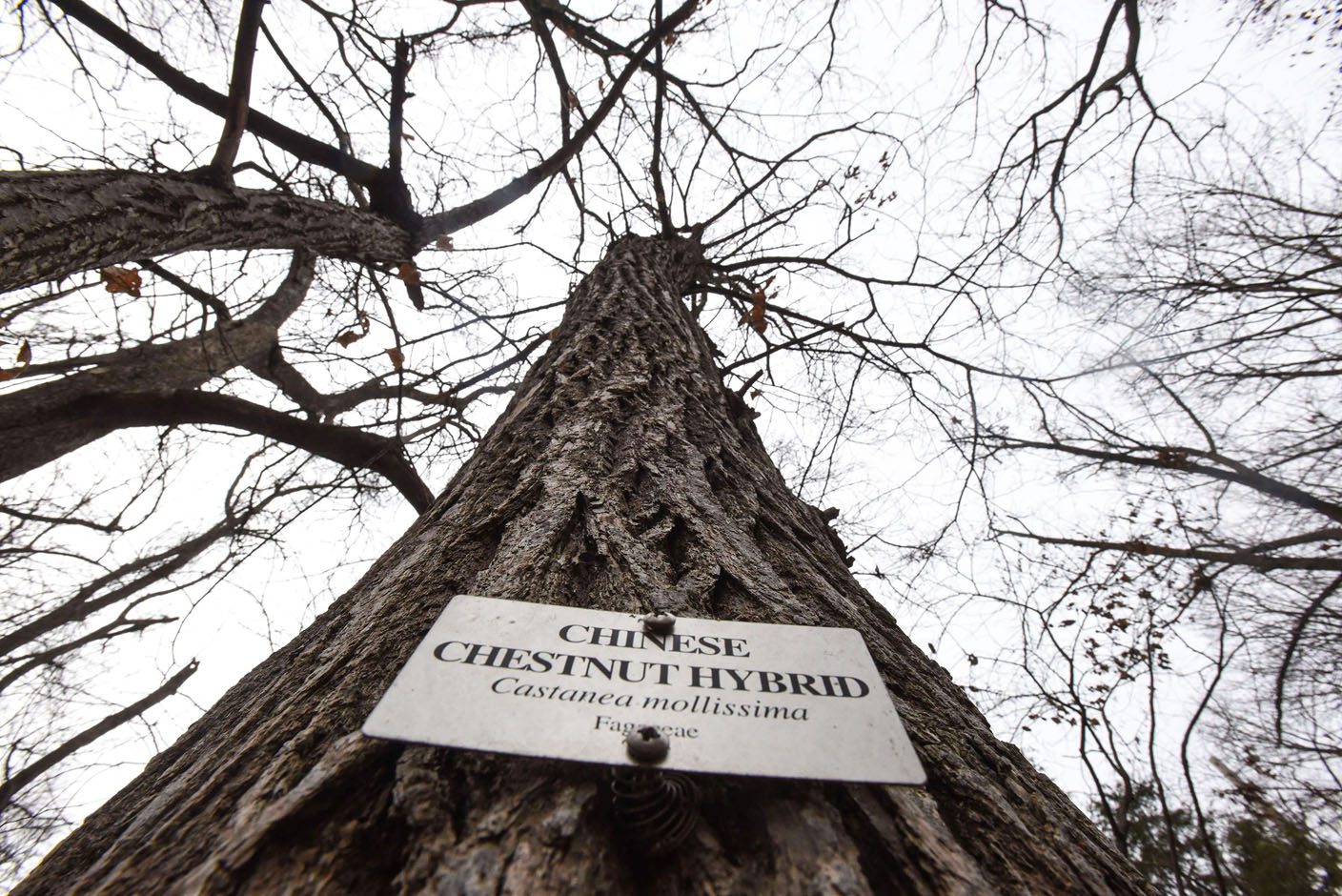 A Chinese chestnut hybrid is one of five champion trees visitors can see at Compton Gardens near downtown Bentonville. (NWA Democrat-Gazette/Flip Putthoff) 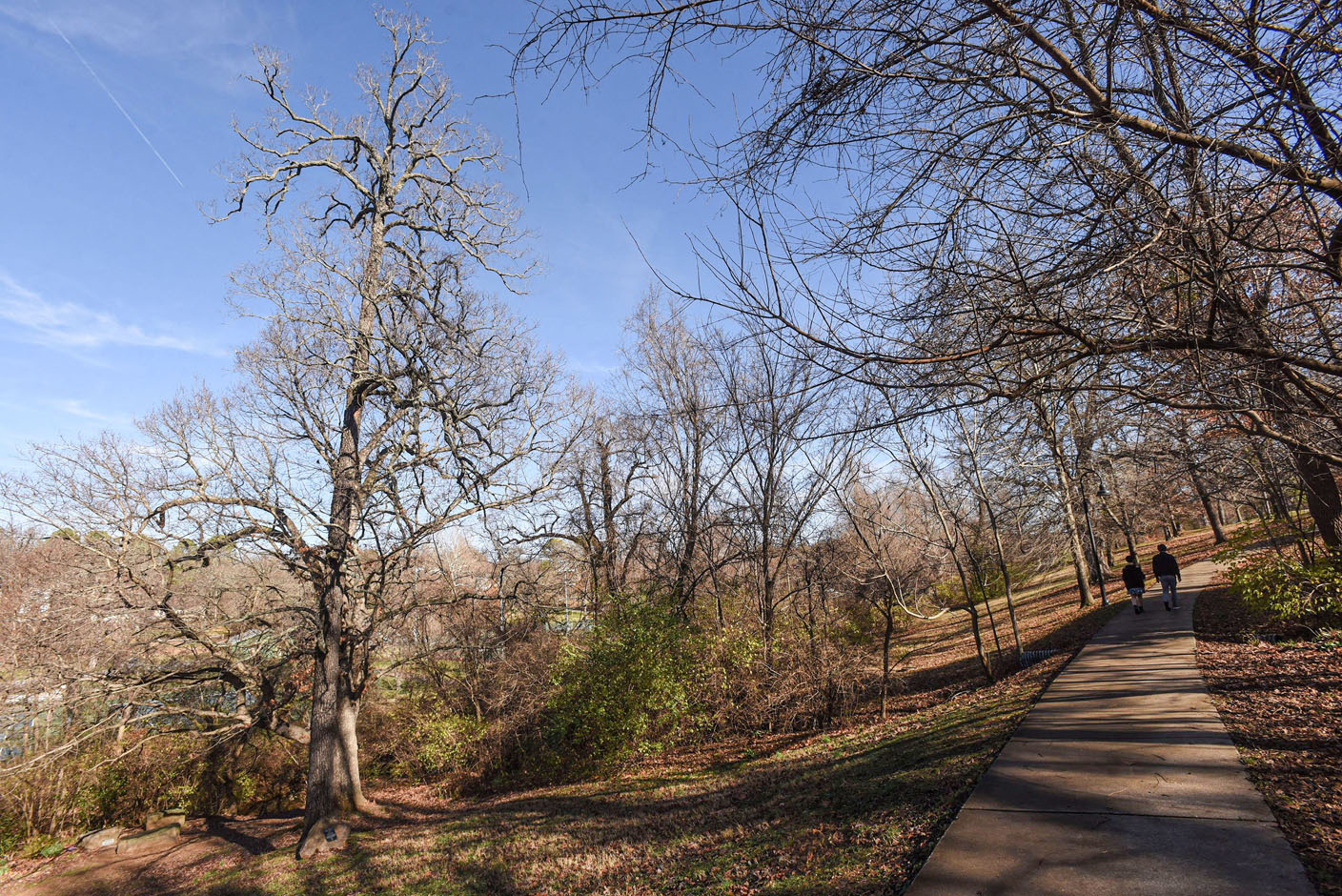 The champion persimmon tree (left) is along a walking trail at Wilson Park in Fayetteville. (NWA Democrat-Gazette/Flip Putthoff) 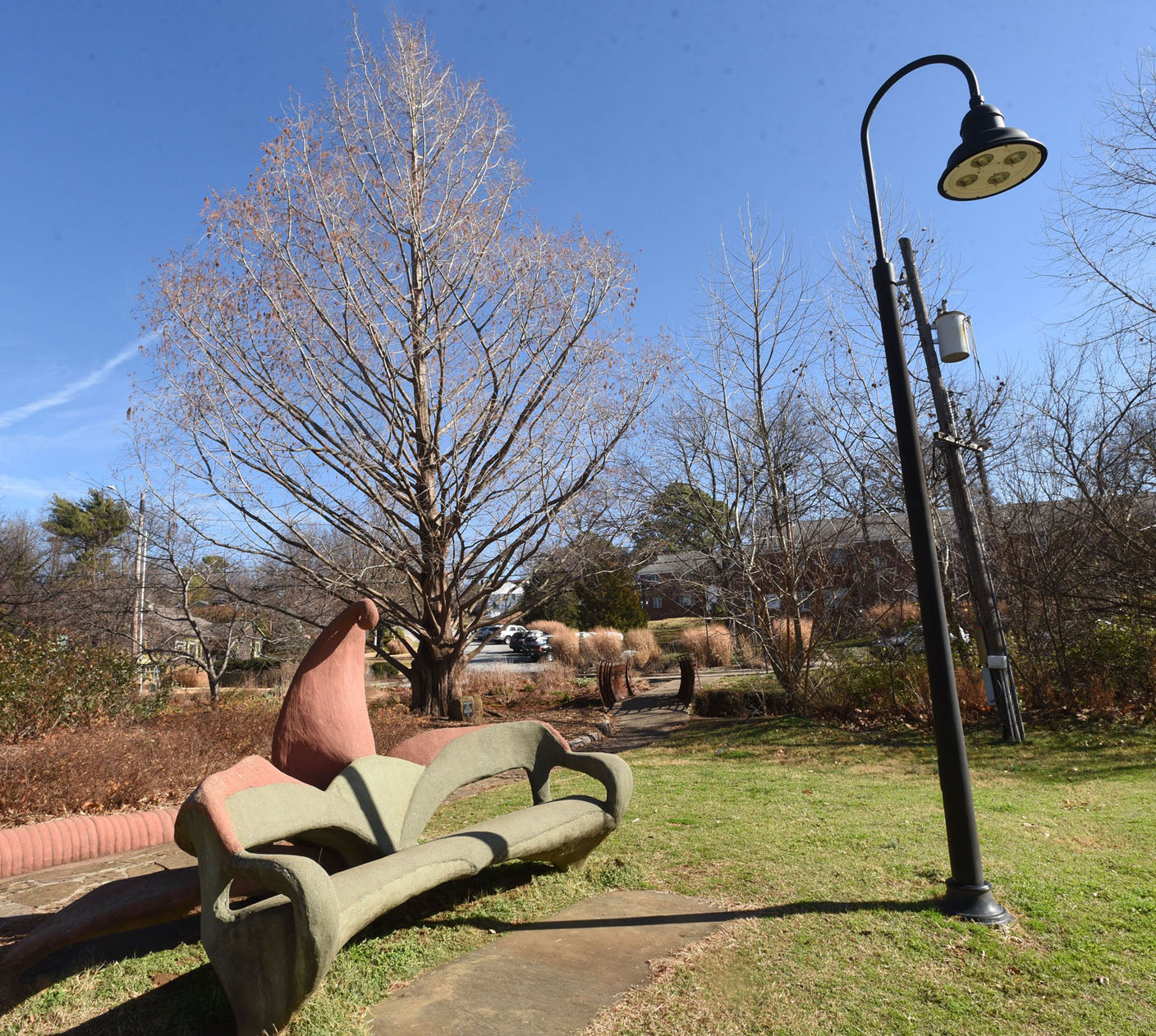 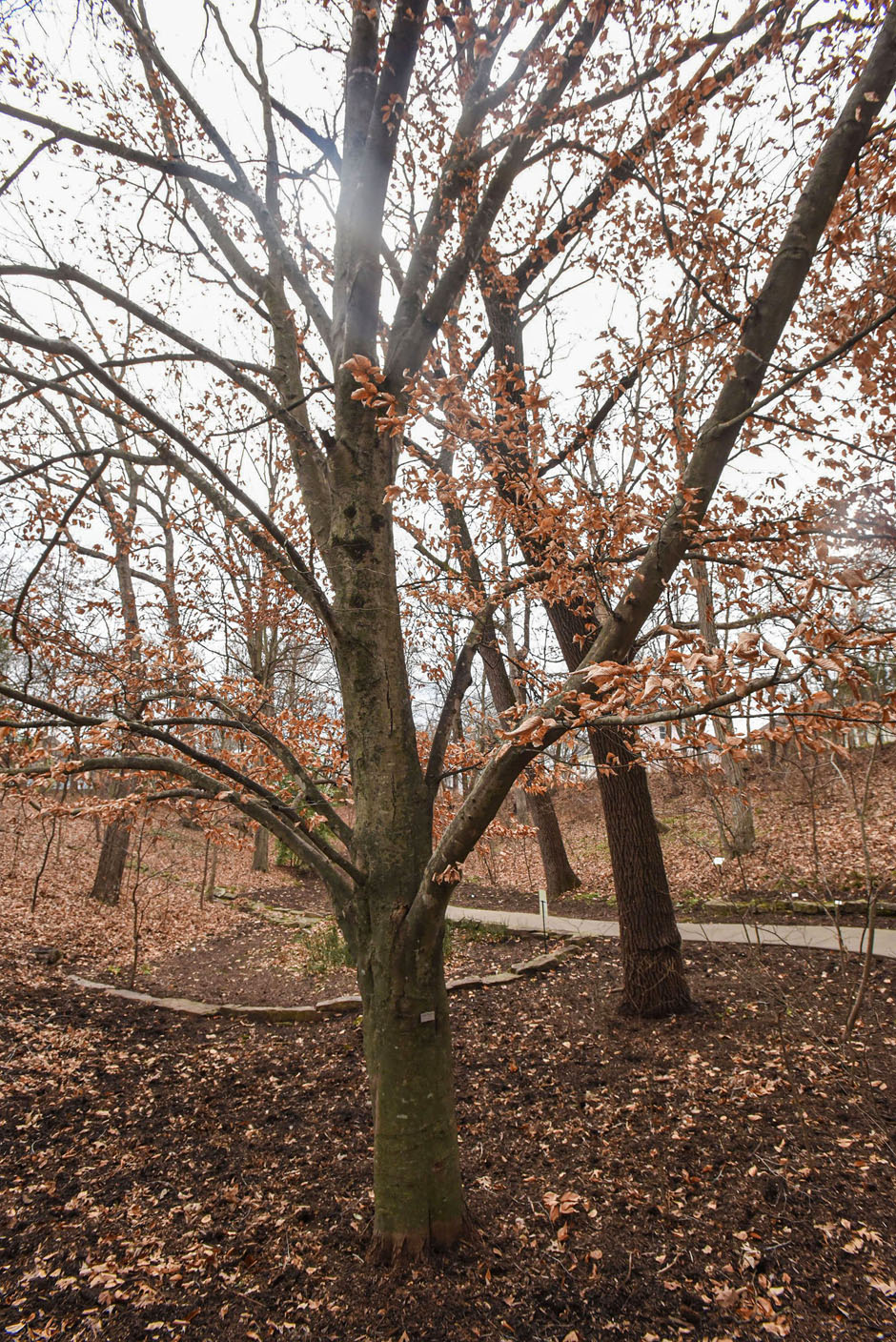 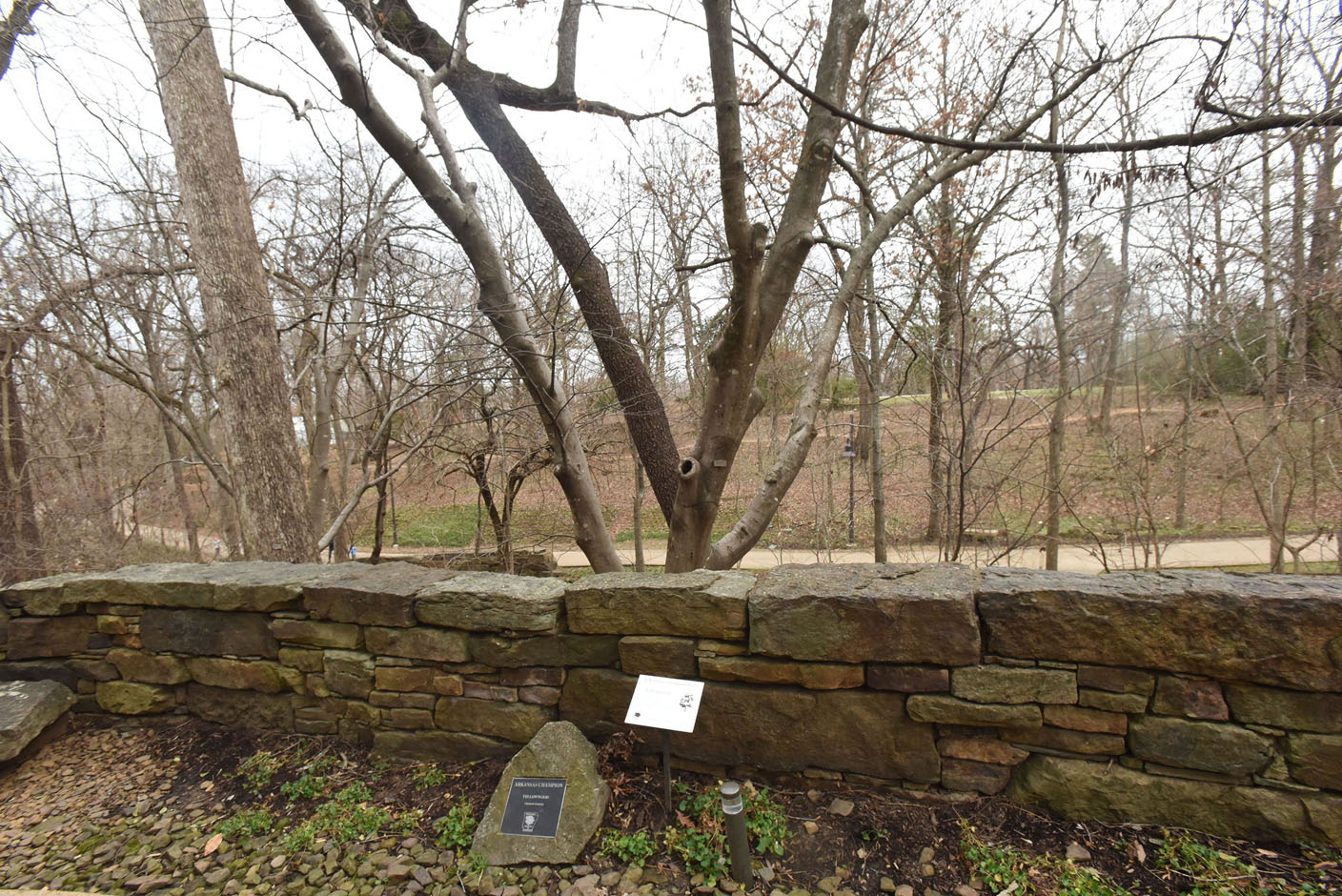 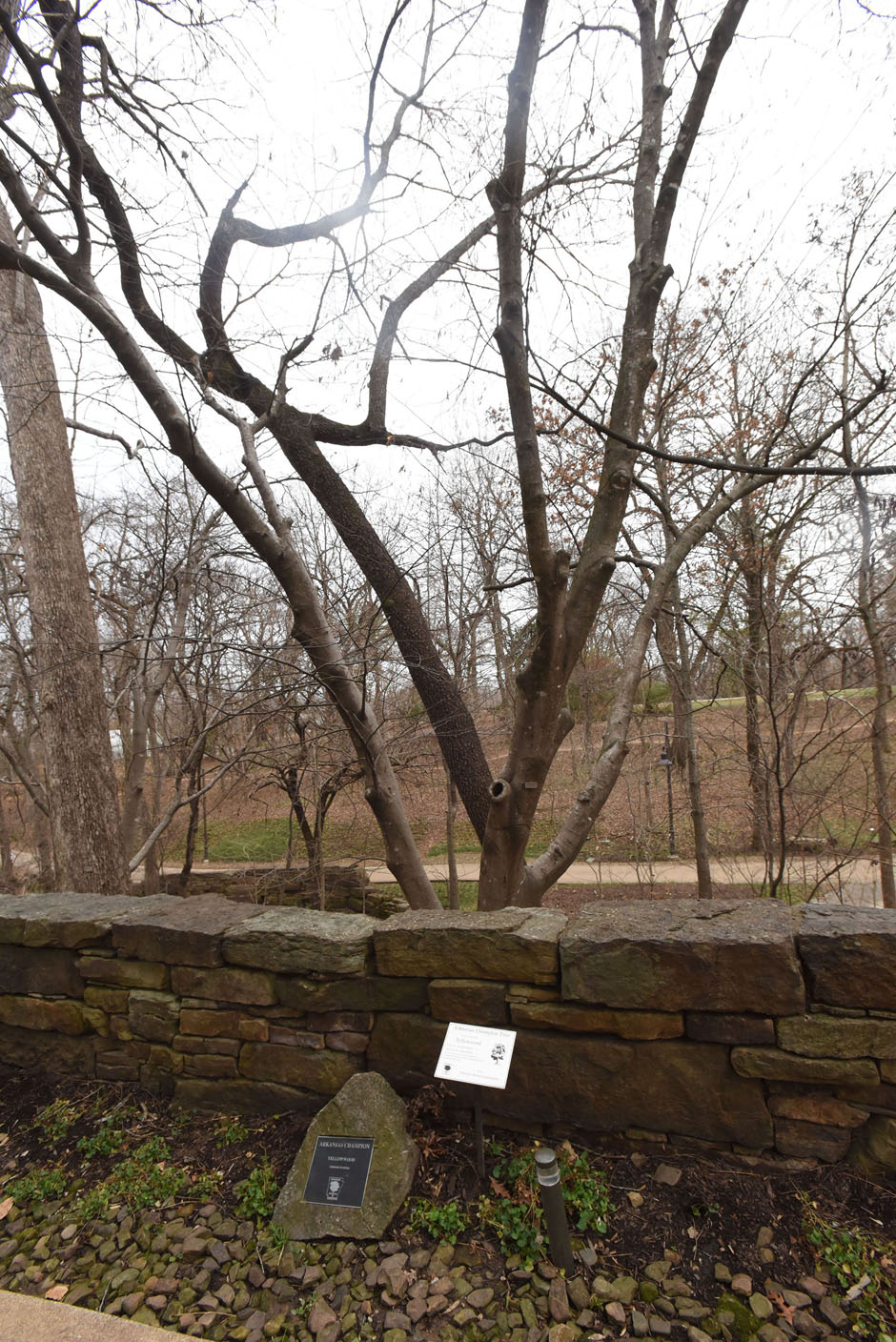 To nominate a possible champion tree, call an office of the Arkansas Forestry Commission, a division of the Department of Agriculture. Email questions about champion trees to harold.fisher@agriculture.arkansas.gov