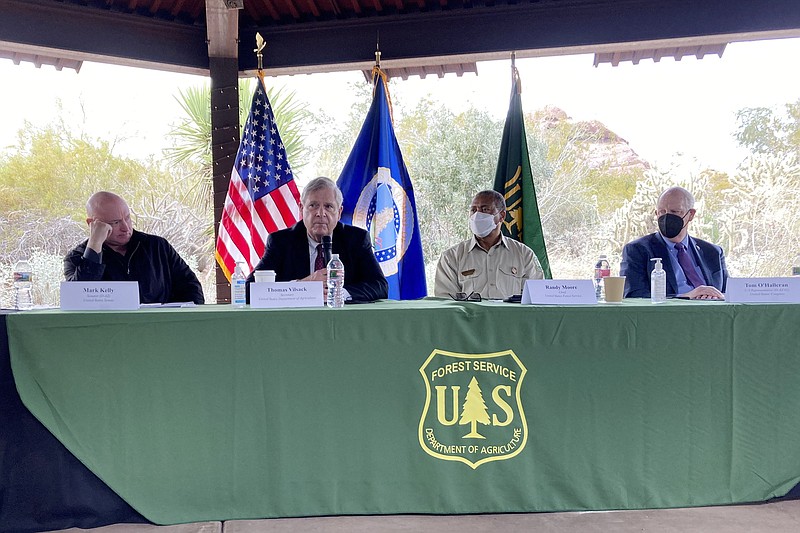 BILLINGS, Mont. -- The Biden administration said Tuesday it will significantly expand efforts to stave off catastrophic wildfires that have torched areas of the U.S. West by more aggressively thinning forests around "hot spots" where nature and neighborhoods collide.

As climate change heats up and dries out the West, administration officials said they have crafted a $50 billion plan to more than double the use of controlled fires and logging to reduce trees and other vegetation that serves as tinder in the most at-risk areas. Only some of the work has funding so far.

Projects will begin this year, and the plan will focus on regions where out-of-control blazes have wiped out neighborhoods and sometimes entire communities -- including California's Sierra Nevada mountains, the east side of the Rocky Mountains in Colorado, and portions of Arizona, Oregon and Washington state. Homes keep getting built in fire-prone areas, even as conditions that stoke blazes get worse.

"You're going to have forest fires. The question is how catastrophic do those fires have to be," Agriculture Secretary Tom Vilsack said. "The time to act is now if we want to ultimately over time change the trajectory of these fires."

Specific projects weren't immediately released, and it's not clear who would pay for the full scope of work envisioned across almost 80,000 square miles -- an area almost as large as Idaho. Much of that area is controlled by states or tribes or is privately owned.

Reaching that goal would require an estimated $20 billion over 10 years for work on national forests and $30 billion for work on other federal, state, tribal and private lands, said Vilsack spokesperson Kate Waters.

Vilsack acknowledged that the effort will also require a "paradigm shift" in the U.S. Forest Service, from an agency devoted to stamping out fires into one that uses what some American Indians call "good fire" on forests and rangeland to prevent even larger blazes.

Forest Service planning documents indicate the work will focus on hot spots that make up only 10% of the fire-prone areas across the U.S. but account for 80% of risk to communities because of their population densities and locations.

The recently passed federal infrastructure bill put a down payment on the initiative -- about $3 billion over five years that Vilsack said will get work going quickly.

Wildfire expert John Abatzoglou said lessening fire dangers on the amount of land envisioned under the administration's plan is a "lofty goal" that represents even more acreage than burned over the past 10 years across the West. But Abatzoglou, a University of California Merced engineering professor, said the focus on wildfire hazards closest to communities makes sense.

"Our scorecard for fire should be about lives saved rather than acres that didn't burn," he said.

Vilsack joined Forest Service Chief Randy Moore to announce the plan at an event in Phoenix where he defended its scope as realistic.

Dealing with western wildfires is becoming increasingly urgent as they get more destructive and intense. There have been rare winter blazes in recent weeks, including infernos in Montana and Colorado, where a wildfire Dec. 30 tore through a suburban area and destroyed more than 1,000 buildings, leaving one person dead and a second still missing.

And there's no signs of a let-up in conditions that keep the risk of wildfires extremely high. A long-term "megadrought" is gripping the region and scientists forecast temperatures will keep rising as more climate-changing carbon emissions are pumped into the atmosphere.

The impact stretches far beyond the western U.S. because massive smoke plumes at the height of wildfire season in the U.S. and Canada spread the health effects across North America -- sending unhealthy pollution last summer to major cities from San Francisco to Philadelphia and Toronto.

For decades, the primary approach to containing and extinguishing forest fires was to try to stamp them out. The efforts have been similar to massive, military-like campaigns, including planes, fleets of heavy equipment and thousands of firefighting personnel and support workers dispatched to the fire zones.

However, fires are part of the natural cycle for most forests, so putting them out leaves stands of trees that don't burn surrounded by dead wood, underbrush and other highly flammable fuels -- a worst-case scenario when blazes ignite.