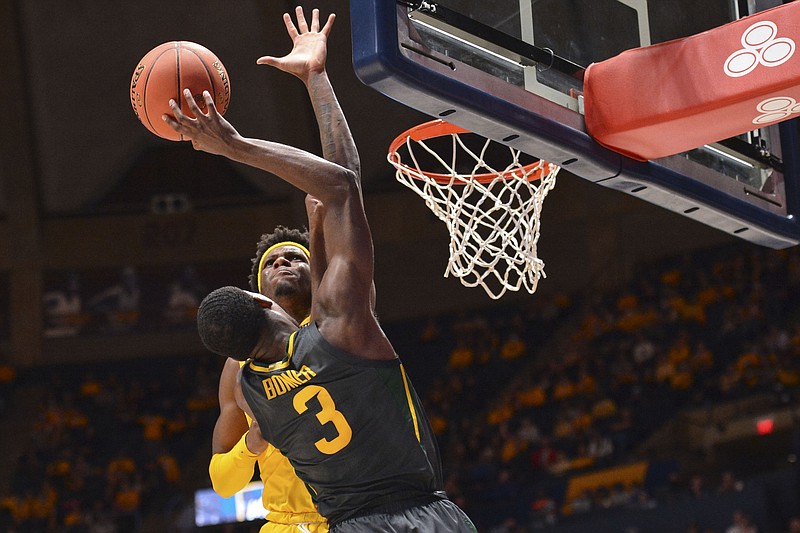 MORGANTOWN, W.Va. -- LJ Cryer scored a career-high 25 points in his second start of the season, and No. 5 Baylor snapped a two-game losing streak with a 77-68 victory over West Virginia on Tuesday night.

Baylor (16-2, 4-2 Big 12) bounced back after losing twice at home and relinquishing the No. 1 ranking. The defending national champion has won 13 straight away from home, including four consecutive true road games.

Cryer started in place of Bears leading scorer James Akinjo, who sat out with a bruised tailbone sustained in Saturday's loss to Oklahoma State.

"This league is one of those leagues you don't want to be on a losing streak, because nobody feels sorry for you," Baylor Coach Scott Drew said. "You can pick any sport. You lose, you make errors, you lose a little confidence. And you want to get back to winning as quick as you can.

"You miss 3- or 4-foot putts, you better make the next one. Otherwise, them others get tough. And I'm not even a golfer."

Florida State (11-5, 5-2 Atlantic Coast Conference) let a nine-point lead slip away in regulation and needed Evans' driving layup high off the glass with two seconds left to send the game to overtime. The Seminoles held on for their first win over a ranked Duke team since Jan. 10, 2017.

Braun then drained two at the other end with four seconds to go. Oklahoma, out of timeouts, missed a desperation heave that could have forced overtime.

LUBBOCK, Texas -- Kevin Obanor scored 13 of his 15 points after halftime as Texas Tech beat Iowa State for its third consecutive victory against a ranked opponent.

Since losing at Iowa State with only seven healthy players two weeks ago, the Red Raiders (14-4, 4-2 Big 12) have won four of five.

Bryson Williams had 16 points to lead the Red Raiders, and Davion Warren had 11. Obanor also had eight rebounds.

Caleb Grill had 17 points with four three-pointers for Iowa State (14-4, 2-4), while Izaiah Brockington had 12 points and nine rebounds.

Chris Knight added 12 points on 6-of-7 shooting for the Ramblers (14-2, 5-0 Missouri Valley Conference), who are off to their best start in league play since joining the MVC for the 2013-14 season.

HARTFORD, Conn. -- Adama Sanogo had 13 points and 15 rebounds to lead UConn past Butler in the first of two games this week between the programs.

Missouri led by double figures the entire second half. Ole Miss pulled within 57-47 after a 9-0 run, but the Tigers answered by scoring the next 15 points .

Javon Pickett and Ronnie DeGray III each had 11 points for Missouri (8-9, 2-3). Point guard Jarron Coleman grabbed a career-high 13 rebounds, to go with eight points and seven assists, to help the Tigers hold a 40-26 edge on the glass.

Daeshun Ruffin scored 12 points for Mississippi , which has lost five of its last six games. Nysier Brooks had eight points and 10 rebounds.