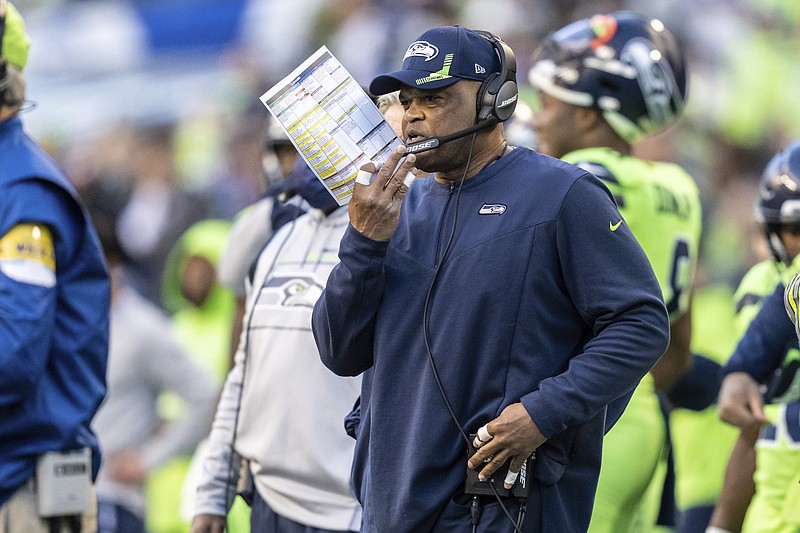 The Seattle Seahawks have fired defensive coordinator Ken Norton Jr. and passing game coordinator Andre Curtis, the team said Tuesday. Norton's firing brought an end to what had been several seasons of continuity on the defensive side. The news was first reported by The Seattle Times. Coach Pete Carroll had said last week it was too early to know the extent of changes coming to the Seahawks' coaching staff. But he noted two specific areas for improvement -- creating more turnovers and improving the pass rush -- and both are on the defensive side. Norton spent four seasons as Seattle's defensive coordinator, but the final two years were defined by a unit that struggled badly in the early part of the year and progressively got better. Seattle never finished higher than 16th in total defense or 11th in scoring defense during Norton's tenure. Seattle was 28th in total defense and 11th in scoring defense this season. Curtis joined the Seahawks before the 2015 season and was promoted to passing game coordinator in 2018. He also worked for New Orleans, the New York Giants and the Rams before joining the Seahawks.

Cleveland Browns defensive tackle Malik McDowell, who was given a second chance by the team after serving jail time, was arrested Monday in Florida on charges of beating a police officer and public exposure. Police in Deerfield Beach, Florida, said they were responding to a "naked male walking near a school" when an officer approached McDowell, who was sitting on a curb, according to the arrest report. The officer said McDowell, 25, stood up, uttered an obscenity at him and "charged at me full speed with a closed fist." The officer said he was unable to avoid McDowell's attack or use any "de-escalation tactics." McDowell slammed into the officer and punched him in the right eye and on the top of the head, according to the report. McDowell fled before he was stopped using a stun gun and handcuffed. The officer said his right eye was nearly closed because of swelling from the punches he absorbed in the attack and there is a "likelihood that I sustained permanent injury to my eye." McDowell was charged with aggravated battery on an officer, resisting an officer/obstructing with violence and exposure of sex organs in public. Bail was posted at $25,000. It was unclear if he had an attorney who could speak on his behalf. The Browns released a statement on McDowell, who was under contract with the team for only one season, saying they were seeking more information.

Jacksonville Jaguars defensive end Lerentee McCray made an obscene hand gesture at a police officer, fled a would-be traffic stop and then reached speeds of 100 mph and crossed three lanes of traffic during an ensuing chase, authorities said Tuesday. McCray, 31, was arrested early Sunday, booked in the Lake County jail and charged with fleeing and attempting to elude law enforcement, according to jail and police records. The charge is a second-degree felony. He was released on a $5,000 bond about seven hours later, according to jail records. "We are aware of the situation and are gathering more information," the Jaguars said Tuesday in a statement. "We have no further comment at this time." McCray was initially clocked doing 88 mph in a 50-mph zone by the Fruitland Park Police Department, police said. An officer attempted to pull him over, but McCray flashed him his middle finger, honked his horn and took off. Officers ended their chase after McCray reached speeds deemed unsafe. McCray was later pulled over by Tavares Police Department officers, who said McCray "appeared to have an altered mental state." He was transported to a nearby hospital for evaluation. While McCray was being treated, the Fruitland Park police officer who initially tried to pull him over advised him of the charges and said he replied: "Oh, that was you? My bad." McCray was cited for speeding and fleeing and attempting to elude law enforcement. He is scheduled to be arraigned Feb. 14.

The Los Angeles Dodgers promoted former major league pitcher Brandon Gomes to general manager on Tuesday, filling a spot that had been vacant since 2018. Gomes had been an assistant GM with the team since 2019. The Dodgers last had a GM in 2018, when Farhan Zaidi quit that November to join the rival San Francisco Giants. In his new role, Gomes will continue working closely with Andrew Friedman, president of baseball operations, as he has since being promoted to director of player development in 2017. Gomes was named assistant GM in 2019. The 37-year-old former pitcher first joined the team in 2016 as coordinator of pitching performance. He pitched for San Diego, Tampa Bay and the Chicago Cubs from 2007-16. He was first acquired by Friedman in 2011 when Friedman was working for the Rays.

Minnesota has become the latest team with a covid-19 problem. The Gophers announced Tuesday they were postponing their game today at Penn State because the team had fallen below the conference minimum of seven available scholarship players. The rescheduled date has not yet been determined. When Minnesota lost at home Sunday to Iowa, four players were missing due to virus protocols, illness or injury, and the absence list grew after testing Monday. The Gophers are next scheduled to play Saturday at home against Rutgers. On the women's side, sixth-ranked Indiana postponed two games this week -- today against Michigan State and Sunday against No. 25 Iowa -- because of covid-19 protocols within the program. The Hoosiers have had four games postponed or canceled over the last month. Their next scheduled game is Jan. 27 against Illinois. In the nearly three months since the Division I college basketball season began, more than 840 games have been postponed or canceled because of covid-19 -- including more than 440 women's games and more than 400 men's games.

Centers Steven Stamkos of the Tampa Bay Lightning, Nazem Kadri of the Colorado Avalanche and Mika Zibanejad of the New York Rangers, and Anaheim winger Troy Terry won the final roster spots for All-Star Weekend as a result of fan voting, the NHL announced Monday. The league said Zibanejad cannot attend the Feb. 4-5 event at T-Mobile Arena in Las Vegas for personal reasons. He will be replaced by Pittsburgh Penguins left wing Jake Guentzel, who finished second in the Metropolitan Division voting. Stamkos will join the Atlantic Division team, Kadri goes to the Central Division squad, and Terry to the Pacific. The event features a three-game tournament played in a 3-on-3 format, with 11-man teams from each of the league's four divisions. Washington star Alex Ovechkin and high-scoring Edmonton teammates Connor McDavid and Leon Draisaitl headlined the rosters announced on Thursday.