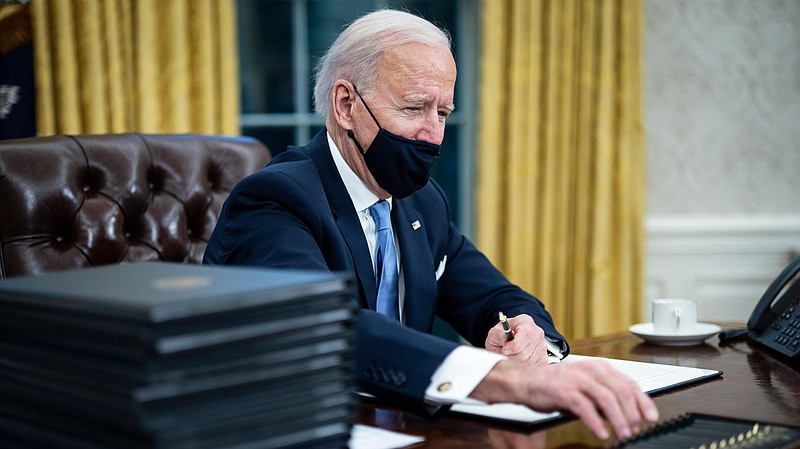 President Biden signs a series of executive orders on the pandemic response hours after being sworn into office on Jan. 20, 2021. MUST CREDIT: Washington Post photo by Jabin Botsford

WASHINGTON -- President Joe Biden entered office a year ago this week, staking his presidency on defeating the coronavirus pandemic with a battle plan hailed for its scope and specificity.

"Our nation continues to experience the darkest days of the pandemic," the White House declared in its national pandemic strategy, released Jan. 21, 2021. "Businesses are closing, hospitals are full, and families are saying goodbye to their loved ones remotely."

Yet after a reprieve in which Biden's vaccination focus appeared to be paying off, many of those problems have roared back as the delta variant, and then omicron, tore across the country. Once again, doctors and nurses are pleading for relief, as hospitalizations set new daily records and more facilities move to ration care. Many Americans say they're confused by government pronouncements and losing faith in the agencies handling the response. Essential workers in packing plants, food service and emergency response say they still feel endangered by a virus that Biden had vowed to control.

"He promised he would take care of health workers, but it doesn't feel that way," said Cathy Kennedy, a neonatal nurse who helps lead the California Nurses Association. Kennedy said she worried that infected colleagues are being rushed back to work by short-staffed hospitals and blamed the White House for failing to enact permanent workplace safety standards to protect them.

Biden oversaw a 200-page pandemic plan that promised to restore trust in the federal government, protect essential workers and slow the coronavirus's spread. But he has struggled to execute key parts of it.

Page 59 promised "predictable and robust" federal purchasing of coronavirus tests -- a pledge that industry leaders say fell far short, as Americans continue to line up to get tested while complaining they can't find home test kits.

Page 81 pledged to "support schools in implementing COVID-19 screening testing," but many parents, teachers and staff say schools have largely been left to fend for themselves.

And Page 103 vowed "to ensure patient safety" in nursing homes by boosting staffing and vaccinations, yet worker shortages persist and elderly residents lag behind on getting booster shots.

Some of Biden's biggest challenges on executing that plan have been beyond his control, including courts that delayed and then blocked his vaccination-or-test mandates; Republicans who fought calls for masking and promoted vaccine disinformation; and, most significant, an unpredictable virus that has evolved to evade some protections conferred by vaccines even as it became more transmissible.

"This is a good plan overcome by events," said Andy Slavitt, who served as a senior adviser on the White House covid response last year. "Everyone had a failure to anticipate delta and omicron, the administration included."

But many say the United States would have been better prepared to deal with the virus's curveballs if the administration had more quickly delivered on promises to improve testing and real-time virus surveillance and encouraged masking nationwide, rather than focusing so heavily on vaccines. The nation's struggles to ramp up access to rapid tests this winter could have been avoided, for instance, had the White House stuck to pledges to boost test supply last year and explain to Americans when to use them, said outside advisers and co-authors of Biden's plan.

"We'd be in a better place to deal with omicron, because we'd have more tools to fight it," said a person who helped craft Biden's plan and spoke on condition of anonymity.

About 49% of Americans said Biden was doing a good job handling the covid outbreak, down from 67% who approved of his response last March, a period when the virus was receding, according to a CBS News/YouGov poll released this week. Thirty-six percent of Americans said U.S. efforts to contain the virus were currently going well.

Even some of Biden's allies are demanding answers about why longstanding issues remain unresolved.

"I'm frustrated we're still behind on issues as important to families as testing and supporting schools," said Sen. Patty Murray, D-Wash., who grilled Biden officials at a Senate Health, Education, Labor and Pensions hearing last week. "That's not to say we have not made progress. It's just clear we haven't made enough."

White House officials insist they have carried out virtually all the promises in Biden's plan, a list of seven broad goals that contain more than 180 discrete pledges that include addressing "disinformation and misinformation" and vaccinating Americans, as well as rejoining the World Health Organization and launching a national epidemic forecasting hub at the Centers for Disease Control and Prevention.

Officials say they have used the pandemic plan as their compass and have worked around-the-clock to implement it.

"The team sort of teases me that it's my security blanket," said Jeff Zients, the president's coronavirus strategy coordinator, who keeps a blanket in his office that is emblazoned with an image of the plan's cover. (The other side reads "execution, execution, execution," a not-so-subtle exhortation to his staff who sometimes borrow the blanket when they get cold.)

"If you look across the seven areas, I think we've made a lot of progress across all of them," Zients said, touting metrics about expanding access to tests, reopening schools and immunizing millions of Americans. "It's the execution that's led to 210 million people now fully vaccinated and 80 million boosted," he said.

Zients acknowledged one area, however, in which "we underestimated in that original strategy ... the amount of disinformation and the fact that people would actually stand in the way of the pandemic response for political or other motivations."

Asked to grade Biden's progress, 17 outside public health experts credit the administration with achieving some of its most important priorities. They note that about 63% of Americans are now fully vaccinated, helping protect them from the worst consequences of the virus. Health disparities that Biden inherited, linked to higher covid death rates among communities of color, were dramatically reduced. Global health alliances needed to coordinate a worldwide pandemic response were restored.

But each of the outside experts characterized key parts of Biden's plan as unfinished, saying much work remains to fulfill the president's promises to protect essential workers, curb the virus's spread and restore Americans' trust in the federal government, among other goals.

"All of the items here, you could credibly say, have been addressed in some way, most of them substantively," said Krishna Udayakumar, director of the Duke Global Health Innovation Center, referring to Biden's global strategy promises such as supporting the WHO, joining a vaccine-sharing alliance and resuming global leadership after the Trump administration retreated from those roles.

"The administration can and does credibly say they are doing more than almost every other country... . And it is also true that none of it is even close to being enough to end the pandemic."