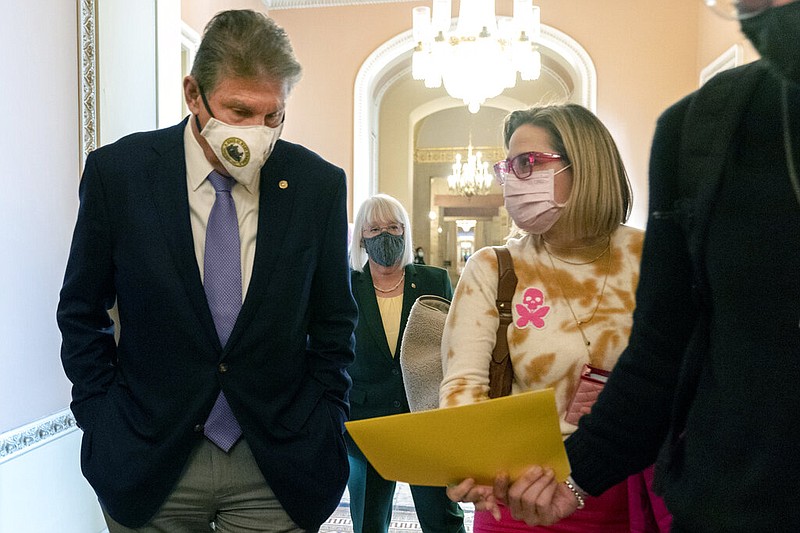 WASHINGTON — Voting legislation that Democrats and civil rights leaders say is vital to protecting democracy collapsed late Wednesday when two senators refused to join their own party in changing Senate rules to overcome a Republican filibuster after a raw, emotional debate.

The outcome was a defeat for President Joe Biden and his party, coming at the tumultuous close to his first year in office.

Despite a day of piercing debate and speeches that often carried echoes of an earlier era when the Senate filibuster was deployed by opponents of civil-rights legislation, Democrats could not persuade holdout senators Kyrsten Sinema of Arizona and Joe Manchin of West Virginia to change the Senate procedures on this one bill and allow a simple majority to advance it.

“I am profoundly disappointed,” Biden said in a statement after the vote.

However, the president said he is “not deterred” and vowed to “explore every measure and use every tool at our disposal to stand up for democracy.”

Voting-rights advocates are warning that Republican-led states nationwide are passing laws making it more difficult for Black Americans and others to vote by consolidating polling locations, requiring certain types of identification and ordering other changes.

Vice President Kamala Harris briefly presided over the Senate, able to break a tie in the 50-50 Senate if needed, but she left before the final vote. The rules change was rejected 52-48, with Manchin and Sinema joining the Republicans in opposition.

The nighttime voting brought an end, for now, to legislation that has been a top Democratic priority since the party took control of Congress and the White House.

WASHINGTON — Voting legislation that Democrats and civil rights groups argued is vital for protecting democracy was blocked Wednesday by a Republican filibuster, a setback for President Joe Biden and his party after a raw, emotional debate.

Democrats were poised to immediately pivot to voting on a Senate rules change as a way to overcome the filibuster and approve the bill with a simple majority. But the rules change was also headed toward defeat, as Biden has been unable to persuade two holdout senators in his own party, Kyrsten Sinema of Arizona and Joe Manchin of West Virginia, to change the Senate procedures for this one bill.

“This is not just another routine day in the Senate, this is a moral moment,” said Sen. Raphael Warnock, D-Ga.

The initial vote was 49-51, short of the 60 votes needed to advance over the filibuster. The vote was almost exactly split along party lines, with Sens. John Boozman and Tom Cotton, both R-Ark., voting no. Senate Majority Leader Charles Schumer, D-N.Y., also voted no, but for procedural reasons so Democrats can revisit the legislation.

The nighttime voting capped a day of piercing debate that carried echoes of an earlier era when the Senate filibuster was deployed in lengthy speeches by opponents of civil rights legislation.

Voting rights advocates are warning that Republican-led states nationwide are passing laws making it more difficult for Black Americans and others to vote by consolidating polling locations, requiring certain types of identification and ordering other changes.

Democrats decided to press ahead despite the potential for high-stakes defeat at a tumultuous time for Biden and his party. Biden is marking his first year in office with his priorities stalling out in the face of solid Republican opposition and the Democrats’ inability to unite around their own goals. But the Democrats wanted to force senators on the record — even their own party’s holdouts — to show voters where they stand.

“I haven’t given up,” Biden said earlier at a White House news conference.

Sinema and Manchin have withstood an onslaught of criticism from Black leaders and civil rights organizations, and they risk further political fallout as other groups and even their own colleagues threaten to yank campaign support.

Schumer contended the fight is not over and he ridiculed Republican claims that the new election laws in the states will not end up hurting voter access and turnout, comparing it to Donald Trump’s “big lie” about the 2020 presidential election.

The Democrats’ bill, the Freedom to Vote: John R. Lewis Act, would make Election Day a national holiday, ensure access to early voting and mail-in ballots — which have become especially popular during the covid-19 pandemic — and enable the Justice Department to intervene in states with a history of voter interference, among other changes. It has passed the House.

Both Manchin and Sinema say they support the legislation but are unwilling to change Senate rules. With a 50-50 split, Democrats have a narrow Senate majority — Harris can break a tie — but they lack the 60 votes needed to overcome the GOP filibuster.

Instead, Schumer put forward a more specific rules change for a “talking filibuster” on this one bill. It would require senators to stand at their desks and exhaust the debate before holding a simple majority vote, rather than the current practice that simply allows senators to privately signal their objections.

But even that is expected to fail because Manchin and Sinema have said they are unwilling to change the rules on a party-line vote by Democrats alone.

Emotions were on display during the floor debate.

When Sen. Dick Durbin, D-Ill., asked Senate Republican leader Mitch McConnell of Kentucky whether he would pause for a question, McConnell left the chamber, refusing to respond.

Durbin said he would have asked McConnell, “Does he really believe that there’s no evidence of voter suppression?”

The No. 2 Republican, Sen. John Thune of South Dakota, said at one point, “I am not a racist.”

McConnell, who led his party in doing away with the filibuster’s 60-vote threshold for Supreme Court nominees during Donald Trump’s presidency, warned against changing the rules again.

McConnell derided the “fake hysteria” from Democrats over the states’ new voting laws and called the pending bill a federal takeover of election systems. He said doing away with filibuster rules would “break the Senate.”

Manchin drew a roomful of senators for his own speech, upstaging the president’s news conference and defending the filibuster. He said majority rule would only “add fuel to the fire” and it was “dysfunction that is tearing this nation apart.”

“For those who say bipartisanship is impossible, we have proven them wrong,” Manchin said, citing the recent infrastructure bill he helped pass into law. “We can do it again. … We can make it easier to vote.”

Several members of the Congressional Black Caucus walked across the Capitol building for the proceedings. “We want this Senate to act today in a favorable way. But if it don’t, we ain’t giving up,” said Rep. James Clyburn, D-S.C., the highest-ranking Black member of Congress.

WASHINGTON — Sens. John Boozman and Tom Cotton, Republicans from Arkansas, are expected to oppose an effort by Senate Democrats who aim to move forward on voting rights legislation Wednesday.

Arkansas is ranked last nationwide in voter turnout and voter registration, according to a federal report published last year on the 2020 general election. Nationwide, among the 50 states, Arkansas recorded by far the highest rejection rate for mailed-in ballots.

Democrats praise the omnibus voting rights legislation and supporters of the measure argue the reforms are critical to protecting American democracy.

But there’s solidified opposition to the voting legislation among Senate Republicans.

Democrats are operating with a razor-thin majority in the chamber and face the challenge of overcoming a GOP filibuster to pass the legislation. Senators continued to debate the measure on the chamber floor Wednesday.

Senate Majority Leader Chuck Schumer said he would submit a proposal to change the rules to allow for a “talking filibuster” on the voting rights measure, if Republicans oppose moving forward on the legislation.

“On something as important as voting rights, if Senate Republicans are going to oppose it, they should not be allowed to sit in their office. They’ve got to come down on the floor and defend their opposition to voting rights,” he said Tuesday.

Republicans, who have railed against the voting legislation, say the filibuster is key to preserving the voices of the minority political party in the Senate.

During a speech on the Senate floor, Boozman said many Democrats are yielding to “short-sighted political calculations.” He accused them of endorsing changing the Senate rules to ram through their legislative priorities.

“The ability to prevent radical, swift and far-reaching changes that would surely sow confusion and uncertainty is invaluable,” he said in the remarks earlier this month. “As such, I intend to continue protecting the filibuster.”

The bill, known as the Freedom to Vote: John R. Lewis Act, is a combination of previous legislation in Congress. The omnibus legislation would make Election Day a national holiday and would expand automatic voter registration, same-day registration and early voting, according to an overview from the Committee on House Administration.

For his part, Cotton has referred to voting rights legislation as an “election takeover bill.”

Arkansas’ all-Republican delegation in the U.S. House has opposed the bill. The House passed the voting measure earlier this month in a vote along party lines.

Schumer lambasted Republicans on Tuesday, arguing that “virtually every Senate Republican” is against legislation that would protect the right to vote. The right to vote, he said, is the cornerstone of the nation’s democracy.

“Over the past year, as you know, Republican-controlled legislatures have worked to pass legislation that would make it harder for Americans to vote,” he said, arguing that their efforts are aimed at “people of color, at poor people, at young people, at disabled people, at elderly people, at people who live in cities.”