Banker's profits on rise, but so is wage inflation 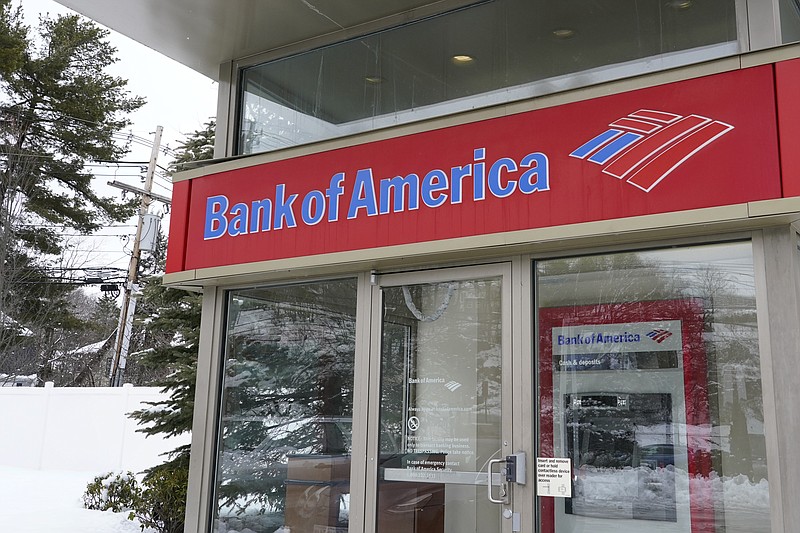 A Bank of America ATM is seen, Wednesday, Feb. 3, 2021, in Winchester, Mass. Bank of America said, Wednesday, Jan. 19, 2022, its profits rose 28% in the fourth quarter compared to a year earlier, but the bank faced the same wage inflation as its Wall Street counterparts.(AP Photo/Elise Amendola)

NEW YORK -- Bank of America said its profits rose 28% last quarter from a year earlier, but the bank faced the same wage inflation as its Wall Street counterparts.

The bank, based in Charlotte, N.C., saw most of its businesses increase profits in the quarter. But much of the growth was in Bank of America's investment banking division, which saw profits climb to $2.68 billion from $1.67 billion. Other banks with investment banking businesses saw a strong end to the year, as companies scrambled to close deals or go public.

Bank of America also got a one-time boost from a release of $851 million in loan-loss reserves last quarter. These reserves are money that banks set aside to cover potentially bad loans during the early part of the pandemic, and most banks have been steadily releasing those funds.

In Bank of America's consumer banking business, its largest division by revenue and profits, profits rose to $3.12 billion from $2.59 billion a year earlier. Consumers spent more on the bank's credit and debit cards while expenses were lower.

The bank recently shook up the industry by announcing that it planned to cut overdraft fees to $10 from $35 as well as stop charging a variety of fees that often would impact the bank's poorest customers.

Like its competitors, Bank of America is facing much higher compensation expenses. The bank spent $36.1 billion on wages and benefits last year, up 10% from a year earlier.

For the full year, Bank of America posted a profit of $30.56 billion, nearly double the $16.5 billion it earned in 2020 when the pandemic hit the global economy.

Average loan balances were up 1% in the fourth quarter from a year earlier, the bank said in a statement Wednesday. Lending has been a key focus for investors after demand remained weak for much of 2021, which is normally a bad sign for banks, but executives attributed depressed borrowing demand to companies and individual customers being flush with stimulus cash.

"This quarter was a strong finish to a record year of profitability," Alastair Borthwick, who was appointed chief financial officer in September, said on a conference call with reporters. "We had strong organic growth across our businesses in a growing economy."

Information for this article was contributed by Katherine Doherty of Bloomberg News (WPNS).

Print Headline: Banker's profits on rise, but so is wage inflation