RESTAURANT TRANSITIONS: Charlee's could reopen within week; Geyer Springs to get Chinese-Latin place 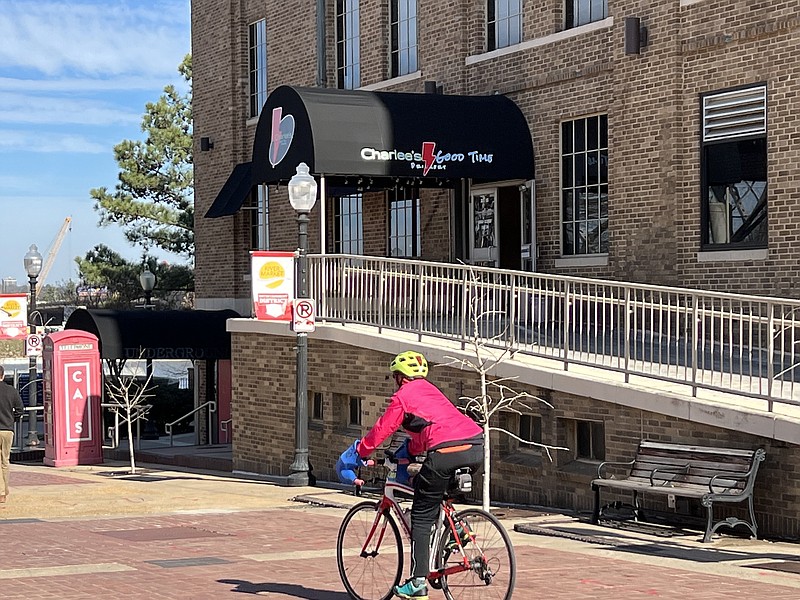 The folks at Charlee's Good Time Drinkery say they hope to open within the coming week in the former Damgoode Pies River Market location, 500 President Clinton Ave., Little Rock, that has housed at least a half-dozen restaurants over the past couple (or triple) of decades. You will recall Charlee's moved some months ago out of the Prospect Building, 1501 N. University Ave., Little Rock, and yielded up its open-until-5 a.m. private club license to do so. The menu will be similar to what Charlee's offered in Midtown, with the addition, since they have more kitchen capacity, of some more salads and sandwiches. Hours will be 11 a.m.-2 a.m. Monday-Friday, 11 a.m.-1 a.m. Saturday, 11 a.m.-midnight Sunday. The correct phone number is (501) 747-1246; facebook.com/charleesgoodtime.

And speaking of places named after variants of Charles, one of our correspondents has recalled our attention to Charlie's Place, going into the former Professor Bowl South, 8624 Interstate 30, Little Rock. We reported in October that Maurice Mahmoud had filed for a restaurant mixed drink maximum permit for that establishment, and we've found a Facebook page (facebook.com/Charlies-Place-103374045457323) with a prominent "Now Hiring: Inquire Within" sign as its profile photo.

One of our correspondents discovered this sign — "Coming soon: Little China & Latino Food" — outside the vacant building at 8211 Geyer Springs Road and Dreher Lane, Little Rock, that formerly housed K-Beeez Chicken & Waffles. We have no details yet as to what the menu will look like, but it did lead us to do a little research, whereupon we discovered that Chinese Latin American, aka Chino-Latino cuisine, is a thing — a fusion found in Chinese communities and Chinatowns across Latin America.

And speaking of waffles, the nearby Waffle House at 8107 Geyer Springs has closed for remodeling.

The most recent crop of Little Rock building permits include one for $1.15 million for a "new [from the] ground up Tropical Smoothie Cafe with drive-thru and patio" at 17710 Cantrell Road, and one for $200,000 worth of "Nature Work: New floor covering in dining/bar area, painting of all dining/bar area and exterior; remove wood siding and install stone on exterior; new wall separating bar from dining area" at 17707 Chenal Parkway, which is the exact address of Sullivan's Steakhouse, going into the former Del Frisco Grill in the Promenade at Chenal.

Chef Danny Goynes of Hot Springs' Kroc-Coos Rolling Cajun Kitchen posted Jan. 6 on Facebook (facebook.com/KrocCooos): "Effective immediately, I will be closing Kroc-Coos Cajun Kitchen, located at [Arkansas] Hwy 7 West Gate [of Hot Springs Village]. ... This decision is based on a history of limited local support of Cajun Cuisine, rising food and labor costs, and labor interruptions/shortages." Goynes will continue to operate his so-far-successful (by his own account) food trailer at the 420eats Food Court, 420 Malvern Ave., Hot Springs. The listed phone number: (501) 915-1300; the website is www.kroc-coos.com.

Somehow last week we managed to incorrectly conflate the ownership of Red Light Roastery Coffee House, 1003 Park Ave., Hot Springs — that's Adam and Briana Moore — with the new owners of the Spa City's Mueller's Bistro & Bakery, 111B Crawford St. — Corey and Briana Graves. They are not the same people. The actual connection: The bakery will be buying its coffee from Red Light Roastery.

And while we're in Hot Springs, Destinie Rivera-Rowland is leasing the dining room in what is currently Will's Cinnamon Shop, 1001 Central Ave., to open Destiny's Bakeshop sometime in February. That's per a recent post on the bakery's Facebook page (facebook.com/willscinnamonshop): "Destiny's will be a full bakery selling cakes, pies, cupcakes, breakfast sandwiches, and after about a week or so of business she will start [selling] sandwiches at lunch." That includes the Will's Club sandwich that Will's customers might otherwise have missed. Rowland, according to the post, will continue to sell Will's homemade, totally-from-scratch cinnamon rolls, in addition to her own baked goods; Will's, which is in the process of baking king cakes, will continue to operate out of the garage side of the building "and out of our food trailer." The phone number is (501) 538-4650; Will's website is willscs.com.

In more Spa City restaurant news, Red Pier Cajun Seafood & Bar has a Jan. 31 target to open in what had previously been at least two Chinese restaurants (First Wok Buffet and New China, not necessarily in that order) at 4510 Central Ave. It turns out this is the long-awaited outlet, in a second brand, of Tennessee-based mini-chain Red Hook Seafood & Bar. Other Red Piers extend into West Memphis, Memphis and Southaven, Miss.; Red Hook has outlets in Memphis, Bartlett and Jackson, Tenn., one in San Antonio; and one in Southaven. Hot Springs hours: 11:30 a.m.-10 p.m. Sunday-Thursday, 11:30 a.m.-11 p.m. Friday-Saturday. The phone number is (501) 701-4329; find the menu and other information online at redpierseafood.com. Meanwhile, we have no new information on what was expected to be a Red Hook opening in the former New China building, 2104 Harkrider St., Conway.

And the Arts & Science Center for Southeast Arkansas, 701 S. Main St., Pine Bluff, is offering an eight-week session of its CrEATe Lab cooking program, 1-3 p.m. Saturdays starting this week (Jan. 22 and 29, Feb. 5, 12, 19 and 26 and March 5 and 12). Faith Anaya and the staff of her Little Rock-based Kids Cook! school are the instructors; the recipe theme is "Winter Stuff and Kids' Choice" and the sessions will cover cooking safety, food science, reading nutrition labels, food careers, global food, trying new foods, gardening and making mini cooking videos. There's also a community service component in which food is prepared for a local food pantry. The cost is $35 for all eight sessions (half scholarships are available); capacity is limited to 10 students. Visit asc701.org/create-lab or call (870) 536-3375 to register.