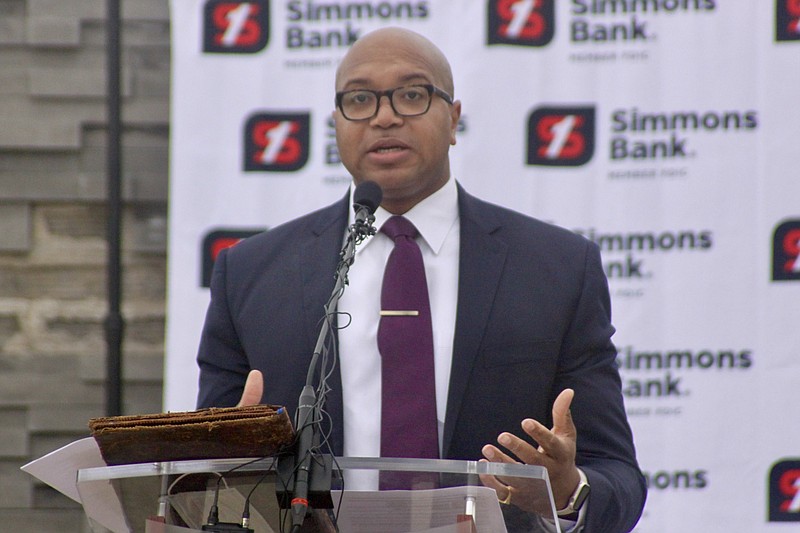 "ALICE households are your everyday people, working two or more jobs, contributing to the economy as taxpayers, yet the cost of living continues to outpace their earnings," said Watley, who pointed out that ALICE households earn more than the federal poverty level but don't earn enough to cover the basic costs of living. "These families are known as the working poor who strive every day to make ends meet."

According to Watley, ALICE families' living expenses take as much as half of their incomes, and as part of one of the Go Forward Pine Bluff's 26 promised initiatives, officials wanted to assist ALICE families while spurring social and economic growth in Pine Bluff. Using a study by the Winthrop Rockefeller Foundation on ALICE families, Watley said such families are often subjected to rental payments that are well above what a mortgage payment would be.

In many cases, what stands in the way of an ALICE family buying a house is that they don't have a qualifying credit score, down payment and closing costs. Watley said 10 months of meeting and planning with community partners resulted in a product to address those challenges, reverse the population decline and improve neighborhoods.

"Thanks to the work of the coalition led by Go Forward Pine Bluff, ALICE families who reside in the Pine Bluff Metropolitan Statistical Area are now eligible for 100% financing over a 30-year term through Simmons Bank," said Watley.

Simmons Bank committed $2 million and developed a 97% financing option over 30 years to help revitalize one of Pine Bluff's most investment-deprived areas.

"For those familiar with Pine Bluff, South Pine Bluff has traditionally been the wealthier end of the town concerning home value," said Watley. "If you drive down Cherry Street you will notice a gradual transition as you travel south."

Geographically, the investment area is bound to the south by 34th Avenue; to the north by 17th Avenue; to the east by Olive Street; and to the west by Hazel Street, an area from which the Pine Bluff Urban Renewal Agency has worked to remove blight.

This area was selected to spur investments across the mix of low-, moderate- and medium-income census tracts in the footprint," said Watley. "The economic diversity potentially helps all achieve a more equitable position at a faster rate."

According to Pine Bluff Mayor Shirley Washington, her office will advance legislation to the Pine Bluff City Council that will activate the Neighborhood Enhancement Act.

"Legislative approval will allow the city to provide homeowners or developers up to 20% of the cost for new construction or rehabilitation of a home in the targeted 97% advantage area," said Washington, who added that the agreement required homeowners to live in the area for five years.

"Complex challenges require dynamic solutions," said Washington. "It is my hope that upon approval of this legislation, it will inspire our local developers to actively rebuild our community and attract outside investment to enhance the overall quality of life."

Coined the 97% Affordable Advantage and the 100% Advantage Home Mortgage, Simmons Bank lowered the qualifying credit rating to 580 and 620, respectively, to increase homeownership in geographic locations within the city.

Martie North, a Simmons Bank senior vice president and director of community development, said she was proud of the $2 million the bank had set aside to support the affordable housing initiative.

"We are committed to supporting our communities," she said. "Our commitment to Pine Bluff and Jefferson County remains steadfast."

Go Forward Pine Bluff also established the Pine Bluff Homeowners' Association that will provide a secondary loan for closing costs and mortgage down payments of up to 3% of the mortgage costs.

Liberty Utilities and the United Way of Southeast Arkansas contributed $65,000 to support the down payment and closing cost assistance initiative. Leslie Dorn, director of the United Way, said the money was left over from a $250,000 donation Liberty gave to the United Way last year to pay for homeowners' water repairs from the winter water crisis.

"We wanted to remove all barriers for ALICE in terms of a homeownership approach," said Watley, who added that a total of $300,000 was raised. "We are able to now distribute nine homes annually."

Relyance Bank will handle the initial paperwork on the loans and service them. Residents in the Pine Bluff Metropolitan Statistical Area are eligible for the 100% Advantage Home Mortgage, an economic asset that Watley hopes residents will take advantage of.

"Once you have a home you can leverage that for many different things," he said. "Most have been excluded because of credit scores or don't have the down payment or closing cost."

Watley said the income qualification is based on the average medium income, which will be 80% in some areas and 120% in other areas. Homes can be purchased or refinanced through this program.

"If someone is actually living in that area, they may get a better rate," said Watley.

Watley said the coalition developed a strategy to usher ALICE families into an equitable homeownership position, which will, in turn, reduce the strain on living expenses and provide a potential economic asset.

"In my time as CEO, this is one of the more impactful actions we have taken to make a difference," said Watley. "Access to homeownership is one of the principles to achieving the American dream. I am thankful to all parties, particularly to Simmons Bank, for the risk they are assuming and to Relyance Bank for helping us administrate the program."

For more information about the Affordable Advantage Mortgage or a 100% Affordable Mortgage, call Simmons Bank in Pine Bluff 870-541-1032.