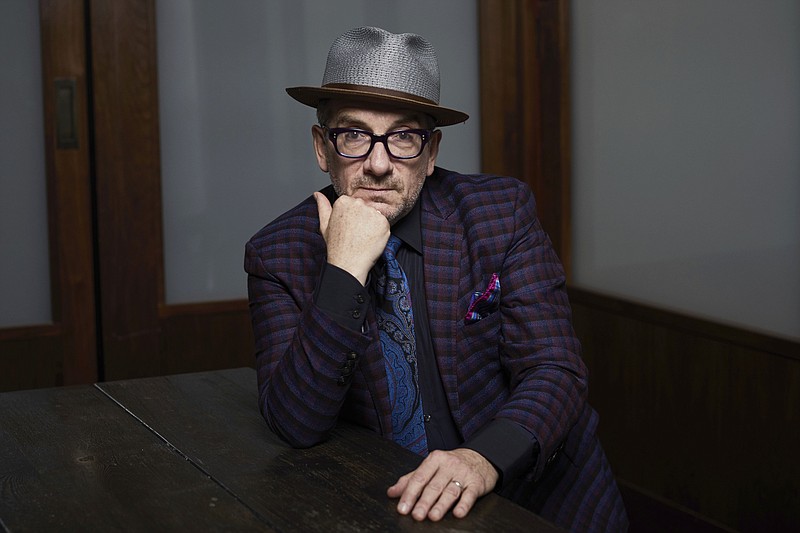 Elvis Costello poses for a portrait in New York in 2018. Costello’s new album, the coronavirus-era disc “The Boy Named If” was made in solitary style — four musicians, five if you count a backup singer on one song, all worked from their own homes. He says that conjures the image of a laid-back sound, but the new disc is an up-tempo, guitar-based selection of crankin’ rock songs. (Invision/AP file/Matt Licari)

NEW YORK — Elvis Costello's 32nd album rings with the sound of a tight rock 'n' roll combo sweating together on a tiny stage, feeding off each other to produce a joyful noise.

Yet that's all a mirage.

Costello and his three-piece band, the Imposters, were never in the same city, much less the same room, as they made "The Boy Named If," which is out Friday. They were waiting out the coronavirus, like everyone else, and looking to do something productive.

After writing, Costello would make an initial recording of a song with his vocals and guitar at his home in Vancouver, British Columbia. He'd send it to Pete Thomas, who retreated to his basement in Los Angeles to add drums. Bass player Davey Faragher was next, before it was sent to keyboard wizard Steve Nieve in France. Nicole Atkins added guest vocals on the song, "My Most Beautiful Mistake," from a fifth location.

Occasionally they'd jerry-rig a FaceTime connection so they could look at one another, although that wasn't conducive to recording because of delays in each connection.

Producer Sebastian Krys, from his own home, "did a terrific job in making it sound not like it was something made with a construction kit," Costello said.

"I think everybody surprised themselves how we found ourselves in our basement or spare room playing and it sounded so vibrant," he said. "We didn't let that hold us back. When we found out that it worked, it just spurred us on."

The image of the Beatles in the "Get Back" film romanticized the idea of a band creating music by working face to face and kicking around ideas.

But the idea of creating songs through multi-track recordings predated even the Beatles, said Prince Charles Alexander, a professor at the Berklee College of Music and a producer/audio engineer who has worked with the likes of Sting, Luther Vandross and Aretha Franklin.

Technology around the turn of the 21st century advanced and became affordable to the point where most musicians effectively have studios in their homes, he said. While there were lingering fears that home recordings would feel sterile and lack soul, "now we have a generation of producers, recording engineers and producers, that are kind of over it," he said.

With the coronavirus, many musicians have little other choice but to work alone.

When the weather was good in Vancouver, Costello set up on his back porch, "which conjures up a much more laid-back sound than this record," the singer said.

Indeed, "The Boy Named If" crackles with energy, virtually all up-tempo songs driven by guitar. The arrangements demand a lot from Costello's voice, and the underrated Thomas delivers some of his best drumming on record.

In the album's liner notes, the band offers "special thanks from these louses to our spouses for letting us make all this racket around the houses."

While the untrained ear can't detect any difference between the solitary set-up and how the band sounds onstage, the order in which the work was done made for an interesting departure. Nieve's keyboards have provided the musical framework for much of Costello's music throughout his career, but in this case they were the last instruments to be added.

"We would send it to Steve and he would say, 'What am I supposed to do? You've finished already,'" Costello said. "I said, 'I think you'll find where to play.'

"It sounds a little different," he added. "Steve is playing in different places in the flow. He was answering, where normally he was leading the way. His ingenuity in choosing where to play and not just play on top of everything sounded fresh."

The disc's title song provides a loose thematical frame to the collection of songs, creating the image of a child's imaginary friend if that extended into adulthood.

"I was drawing comparisons to the excuse that a child makes — 'Oh, it was my imaginary friend who broke that,'" he said. "In the case of a child, it's usually a cup or a vase, instead of a heart or some vow you've made."

Costello, 67, has been busy during the pandemic. "The Boy Named If" is his third release in 14 months, following the "Hey Clockface" album and "Spanish Model," where Spanish-language singers replaced his vocals on his 1978 album "This Year's Model." Oops, don't forget the EP of French versions of some "Hey Clockface" songs.

A decade ago, he'd been talking openly about ending his recording career and concentrating on live performances.

Like many music fans, he was absorbed in the Beatles' "Get Back" film. Unlike anyone else, Costello is a Rock & Roll Hall of Fame member raised in Liverpool who, during the 1980s, wrote some songs with Paul McCartney.

He practically shouted at his TV during the passage where George Harrison told John Lennon that he was stuck on a lyric to "Something," wondering how to complete the line, "attracts me like ..."

How come you can't see it should be "no other lover"? Isn't it obvious?

"It gives great comfort to anybody who's ever stumbled around on the guitar to see this very famous band at times be really exposed as just making anything up to fill the space until the really inspired line came," he said. "It wasn't all done with a quill pen and flourish of poetics."