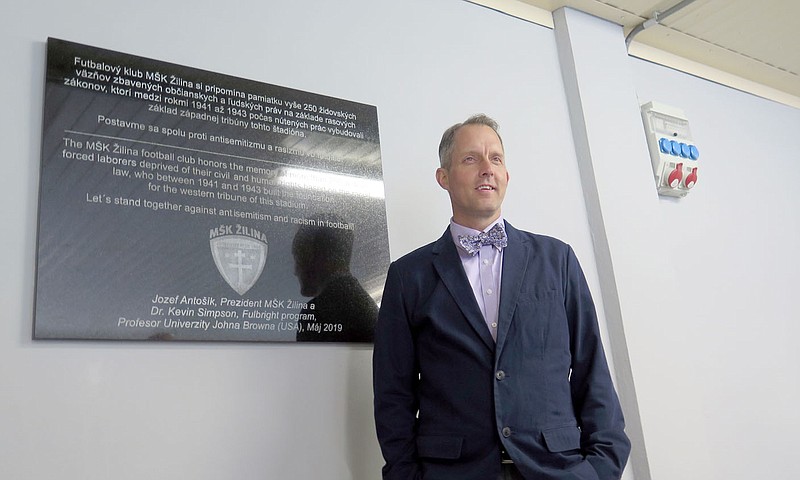 Photo submitted Dr. Kevin Simpson stands by a memorial dedicated to 250 Jewish forced laborers who helped build the Stadion pod Dubnom during the 1940s in Zilina, Slovakia. The JBU professor was one of the driving forces to have the memorial installed.

SILOAM SPRINGS -- In May 2019, Dr. Kevin Simpson, a John Brown University professor, helped to install a memorial plaque for Holocaust victims in Slovakia, and he recently received an award for his efforts.

Simpson and his colleague Dr. Michal Vanek worked with different organizations in Zilina, Slovakia, to place the plaque honoring 250 Jewish forced laborers who helped construct portions of the Stadion pod Dubnom (Stadium under the Duben Hill), according to a press release issued by JBU in December 2019.

The two professors also worked on an exhibit "Football Under the Swastika: The Story of Leopold 'Jim' Stastny" at the Museum of Jewish Culture housed in the state-run Slovak National Museum.

Two-and-a-half years later Simpson and Vanek received the Julius Hirsch Honorary Prize on Nov. 22 in Frankfurt, Germany for their work.

"So many of the people who labored in places like this, in the camps and factories in private sort of locations ended up being anonymous and had perished," Simpson said. "So it was a way to have at least just this moment we could recognize their sacrifice and acknowledge the serious likelihood that they probably perished."

Simpson, who also serves as the department chair of the JBU psychology department, has been teaching social psychology, which often included references or examples from World War II, he said. The propaganda dealt with mass persuasion and Nazi Germany.

A friend of Simpson's encouraged him to take his study a little further, and eventually Simpson took some seminars for educators at the Holocaust Museum in Washington D.C.

"I'd always been interested in World War II since I was a kid," Simpson said. "It was just a natural connection there. This topic area really lends itself well to multiple disciplines: History, psychology, sociology, even economics."

In 2009, Simpson began his first two-week seminar, he said. During the seminar's second week, there was an attack on the museum by a white supremacist, Simpson said.

The attack occurred on June 10, 2009, and led to the death of officer Stephen Tyrone Johns, who lost his life protecting museum visitors and staff, according to ushmm.org.

One of the subway stops to the hotel Simpson was staying at was near the hospital where Johns and the shooter were taken.

"It was this interesting contrast because you have this man who spewed hate online, who ultimately ended up taking a life, and the guard he shot who helped us every day was being cared for by the same team," Simpson said.

For Simpson this history is always going to be here, he said.

In 2018 Simpson received a Fulbright U.S. Scholar Grant from the U.S. Department of State and the J. William Fulbright Foreign Scholarship Board.

Simpson used the funds to teach two courses at Comenius University in Bratislava, Slovakia, for a semester. Simpson taught two courses: The social psychology of the Holocaust and sport and exercise psychology beginning in February 2019.

It was during his time in Slovakia that Simpson learned of the Jewish laborers who built the grandstands of the stadium in Zilina.

After reading about this in a Holocaust encyclopedia, Simpson knew he had to learn more about this, he said. Simpson had always been a big soccer fan and even played it at JBU, he said.

On a cold day in March, Simpson took the three-to-four-hour train ride from Bratislava to Zilina and did a walking tour of the stadium, he said.

"You could just tell the parts of the stadium that were just renovated and which part existed from the '40s," Simpson said. "I had seen some old photography from the era, and it was clear that the main grandstand had probably been there for about 80 years or more."

Simpson sent letters to the Jewish community in Zilina and also the president of the local soccer (known as football in Europe) club MSK Zilina, he said. The entire project only took six weeks to complete, Simpson said.

One of the things Simpson wanted to be careful with was not to make this a triumph for himself but the victims, he said. When the plaque was finally installed, Simpson said he felt like a hidden history had finally been publicly acknowledged.

Soccer in the camps

When Simpson first wrote his book "Soccer Under the Swastika: Stories of Survival and Resistance during the Holocaust" he discovered a photo taken in 1933 not long after Dachau opened outside of Munich of guys without shoes in tattered clothes kicking a soccer ball around.

He found this very strange because these were the camps where people were sent to be punished and murdered, Simpson said. As Simpson continued to research, he found more testimonies and photos of this happening all over Europe.

The project came together quickly, and Simpson could organize it by country, he said. Simpson saw how soccer captivated countries like Czechoslovakia, Germany, Poland and Ukraine not only outside the war context but also during the war, he said.

Through soccer, the forced laborers were able to hold on to their human dignity and their free life, Simpson said.

"What a lot of people don't realize in many of these camps, especially if there was a labor aspect to it, not just extermination, there was a lot of boredom," Simpson said. "There was a lot of downtime, so it was a way to fill those hours for the guards, for the leadership, for the prisoners who again maybe had some privilege."

Many of the survivors downplayed this portion of life at the camps because of survivor's guilt, Simpson said. If a forced laborer received extra rations it means that someone else was giving up theirs, he said.

Simpson and Vanek won the award together for their work on the memorial and exhibit. Winning the award was very gratifying, Simpson said.

Along with Vanek, Simpson said he was very grateful to the kindness of the many people who contributed to the project in Slovakia as well as those who helped reconstruct the histories and testimonies of the forced laborers.

"This really was the power of collaboration," he said.

Along with the award, prize money was awarded to Simpson and Vanek. Simpson did not say how much was awarded but did say he wanted to take the exhibit to Germany and maybe reinitiate some projects focusing on the rescuers.

Simpson said being a rescuer at that time was a very dangerous thing and that he would love to tell more of those stories.

For now, Simpson is back to teaching at JBU and said he is grateful for all of the local support he has received for what he is doing on campus.

Simpson incorporated a lot of what he taught in Slovakia into his course load at JBU, he said. In the spring of 2021, he was able to bring in Vanek as a special speaker via Zoom.

Another part of why Simpson does what he does is to show students at JBU who have not had much exposure to people of the Jewish culture a little bit about what that entails.

"So for me, it's a way to normalize Jewish history and also because we are a Christian university helped them to see that Christianity is grafted onto the Jewish trunk basically and so we shouldn't really look at those as separate histories," Simpson said. 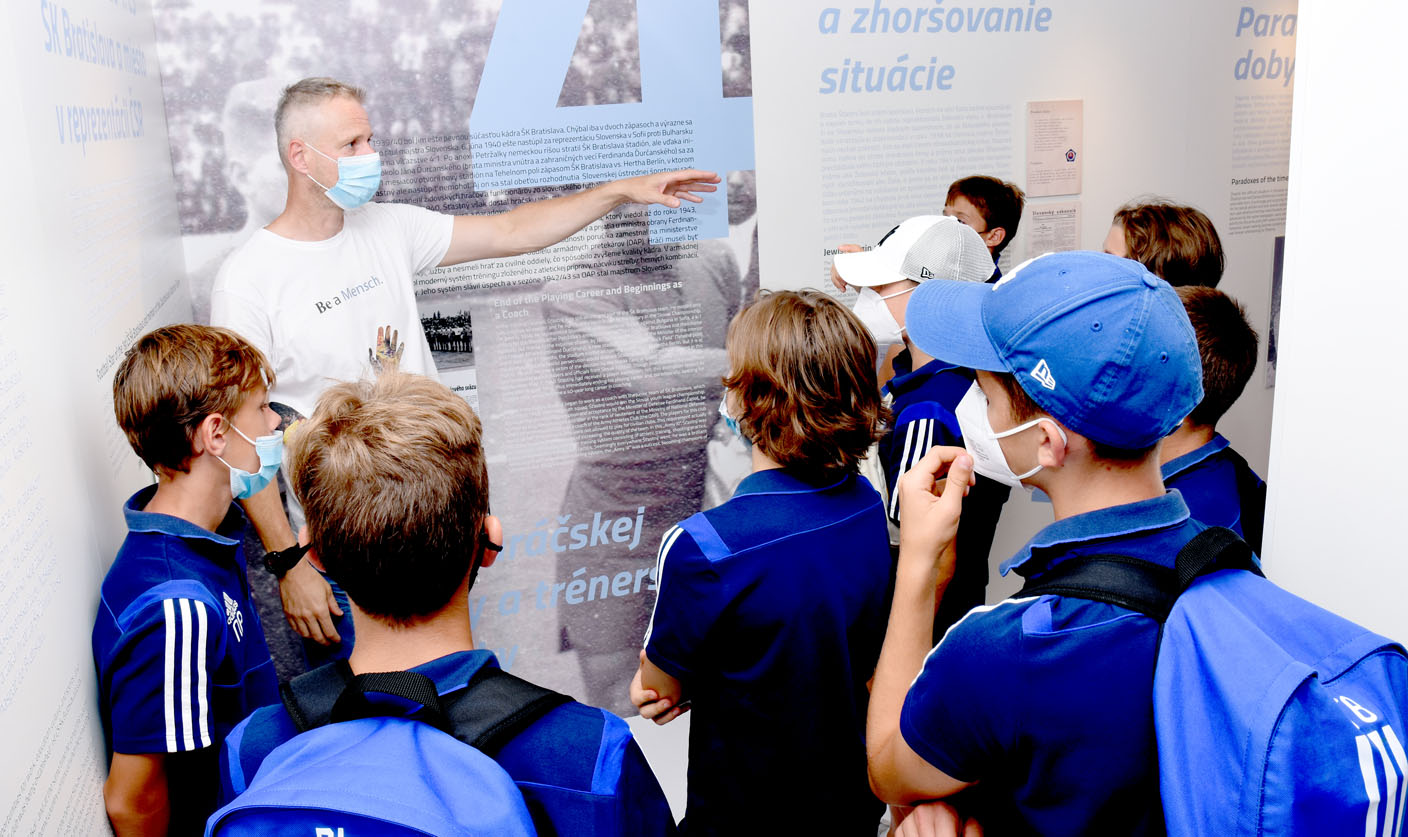 Photo submitted JBU Professor Dr. Kevin Simpson (third from left), shows some young soccer players part of an exhibit at the Museum of Jewish Culture in Bratislava, Slovakia. Simpson spent a semester in Slovakia teaching about the relation between the Holocaust and soccer. Photo submitted A memorial to the more than 250 Jewish forced laborers who helped build portions of the Stadion pod Dubnom in the 1940s in Zilina, Slovakia. JBU Professor Dr. Kevin Simpson was one of the people who helped bring the memorial to life.