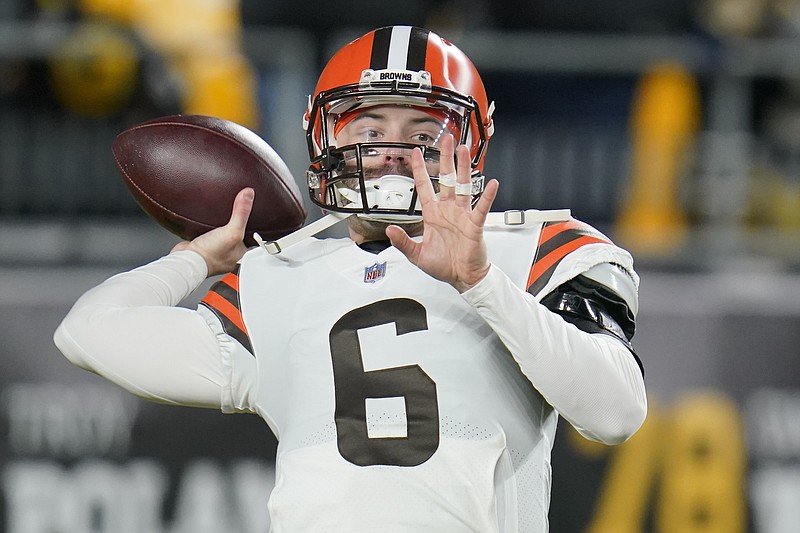 Cleveland Browns quarterback Baker Mayfield (6) warms up before an NFL football game against the Pittsburgh Steelers, Monday, Jan. 3, 2022, in Pittsburgh. Browns general manager Andrew Berry said Tuesday, Jan. 11 the team expects Mayfield to return as its starter next season and rebound after an injury-filled 2021 that raised questions about his future with Cleveland.(AP Photo/Gene J. Puskar)

Baker Mayfield has shifted into comeback mode. The Cleveland Browns quarterback had successful surgery Wednesday to repair a torn labrum in his left shoulder, an injury that affected his play, led to a disappointing season and raised doubts about his future in Cleveland. Mayfield posted a video on social media following the procedure, which was done in Los Angeles. Mayfield, who only missed one game with the injury, will need up to six months of rehab, but is expected to be fully recovered by the time the Browns hold offseason workouts -- assuming, of course, he's still with the team. The Browns said they anticipate Mayfield will begin "light throwing" in April.

Tampa Bay Buccaneers Coach Bruce Arians said he'll appeal a $50,000 fine imposed by the NFL for slapping the helmet of one of his players during last Sunday's 31-15 NFC playoff victory over the Philadelphia Eagles. Arians said he was trying to prevent safety Andrew Adams from drawing a penalty for pulling players out of a pile when he stepped a short distance off the sideline and struck the player's helmet with his hand before trying to push Adams away from Eagles players. At the bottom of the pile, the Bucs' Ross Cockrell had recovered a muffed punt, giving the defending Super Bowl champions the ball at the Philadelphia 48. Five plays later, Tom Brady threw a 2-yard touchdown pass to Rob Gronkowski, putting Tampa Bay up 24-0. The Bucs host the Los Angeles Rams in the NFC divisional round on Sunday.

The Green Bay Packers have released defensive lineman Kingsley Keke, who made eight starts this season but hadn't played at all in their past three games. This move comes as the Packers prepare to host the San Francisco 49ers in an NFC divisional playoff game Saturday night. Keke played 64% of the Packers' defensive snaps in a 31-30 victory at Baltimore on Dec. 19, but was left inactive the following week despite not appearing on the injury report. Packers Coach Matt LaFleur explained it by saying "that was a total personal thing we were going through" without going into specifics. Keke had 23 tackles, 2½ sacks and a forced fumble in 12 games this season. He had missed the Packers games on Nov. 7 at Kansas City and Nov. 14 against Seattle because of a concussion.

Georgia quarterback Stetson Bennett is returning for another season after leading the Bulldogs to their first national championship in 41 years. Bennett, who carried a flip phone and avoided social media during the 2021 season, made an exception to his policy by posting the words "One More Year" on his Instagram account on Wednesday. Bennett began his Georgia career as a walk-on. He then transferred to a Mississippi junior college before returning to the Bulldogs. As a senior in 2021, Bennett replaced JT Daniels as the starter and then kept the job. Bennett will take advantage of the NCAA's "Super Senior" rule to use the added year of eligibility granted in 2020 because of the pandemic. Daniels, who transferred to Georgia from Southern Cal, has again entered the transfer portal as he seeks a new school for his final year of eligibility. Georgia wide receiver Jermaine Burton also entered the transfer portal Wednesday.

NBC will not be sending its announcers and most hosts to the Beijing Olympics due to continued concerns about rising covid-19 cases worldwide and China's strict policy about those who test positive. It will be the second consecutive Games for which the broadcast teams will work mostly out of NBC Sports headquarters in Stamford, Conn., rather than the host city. NBC Sports spokesman Greg Hughes said in a phone interview the network no longer plans to send announcing teams for Alpine skiing, figure skating and snowboarding to China. Those had been among the handful of announcers expected to travel, but NBC's plans changed over the past couple of weeks.

The Denver Nuggets acquired veteran wing player Bryn Forbes from San Antonio on Wednesday as part of a three-team deal that also included Boston. The Nuggets sent injured players Bol Bol and P.J. Dozier to Boston, and the Celtics dealt Juancho Hernangomez to San Antonio. The Spurs also will receive a future second-round draft pick from the Nuggets. The deal was first reported by ESPN. For the Nuggets, the move gives them a solid outside shooter in Forbes and the potential to add another player. The team is believed to have interest in veteran big man DeMarcus Cousins to help the frontcourt depth behind reigning NBA MVP Nikola Jokic for a playoff run. And for Boston, the move will mean getting much closer to dropping below the luxury tax threshold this season. The Nuggets were looking for more of an outside threat in a season when they are missing max players Jamal Murray (knee) and Michael Porter Jr. (back) due to injuries. Forbes is shooting 41.7% from three-point range this season and averaging 9.1 points.

Despite postponing more than 100 games for coronavirus-related reasons, the NHL is still on track to complete the regular season on time by the end of April. While it came at the expense of players competing in the Beijing Olympics, the new schedule keeps the top hockey league in the world on pace to award the Stanley Cup before July 1. The NHL on Wednesday revealed new dates for 98 postponed games, keeping the initial target date of April 29 for the end of the regular season. That would allow the traditional 16-team playoffs to begin in early May as originally planned. The changes include moving 23 other games around and 95 games filling the Feb. 7-22 gap that previously was scheduled for the Olympic break. After the league and players union agreed to participate in the Olympics, the decision was made in late December to skip the Games in order to get through the 1,312-game season -- the most in NHL history. A total of 104 games have been postponed this season, including dozens linked to attendance restrictions in Canada.

Washington Capitals defenseman Dmitry Orlov has been suspended two games for kneeing Winnipeg Jets forward Nikolaj Ehlers. The NHL department of player safety announced the suspension Wednesday after holding a hearing with Orlov and his representatives. Orlov was not penalized for the knee-on-knee hit late in regulation of the Capitals' game against the Jets on Tuesday night. Ehlers was injured on the play and is considered out indefinitely. 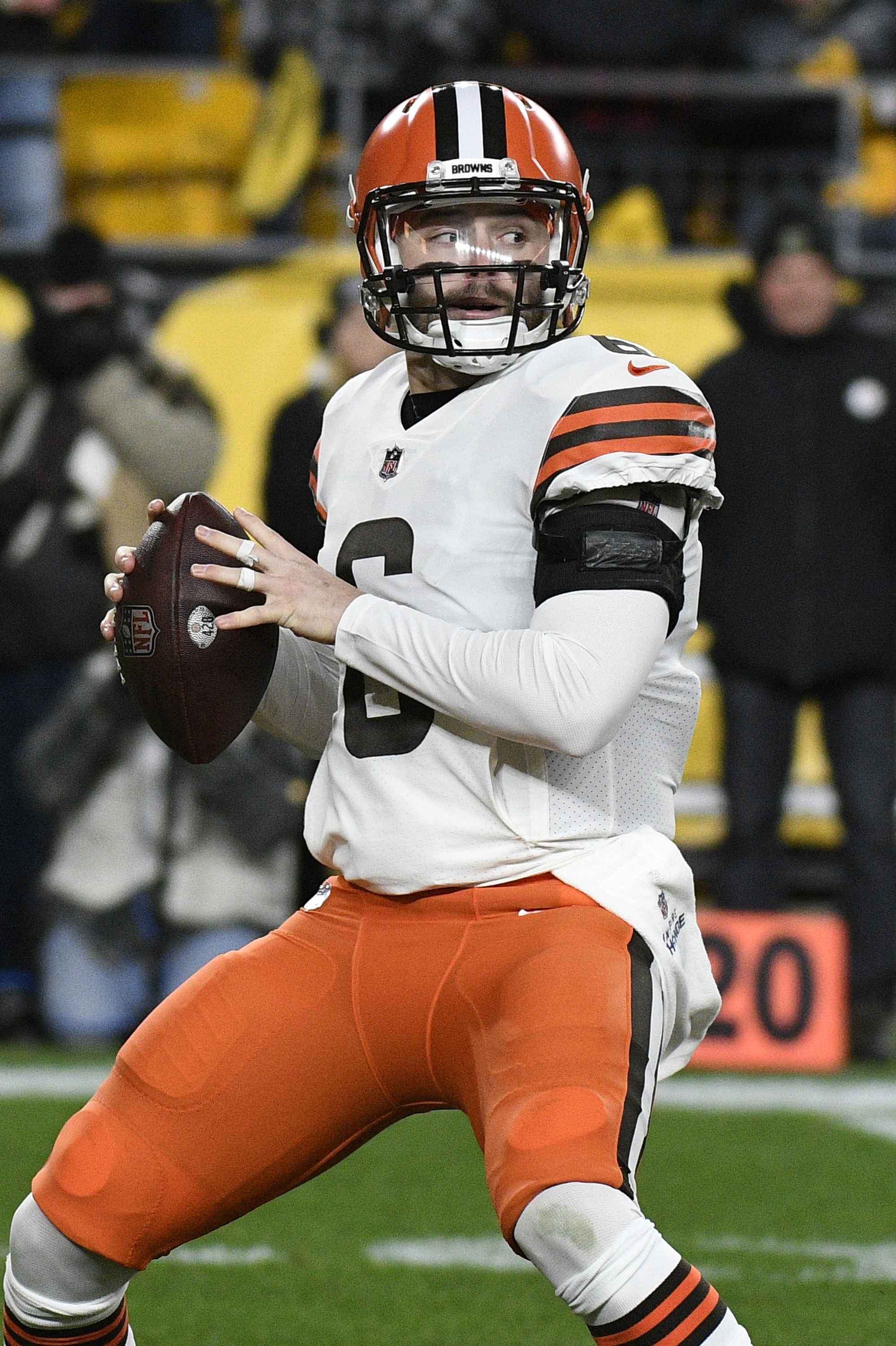