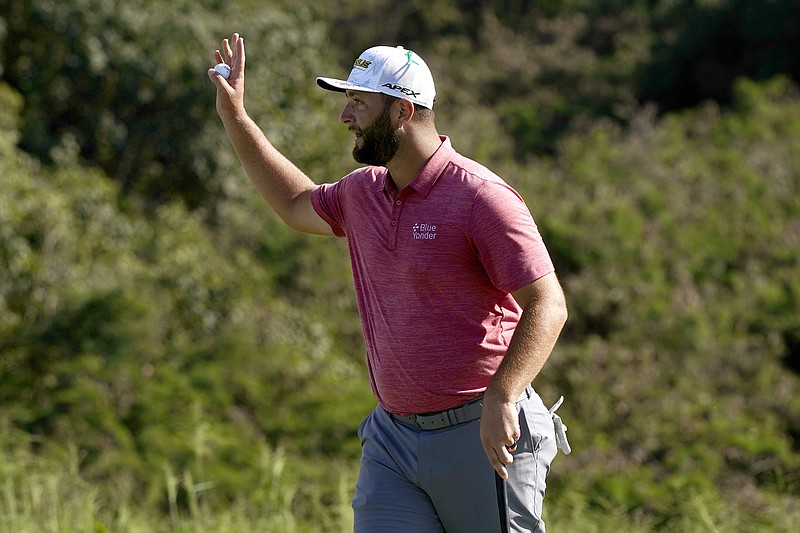 Jon Rahm, of Spain, waves after finishing the final round of the Tournament of Champions golf event, Sunday, Jan. 9, 2022, at Kapalua Plantation Course in Kapalua, Hawaii. (AP Photo/Matt York)

LA QUINTA, Calif. -- Jon Rahm is back in the California desert for The American Express after a two-year break. It feels as though the top-ranked Spaniard never left his Arizona home.

"I would say the demographic might be a little bit older here, but it pretty much is the Scottsdale of California," Rahm said Wednesday.

After winning the 2018 tournament in a playoff and finishing sixth the following year, the burly former Arizona State player couldn't fit the event into his schedule in 2020 and was unable to play last year because of a minor back injury.

"I'm happy to be back," Rahm said. "It's a place I've been coming to for a very long time, played in college. ... So, I feel comfortable. I live in the desert."

Rahm opened the year two weeks ago in Hawaii by finishing at 33 under in a one-stroke loss to Cameron Smith in the Sentry Tournament of Champions.

"It was a bit of a bittersweet feeling because you can't help to feel good about the game and how good I played, but I still finished second," Rahm said.

He will open today at La Quinta Country Club, playing alongside Tony Finau and two amateurs. They will play PGA West's Nicklaus Tournament Course on Friday and the adjacent Stadium Course on the weekend.

"If the wind doesn't pick up, you know you're going to have to go out there and post a score," Rahm said. "But we all know it, so it's almost like a green light to be aggressive."

He'll head to the coast next week for the Farmers Insurance Open at Torrey Pines, the site of his U.S. Open victory last summer and his first PGA Tour title in 2017. The San Diego venue has a home feel.

"That coastline reminds me of home quite a bit," Rahm said. "The weather is similar to what I grew up in."

FedExCup champion Patrick Cantlay is coming off a fourth-place finish in the Tournament of Champions. Last year, the former UCLA player closed with a Stadium-record 61 to finish a shot behind winner Si Woo Kim.

"I feel like I knocked off a bit of rust in Maui after not playing for a good little bit," Cantlay said. "I'm going to have a bunch of starts here coming up, so that's exciting to try and get into a groove and get the year started off right."

Ranked fourth, Cantlay will open at La Quinta in a group with Scottie Scheffler.

"This is great place for me to start the year," Scheffler said. "Outside of trying to be at Kapalua every year, this is a good place to start in the 48 states. Great weather. Golf courses are in good shape."

Tournament host Phil Mickelson is making his 19th appearance in the event he won in 2002 and 2004. He will play alongside Rickie Fowler the first three rounds, also starting at La Quinta. Fowler is making his first start since his wife gave birth to their first child in November.