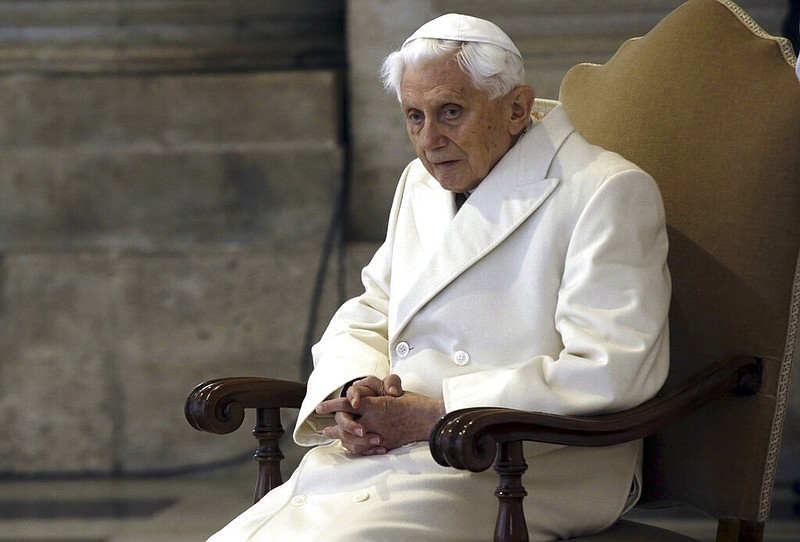 FILE - Pope Emeritus Benedict XVI sits in St. Peter's Basilica as he attends the ceremony marking the start of the Holy Year, at the Vatican, Dec. 8, 2015. (AP/Gregorio Borgia, File)

BERLIN — A long-awaited report on sexual abuse in Germany's Munich diocese on Thursday faulted retired Pope Benedict XVI's handling of four cases when he was archbishop in the 1970s and 1980s. The law firm that drew up the report said Benedict strongly denies any wrongdoing.

The findings were sure to reignite criticism of Benedict's record more than a decade after the first, and until Thursday only, known case involving him was made public.

The archdiocese commissioned the report from law firm Westpfahl Spilker Wastl nearly two years ago, with a mandate to look into abuse between 1945 and 2019 and whether church officials handled allegations correctly. The law firm examined church files and spoke to witnesses.

Top church officials weren't informed of the results ahead of publication. The current archbishop — Cardinal Reinhard Marx, a prominent reformist ally of Pope Francis — was faulted in two cases.

Marx's predecessors include the former Cardinal Joseph Ratzinger, who served in Munich from 1977 to 1982 before becoming the head of the Vatican's Congregation for the Doctrine of the Faith and later being elected pope. Benedict gave extensive written testimony for the report.

"In a total of four cases, we came to the conclusion that the then-archbishop, Cardinal Ratzinger, can be accused of misconduct," said one of the reports' authors, Martin Pusch.

Two of those cases, he said, involved perpetrators who offended while he was in office and were punished by the judicial system but were kept in pastoral work without express limits on what they were allowed to do. No action was ordered under canon law.

In a third case, a cleric who had been convicted by a court outside Germany was put into service in the Munich archdiocese and the circumstances speak for Ratzinger having known of the priest's previous history, Pusch said.

When the church abuse scandal first flared in Germany in 2010, attention swirled around another case: that of a pedophile priest whose transfer to Munich to undergo therapy was approved under Ratzinger in 1980.

The priest was allowed to resume pastoral work, a decision that the church has said was made by a lower-ranking official without consulting the archbishop. In 1986, the priest received a suspended sentence for molesting a boy.

Another of the report's authors, Ulrich Wastl, said Benedict's claim not to have attended a meeting in 1980 in which the priest's transfer to Munich was discussed lacks credibility.

"In all cases, Emeritus Pope Benedict XVI strictly denies any wrongdoing on his part," Pusch said, and the retired pontiff cites largely "lack of knowledge of the facts and a lack of relevance under canon and criminal law." But he added that the assertions of lack of knowledge were sometimes "hard to reconcile" with the contents of church files.

"To us, this is not shocking news," SNAP, a network representing survivors of sex abuse by clergy, said in a statement. "Sadly, we see these unsavory actions and inactions surface years later after lengthy silence by church officials and painful memories harbored by victims."

Vatican spokesman Matteo Bruni said the Holy See wouldn't comment until it had read the report in full and could give the contents "careful and detailed examination."

"In reiterating shame and remorse for abuses committed by clerics against minors, the Holy See expresses its closeness to all victims and reaffirms the efforts undertaken to protect minors and ensure safe environments for them," he said in an emailed statement.

Benedict's legacy as pope had already been colored by the global eruption in 2010 of the sex abuse scandal, although as a cardinal he was responsible for turning around the Vatican's approach to the issue.

Benedict gained a global and firsthand knowledge of the scope of the problem when he took over at the Congregation for the Doctrine of the Faith in 1982, after his time in Munich. Ratzinger took the then-revolutionary decision in 2001 to assume responsibility for processing those cases after he realized bishops around the world weren't punishing abusers but were just moving them from parish to parish where they could rape again.

The report runs to nearly 1,900 pages, including annexes among which are Benedict's written responses, redacted to black out names.

It points to at least 497 abuse victims over the decades and at least 235 suspected perpetrators, though the authors said that in reality there were probably many more.

Cardinal Friedrich Wetter, Munich's archbishop from 1982 until Marx took over in 2008, was faulted over his handling of 21 cases. Pusch said he also denies wrongdoing.

In an extraordinary gesture last year, Marx offered to resign over the Catholic Church's "catastrophic" mishandling of clergy sexual abuse cases, declaring that the scandals had brought the church to "a dead end."

Francis swiftly rejected the offer but said a process of reform was necessary and that every bishop must take responsibility for the "catastrophe" of the abuse crisis.

Marx didn't mention either Benedict's role or his own in a brief appearance hours after the report was released, but did offer an apology.

"As archbishop of Munich and Freising, I feel that I share responsibility for the church as an institution over recent decades," he said. "So as the serving archbishop, I apologize for the suffering that was caused to people" in church institutions, he added.

Marx added that church officials will consider "results and further consequences" as they study the report, and he hopes for initial conclusions next Thursday. He said that dealing with abuse is inseparable from reform of the church.

In 2018, a separate church-commissioned report concluded that at least 3,677 people were abused by clergy in Germany between 1946 and 2014. More than half of the victims were 13 or younger, and nearly a third served as altar boys.

In recent months, turbulence in the Cologne archdiocese over officials' handling of abuse allegations has convulsed the German church. A report last year found that the archbishop of Hamburg, a former Cologne church official, neglected his duty in several cases in handling such allegations, but Francis rejected his resignation offer.

That report cleared Cologne's archbishop of wrongdoing, but Cardinal Rainer Maria Woelki's handling of the issue infuriated many Catholics. In September, the pope gave Woelki a several-month "spiritual timeout" after what the Vatican called "major errors" of communication.