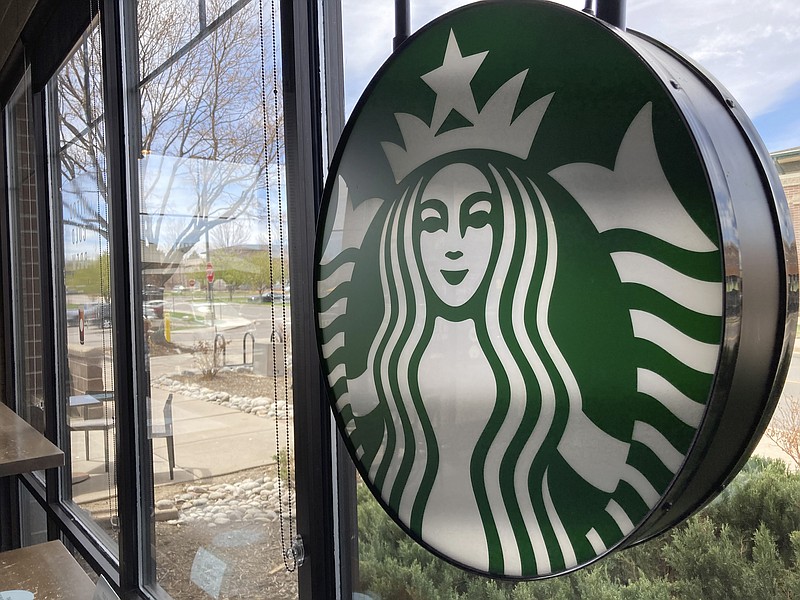 A sign bearing the corporate logo hangs in the window of a Starbucks open only to take-away customers in this photograph taken Monday, April 26, 2021, in southeast Denver. Starbucks is no longer requiring its U.S. workers to be vaccinated against COVID-19, reversing a policy it announced earlier this month. The Seattle coffee giant says, Wednesday, Jan. 19, 2022, it's responding to last week&#x2019;s ruling by the U.S. Supreme Court. (AP Photo/David Zalubowski)

Starbucks is no longer requiring its U.S. workers to be vaccinated against covid-19, reversing a plan it announced earlier this month.

In a memo sent Tuesday to employees, the Seattle coffee giant said it was responding to last week's ruling by the U.S. Supreme Court. In a 6-3 vote, the court rejected the Biden administration's plan to require vaccinations or regular covid testing at companies with more than 100 workers.

"We respect the court's ruling and will comply," Starbucks Chief Operating Officer John Culver wrote in the memo.

Starbucks' reversal is among the most high-profile corporate actions in response to the Supreme Court ruling. The company employs 228,000 people in the U.S.

Boston-based General Electric Co. also suspended its vaccination mandate last week, according to the union that represents machinists, electricians and other GE employees. GE, which employs 56,000 people in the U.S., had initially called for employees to get fully vaccinated no later than Feb. 11.

But other companies have kept their mandates in place. Citigroup Inc., one of the largest U.S. banks, announced in October that employees needed to be vaccinated or receive an accommodation by Jan. 14. New York-based Citi said Wednesday that 99% of its employees have complied so far.

Work clothing maker Carhartt also stuck to its vaccination mandate. The Dearborn, Mich.-based company, which has 3,000 U.S. workers, told employees in an email Friday that the Supreme Court decision wouldn't impact its own mandate, which went into effect this month.

"Carhartt fully understands and respects the varying opinions on this topic, and we are aware some of our associates do not support this policy. However, we stand behind our decision because we believe vaccines are necessary to protect our workforce," the company said.

Carhartt said the "vast majority" of its employees have gotten vaccinated. The company has also granted some medical or religious waivers.

Some big companies like Target and McDonald's stayed mum on their vaccination plans for front-line workers as the issue moved through the courts. Many companies, facing labor shortages, have been loath to force requirements on workers, who might choose to go elsewhere.

A November survey of more than 500 U.S. companies by the consulting firm Willis Towers Watson showed that few employers with vaccination requirements -- 3% -- had seen spikes in resignations. But nearly one-third of those planning mandates said they were very concerned that the mandates could cause employees to leave. On the other hand, nearly half of employers surveyed believe that vaccination mandates could help recruit and retain employees.

On Jan. 3, Starbucks said it would require all employees to be vaccinated by Feb. 9 or face a weekly covid test requirement, citing the Biden administration's rules. At the time, Culver said it was the responsibility of Starbucks' leadership "to do whatever we can to help keep you safe and create the safest work environment possible."