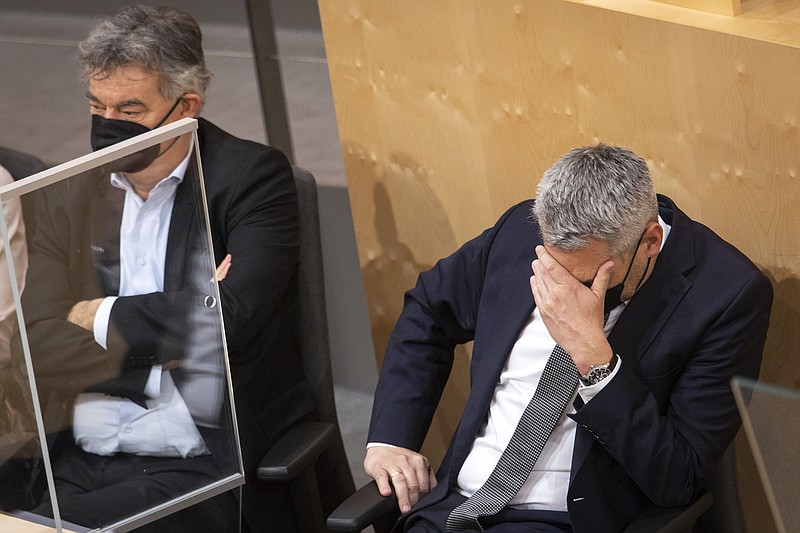 VIENNA -- Austria's parliament voted Thursday to introduce a covid-19 vaccine mandate for adults from Feb. 1, the first of its kind in Europe, with maximum potential fines of up to $4,000 for people who don't comply after a series of reminders.

Lawmakers voted 137 to 33 in favor of the measure, which will apply to all Austrian residents aged 18 and over. Exemptions are made for pregnant women, people who for medical reasons can't be vaccinated or who have recovered from the coronavirus in the previous six months.

Officials say the mandate is necessary because vaccination rates remain too low in the small Alpine country. They say it will ensure that Austria's hospitals are not overwhelmed with covid-19 patients.

Health Minister Wolfgang Mueckstein, speaking in parliament Thursday afternoon, called the measure a "big, and, for the first time, also lasting step" in Austria's fight against the pandemic.

"This is how we can manage to escape the cycle of opening and closing, of lockdowns," he said, noting that it's about fighting not just omicron, but any future variants that might emerge. "That is why this law is so urgently needed right now."

As of Thursday, about 72% of the population of 8.9 million was considered fully vaccinated.

The measure passed easily in parliament after a fierce debate. Chancellor Karl Nehammer's governing coalition, made up of his conservative Austrian People's Party and the Greens, worked with two of the three opposition parties in parliament on the plan. The far-right Freedom Party vehemently opposed it.

[Video not showing up above? Click here to watch » arkansasonline.com/121spaincovid/]

Speakers from the four other parties criticized what they said were the Freedom Party's deliberate attempts to stoke anti-vaccine sentiments in Austria, accusing it of spreading deliberate falsehoods about the safety and effectiveness of available vaccines.

Pamela Rendi-Wagner, head of the opposition Social Democrats, said the vaccine mandate is something "that we all didn't want," but that it "has unfortunately become necessary to close this vaccination gap that still exists in Austria."

Once the mandate goes into effect in February, authorities will write to every household to inform them of the new rules.

From mid-March, police will start checking people's vaccination status during routine checks; people who can't produce proof of vaccination will be asked in writing to do so, and will be fined up to $685 if they don't.

If authorities judge the country's vaccination progress still to be insufficient, Nehammer said they would then send reminders to people who remain unvaccinated. If even that doesn't work, people would be sent a vaccination appointment and fined if they don't keep it.

With one of Europe's highest vaccination rates and its most pandemic-battered economies, the Spanish government is laying the groundwork to treat the next infection surge not as an emergency but an illness that is here to stay.

[Video not showing up above? Click here to watch » arkansasonline.com/121merck/]

Officials in Spain credited draconian measures with preventing a full collapse of the health system. Lives were saved, they argued.

The idea is to move from crisis mode to control mode, approaching the virus in much the same way countries deal with flu or measles. That means accepting that infections will occur and providing extra care for at-risk people and patients with complications.

Similar steps are under consideration in neighboring Portugal and in Britain.

Spain's center-left prime minister, Pedro Sanchez, wants the European Union to consider similar changes now that the surge of the omicron variant has shown that the disease is becoming less lethal.

"What we are saying is that in the next few months and years, we are going to have to think, without hesitancy and according to what science tells us, how to manage the pandemic with different parameters," he said Monday.

Sanchez said the changes should not happen before the omicron surge is over, but officials need to start shaping the post-pandemic world now: "We are doing our homework, anticipating scenarios."

The World Health Organization has said that it's too early to consider any immediate shift. The organization does not have clearly defined criteria for declaring covid-19 an endemic disease, but its experts have previously said that it will happen when the virus is more predictable and there are no sustained outbreaks.

"It's somewhat a subjective judgment because it's not just about the number of cases. It's about severity, and it's about impact," said Dr. Michael Ryan, the WHO's emergencies chief.

The European Centre for Disease Prevention and Control has advised countries to transition to more routine handling of covid-19 after the acute phase of the pandemic is over. The agency said in a statement that more EU states in addition to Spain will want to adopt "a more long-term, sustainable surveillance approach."

Just over 80% of Spain's population has received two vaccine doses, and authorities are focused on boosting the immunity of adults with third doses.

Vaccine-acquired immunity, coupled with widespread infection, offers a chance to concentrate prevention efforts, testing and illness-tracking resources on moderate- to high-risk groups, said Dr. Salvador Trenche, head of the Spanish Society of Family and Community Medicine, which has led the call for a new endemic response.

Covid-19 "must be treated like the rest of illnesses," Trenche told The Associated Press, adding that "normalized attention" by health professionals would help reduce delays in treatment of problems not related to the coronavirus.

The public also needs to come to terms with the idea that some deaths from covid-19 "will be inevitable," Tranche said.

The Spanish Health Ministry said it was too early to share any blueprints being drafted by its experts and advisers, but the agency confirmed that one proposal is to follow an existing model of "sentinel surveillance" currently used in the EU for monitoring flu.

The strategy has been nicknamed "flu-ization" of covid-19 by Spanish media, although officials say that the systems for influenza will need to be adapted significantly to the coronavirus.

For now, the discussion about moving to an endemic approach is limited to wealthy nations that can afford to speak about the worst of the pandemic in the past tense. Their access to vaccines and robust public health systems are the envy of the developing world.

Many countries overwhelmed by the record number of omicron cases are already giving up on massive testing and cutting quarantine times, especially for workers who show no more than cold-like symptoms. Since the beginning of the year, classes in Spanish schools stop only if major outbreaks occur, not with the first reported case as they used to.

In Portugal, with one of the world's highest vaccination rates, President Marcelo Rebelo de Sousa declared in a New Year's speech that the country had "moved into an endemic phase." But the debate over specific measures petered out as the spread soon accelerated to record levels -- almost 44,000 new cases in 24 hours reported Tuesday.

However, hospital admissions and deaths in the vaccinated world are proportionally much lower than in previous surges.

In the United Kingdom, mask-wearing in public places and covid-19 passports will be dropped on Jan. 26, Prime Minister Boris Johnson announced Wednesday saying that the latest wave had "peaked nationally."

The requirement for infected people to isolate for five full days remains in place, but Johnson said he will seek to scrap it in coming weeks if the virus data continues to improve.

For some other European governments, the idea of normalizing covid-19 is at odds with their efforts to boost vaccination among reluctant groups.

In Germany, where less than 73% of the population has received two doses and infection rates are hitting new records almost daily, comparisons to Spain or any other country are being rejected.