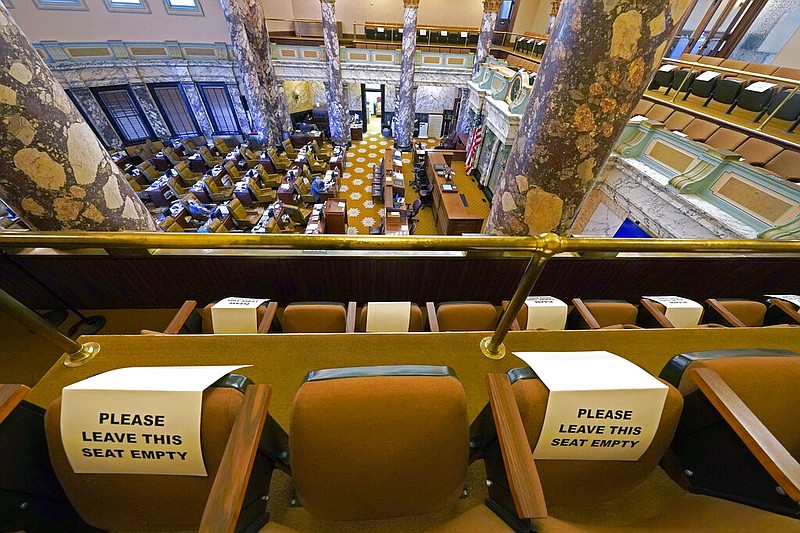 The Mississippi Senate Chamber of the Capitol in Jackson, Miss., is seen from the gallery, which has implemented social distancing protocols, in this Jan. 3, 2022, file photo. (AP/Rogelio V. Solis)

JACKSON, Miss. — Black lawmakers walked out in protest Friday and withheld their votes as the Mississippi Senate passed a bill that would ban schools from teaching critical race theory.

The state superintendent of education has said critical race theory is not being taught in Mississippi schools and legislators have offered no evidence to show it is.

“This bill is not morally right,” Democratic Sen. Barbara Blackmon, who is Black, said during the debate.

The bill’s chief sponsor, Republican Sen. Michael McLendon of Hernando, who is white, said hundreds of constituents have told him they have heard about the theory on national news and they don’t want it taught to their children.

McLendon struggled to define critical race theory when he was asked about it. But he said: “Systematic racism should not be taught to our children.”

Critical race theory is an academic framework that examines how racism has shaped public policy and institutions such as the legal system, and how those have perpetuated the dominance of white people in society.

Republicans control the Mississippi House and Senate. Gov. Tate Reeves and House Speaker Philip Gunn are among the GOP leaders who have publicly said critical race theory is harmful.

Black senators walked out of the Mississippi Senate chamber before the vote on Senate Bill 2113. It passed 32-2, with the only votes against the bill coming from two white Democrats.

The bill will move to the House for more work.

“Critical race theory” is in the title of the bill, but the main text of the bill does not define the phrase. The bill says no school, community college or university could teach that any “sex, race, ethnicity, religion or national origin is inherently superior or inferior.”

“I’m trying to find the mischief in this language, and I don’t see it,” said Republican Sen. Chris McDaniel of Ellisville, who is white.

McDaniel said the bill would have been considered “the most dynamic piece of civil rights legislation in this state’s history” if it had been introduced in the 1950s. At that time, schools were segregated, the state Legislature was all-white and Black people faced violent repercussions for trying to vote.

Democratic Sen. John Horhn of Jackson, who is Black, questioned whether the bill could prevent schools from teaching about the late U.S. Sen. James O. Eastland of Mississippi, who led an effort to block anti-lynching legislation in 1948, or the Sovereignty Commission, a state spy agency created in 1956 to support a system of white supremacy. The commission was defunded in 1977.

“The whole situation of it is based on the founding of this country and some of the precepts that we, as a country, implicitly or explicitly accepted — chief among which we justified slavery because powers that be judged Black people to be racially inferior,” Horhn said. “And a lot of our laws, a lot of our systems, a lot of our customs, a lot of our practices have been impacted by that.″

Democratic Sen. David Blount of Jackson, who is white and voted against the bill, asked McLendon whether Mississippi should ban other things schools are not teaching, such as whether the sun rotates around the Earth.

“We trust our teachers to teach,” Blount said. “And we don’t need to pass laws to prohibit what’s not being done.″